...till that glorious first day of school!!

Have you ever noticed that this time of year kind has the same exhausted feel of a dimming Sunday evening after a busy, hectic weekend?

Have you ever noticed how beautiful the late summer wildflowers are? I will never tire of Queen Anne's lace or yarrow orblack-eyed susans or goldenrod. (in fact, this is how Brian and I were able to afford most of our decor for our wedding reception 15+ years ago....at the end of August we picked bunches of the wildflowers and hung them to dry until November!)

Have you ever noticed how much our bodies actually need routine and don't need so much ice cream??

these are my ponderings on the last day of August...
talk to you soon!
at 3:17 PM

a few people have told me that they are getting sick of seeing the last post i wrote .... the problem is that i have had very few moments to reflect lately. our schedule has been busy in (mostly!) good ways...lots of time being with people we love and working together toward meaningful goals...lots of time with my kids whom i love and will love even more when they go back to school!
so, for right now, this is all i got...i imagine one of these days soon (probably September 6 at 9am, right after i drop my daughters off to their classrooms) i'll get bowled over by a truckload of thoughts and feelings and God will meet me in some wonderful way and i'll have so much to say after that, you all will be sick of me!
until then, the verse that God gave me for this crazy, difficult summer...


"Give your attention to what God is doing right now, and don't get worked up about what may or may not happen tomorrow.
God will help you deal with whatever hard things come up when the time comes." -- Matthew 6:34

...and this quote...
"The fly that clings to honey hinders its flight, and the soul that allows itself attachment to spiritual sweetness hinders its own liberty..." -- St. John of the Cross
at 8:46 AM

a couple of quotes from Andy Stanley, in his book Visioneering,

"God-ordained visions are always too big for us to handle."
( consider the source!)

"Few things provide our faith with a more thorough workout than a divinely-ordered vision. Faith is simply an expression of confidence in the person and character of God. Embracing and owning a vision is in itself an act of faith. Pursuing a divine vision is really an act of worship. It is a declaration of our confidence in God. It is a proclamation of how important we believe his agenda to be. And God is honored."
at 8:43 AM

Life has moved at a rapid-fire pace since we returned home from Deleware. I have missed my little blogging community.

God is continuing His faithfulness to me in my helpless and ususally- flesh-laden pursuit of Him. I am grateful.

Over vacation I read Jane Eyre by Charlotte Bronte. I have never read this classic and one of my goals this summer is to catch up on some classic writings. (Thankfully, B&N sells them cheap!) I won't go on a rant about how my growing-up "Christian" education completely ignored the classic works in literature, art and even theology, BUT...I'm finding that I approach classics with a bias that I must have picked up in those moldable childhood days. I have kind of approached these classics the same way I approach ab-crunches. I know they are good for me but I don't expect to enjoy them!

That is the attitude I took on when I opened up the novel. I prepped myself internally, "OK, Tam, you can do this. Go ahead and start reading. If it gets too depressing you have my permission to close the book without feeling like an intellectual failure."

Imagine my surprise as I fell in love with the character of Jane Eyre. Imagine my surprise as I found myself caught up in the plotline that has since the days of Bronte been hashed and re-hashed by both skilled author and poor imitator alike. Imagine my surprise as I fell in love with the gruff and macho Mr. Rochester and tried to reason with Jane as she made the moral decision to walk away from the relationship instead of marry him. Imagine my surprise when I read Jane's dilemma to do what is right instead of following her feelings -- and seemingly her dreams -- and my absolute shock that some of the most powerful biblical truth I've read all summer came from the pages of a nineteenth-century work of fiction. The passage Jane speaks to herself about resisting temptation is powerful...I am tempted to have my entire family memorize it. I know that it would serve me well as I face more temptation than I ever expected as an adult, mother and wife.

May I share this with you? I've included the whole scene for those of you who want to take in all the whole romance of it, but for the rest of you I've bolded and colored the most profound paragraphs...you can scroll down to find them. 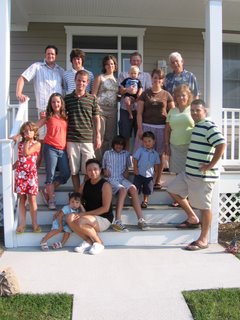 this is the 17 of us (actually you only see 16 'cuz my mom is taking the picture) in front of the house we rented for the week...i feel very blessed!
at 3:57 AM