lessons from a three-year-old, Brennan Manning and The Notebook 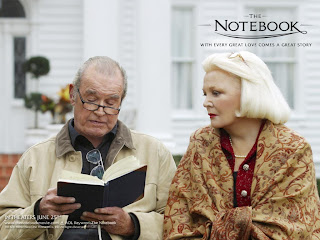 Last week a leader asked me to ask God to show me an area in my life that is not characterized by holiness.
I groaned.
I moaned.
I writhed with wailing and gnashing of teeth.
"I don't even have to ask Him. I know what it will be. It's always one from the list TOP-THREE-THINGS-WRONG-WITH-TAMARA-THAT-GOD-DISLIKES-ABOUT-HER:
1. her weight
2. her lack of resemblance to The-World's-Best-Mother (which includes a general lack of joy in cooking and cleaning and attending children's soccer games, et al)
3. her complete dislike and avoidance of budgets, diets, schedules and speed limits (this would take us right back to #1. her weight.)
Of course I did not say this out loud. But I thought it. I thought it so hard that the thoughts drained right from my head (which did not want to think them) and wriggled out through my body.
Squirm.
Wriggle.
Shudder.
And I didn't let my head think about the question again. But God did not forget the question. And He seems to want to answer it. Persistantly so.Like a woodsman leaving objects along the trail for a lost companion-- torn shirt sleeves, bread crumbs, forked branches sticking up from the forest floor -- He may have succeeded in leading me in the right direction.

trail marker #1: a picture drawn by a three-year-old

And not just any three-year-old; my three-year-old. The same boy I was telling that Jesus loves him. And it only took me 11 years to look at the picture with truth goggles. Also grace ones.

So I'm packing my whole house to move in a little over two weeks. I begin in the upstairs crawl space. It must be that I had chosen this space to pack away my mommy-ness once all my kids started going to real school. I had forgotten about this storage area. It is stuffed with all the good mommy ideas I'd ever had (some clearly attempted more successfully than others)What little wisdom I've gained over the past five+ years allowed me to reduce the boxes down from six overflowing with educational games, flash cards, family magazines, file folders stuffed with kid recipes and birthday party ideas down to two. Included in one of the keeper boxes is the notebooks I kept for my sons' early learning-at-home years. (I hope to discover my daughters' somewhere still...oh, dear!)

Alexander, age 3; subdivided under the category "Bible" (having four kids in six years drove me to a desperate need for sub-categories in my life!)

And then a couple pages later, in our discussion of the Ten Commandments, Alex showed his child faith by drawing a perfectly silly picture under the very serious heading "Love the Lord God and don't put any gods before Him". (remember. 6 years divided by 4 babies = slightly uptight new mother.)

Alex' picture? Like any three-year-old's etchings. A large, bulbous, semi-round crayon marking signifying a head with three smaller bulbous, semi-round crayon markings signifying eyes and a nose. An upturned hash mark signifying a smile. Two hash marks out of the side of the head-blob signifying arms. Two hash marks five times longer than than the arm sticks jutting straight from the bottom of the head-blob signifying legs (three-year-olds have no time for minor body parts such as necks and body trunks -- can the stick figure smile? Walk? Grab things? Fine.)

In Alex' picture this is God. I can tell because it takes up almost all of the space on the white page. Balancing on top of one of God's stick-arms is another ,smaller-yet-equally-bulbous head with two leg-sticks standing straight up in the air.

The title: "Alex standing on his head on God's arm - showing that he loves God." (who needs other small-g-gods when this God lets you stand on your head on his great big stick-arm??)

I've been re-reading Abba's Child by Brennan Manning. Without realizing it at the time, I bookmarked it and hid it under my stack of more sophisticated titles. I didn't take the time to analyze this decision, but I'm beginning to think it was because it was annoying me. Also really pissing me off.

I mean really annoying stuff, like this statement: "When we accept the truth of what we really are and surrender it to Jesus Christ, we are enveloped in peace, whether or not we feel ourselves to be at peace. By that I mean the peace that passes understanding is not a subjective sensation of peace; if we are in Christ, we are in peace even when we feel no peace.

With a graciousness and an understanding of human weakness that only God can exhibit, Jesus liberates us from alienation and self-condemnation and offers each of us a new possibility. He is the Savior who saves us from ourselves. His Word is freedom. The Master says to us: Burn the old tapes spinning 'round your head that bind you up and lock you into a self-centered stereo-type. Listen to the new song of salvation written for those who know that they are poor. Let go of your fear of the Father and your dislike of yourself."

And this one. "The ordinary self is the extraordinary self - the inconspicuous nobody who shivers in the cold of winter and sweats in the heat of summer, who wakes up unreconciled to the new day, who sits before a stack of pancakes, weaves through traffic, bangs around in the basement, shops in the supermarket, pulls weeds and rakes up the leaves, makes love and snowballs, flies kites and listens to the sound of rain on the roof.

While the imposter draws his identity from past achievements and the adulation of others, the true self claimes identity in its belovedness. We encounter God in the ordinariness of life: not in the search for spiritual highs and extraordinary, mystical experiences but in our simple presence in life."

Here Manning quotes Mike Yaconelli, "I knew I was broken. I knew I was a sinner. I knew I continually disappointed God, but I could never accept that part of me. It was a part of me that embarrassed me. I continually felt the need to apologize, to run from my weaknesses, to deny who I was and concentrate on what I should be. I was broken, yes, but I was continually trying never to be broken again - or at least to get to the place where I was very seldom broken..."

Manning again, "At every moment of our existence God offers us this good news. Sadly, many of us continue to cultivate such an artificial identity that the liberating truth of our belovedness fails to break through. So we become grim, fearful, and legalistic. We hide our pettiness and wallow in guilt. We huff and puff to impress God, scramble for brownie points, thrash about trying to fix ourselves, and live the gospel in such a joyless fashion that it has little appeal to nominal Christians and unbelievers searching for truth.

From hound-dog disciples and sour-faced saints, spare us, oh Lord! Frederick Buechner wrote, "Repent and believe in the gospel, Jesus says. Turn around and believe that the good news that we are loved is better than we ever dared hope, and that to believe in that good news, to live out of it and toward it, to be in love with that good news, is of all glad things in this world the gladdest thing of all. Amen, and come, Lord Jesus."

It could be because I've been sorting through so many boxes of my children's childhood that I'm weepy. Or the wicked sinus infection I've had all week (and companion assortment of cold-medicines) that I'm tired. Or the fact that I love to watch Ryan Gosling act that I'm vulnerable (as are so many of his characters).

After watching Half Nelson (starring Gosling) with Andrew last night I had the urge to stay up into the night watching Gosling in my guiltiest-of-all-chick-flick-pleasures, The Notebook. Brian stayed up through the entire thing with me. By the final aged-lovers death scene, I was doing that kind of embarrassing snotty sobbing that I so try to avoid in my life. Hot tears smushing over my nose and dribbled, salty, into my mouth. It was dark. I hoped Brian wouldn't notice and laugh at my girl-ness.

I didn't want to have to explain that it wasn't just all the gorgeous shots of the younger couple kissing and hugging and melodrama of the elderly couple dying in each other's arms arms that made me cry. (and goshdarnit, why shouldn't I cry at that?!?) No, it's more.

That's it. I may have found the shelter at the end of the trail. I'm sure I missed many other clues along the way, what with all my huffing and puffing and whining and complaining about the hardness of the search. So certain that the holiness I'm being called up into is from my own list of reasons-to-hate-myself that I am blind to the deeper, truer list of my Abba. Could it be that His trail of holiness leads to knowing and being known by Love?

I almost feel like standing on my head. Not yet, but soon.