a story of a dog 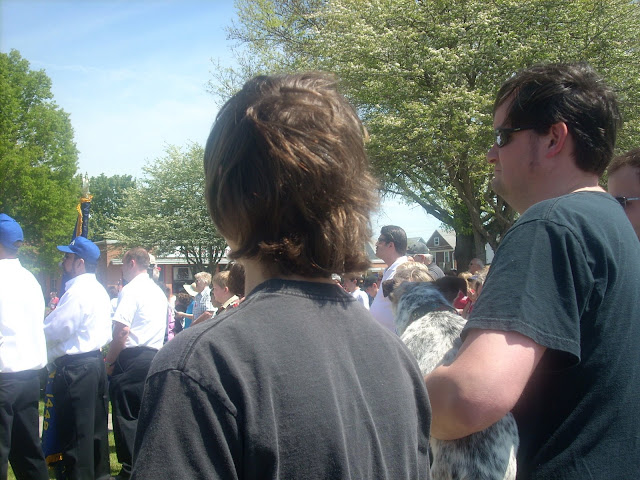 Brian holds Duchess at the Memorial day ceremony on our street.

There is another female in my husband's life.

He treats her like a queen. She competes for -- and often wins -- his attention away from me and our children.

The weird thing is that the kids and I love her, too.

She is Duchess the Jack Russell Terrier. In the two short years since we got her from a friend who found his life too busy for this needy lady, she has wagged and sniffed her way into the center of our family circle.

When floodwaters turned our backyard into an unintended island, she had only been with us for two weeks. When we closed her into our dry house, our hearts were heavier than the suitcases we were pulling up the street toward the highschool. When the state trooper met us at the stop sign we asked, "Please can't we take our dog with us? She's very small." (it's funny how we never even thought about Sonny the Gerbil. She was even smaller.)

So that is how it came to be that we carried Duchess across the football field, hunched between her and the whirring Chinook. She survived the evacuation with us and seemed to pretty much take all the commotion in stride.

With that crisis under our belt, we didn't think too much about the effect our move would have on this docile anomaly of a Jack Russell.

Granted the move included living on air mattresses for almost three weeks. She just jumped up onto them and rolled over for her belly rub. When we stayed overnight with friends between the final cleaning of our home and the closing for our new home, she was treated better by Nicki our hostess than we ever even came close to treating her. Whole pieces of bacon and fried chicken made it into the doggie bowl.

But when we finally made the move into the house on Jefferson Avenue our gentle little doggie seemed to display some new, nervous behaviors. Nothing too drastic, mind you. She just seemed out of sorts. Like us, she spent her time intent on finding a comfortable place to curl up. In the midst of the two dozen people moving us in, I found her trying to dig down into a pile of blankets and sheets, and then again in a pile of towels and pillows. She just couldn't get settled.

When we let her out into our new backyard she was too busy sniffing the air, ears perked and tail taught, to settle down enough to do her business.

We were all adjusting to this new life. We were city people now. Well, almost city. As city as you can get around these parts. It seemed to suit the kids fine. It definately suited Brian and me just fine.

But Duchess? That was still to be determined.

I thought we were making progress when, on the second day of our new lives, we took her for a walk. Once we hit the sidewalk, she seemed to relax on her red leash and to carry herself as she always did on our suburban neighborhood walks. I mean, here we have wide sidewalks, parking meters and so many more delicious smells. Back in Conklin, you walk one block you see it all. Rows of ranch houses with well-manicured lawns and minivans in the driveways. Here, you walk one block you have a Greek diner -- way more interesting to those delicate doggie nostrils.

So on that first walk, I thought we had it made. I even began to notice that Duchess was our ticket into the city. She was our icebreaker into conversation with the vast array of people who crossed our path. Back in Conklin, you walk one block you pass retired citizens with their well-groomed poodle and young moms with their deluxe strollers and chocolate labs. If you stop to chat, conversation takes a polite and predictable course. The weather, the price of gas and the comparitive size of the dogs pulling at their leashes toward each other.

On our first walk with Duchess we met a middle-aged woman with lovely, long hair and a once-pretty face.
"Does she bite?" She asked this as we waited together for the light to change. Our well-mannered ice breaker stood calmly as if waiting to be petted by this new neighbor. The woman's long, wavy hair fell over her shoulders as she knelt to pat the speckled, receptive head.

Her eyes do not move from the black and white softness of Dutchie's ears. I am busy drawing a mental picture of this woman's home filled with noisy, affectionate creatures and wonder if they help fill the space that is left vacant of a noisy, affectionate man.

It's a long light.

As I smile toward the woman I notice her gaze shift over my shoulder. She stood quickly and without checking the light waved toward us while stepping into the crosswalk. I looked back over my shoulder to see what motivated her to leave the curb so abruptly.

He was staggering toward Duchess. And mumbling.

If he asked anything regarding the safety of our dog, I could not tell. He just leaned over the yielding doggie head. She had not moved from her last position. Just the person patting her had changed.

Drool dripped from his unfastened lips. Some landed on Dutchy's black nose. Some splattered onto the sidewalk.

Back in Conklin no one mumbles. Conversation is always predictable. And articulate.

Holding the leash in one hand, I reach the other hand toward Brian and manage to grasp his three middle fingers. And squeeze.

With some effort the man petting Duchess stood to full height. Next to me now. He was slurring on about something. He seemed to be bragging.

An inner, inaudible sense directed my attention toward his face. "Tam, look him in the eye. Notice him. I am here in this exchange." Had it been my child he was admiring I am not sure I would have obeyed that voice.

The light changed. Brian pulled me by my fingers. The leash tightened as Duchess followed his footsteps over the curb.

He followed us across the street. Stumbling and muttering. "...a $300 coat from Wilson's....giving it to that waitress." We nodded and politely acknowledged him over our shoulders as he careened toward the convenience store on the opposite corner. We headed down Lincoln. I could see an elderly man manicuring his lawn about a half a block up. And a mom calling her sons toward an SUV. I exhaled some relief. Something familiar.

Back in Conklin, all the slurring and stumbling is kept on the backyard patios and at the corner bar and grill. It never meanders into the street. Never.

That year of the flood one of the well-manicured ranch houses neatly contained the murder-suicide of a retired couple. And we talked about it articulately in small huddles around our dogs and strollers. No one ever mumbled.

Turning from Lincoln back onto Jefferson, Duchess traipsed through the middle of a group of teenagers. They were speaking an Asian language. Chinese maybe? Perhaps Laosian? We smiled at them as we passed. They looked up from their clasped hands and cell phone conversations and smiled back.

We are not in Conklin any more.

While unleashing Duchess and leading her toward her water bowl, I joked with Brian that Duchess was our missional doggie. Maybe her Creator purposed her for this move, and for this strange turn of events in our family's life that led us from the world of deluxe strollers and basketball hoops and minivans to diners and drunks.

And it was this very thought that bothered me the next night when we lost Duchess. Bothered is not the right word. It was more like tormented.

We'd enjoyed a marvelous city kind of day, what with the Memorial Day parade two streets away and the barbecue in our tree-filled backyard. (Back in Conklin, efficient house owners cut down most of the trees that mess up their trimmed and lush lawns)

We had laughed at the dog's begging antics during our barbecue and subsequent chocolate-chip cookie eating. She had seemed pretty tired after her first parade and 21-gun salute at the memorial park on the end of our street. We assumed she had finally found a pile of sheets or stack of flattened cardboard in some corner and curled up for a nap, finally content in her new surroundings.

Around 9:00, as Brian made his way through his checklist of shutting up the unfamiliar house for the night the call came out, "Anyone seen the dog?"