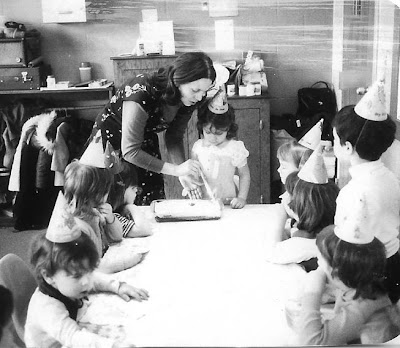 (March 9, 1976 - my fifth birthday party;
Mom makes a Little Bo Peep cake and throws a party with my preschool class)
Addiction is not too strong a word. In fact, it may be too weak. Disorder?
I mean I want to walk away, and I make plans to walk away. But I keep coming back.

My earliest memories of family and home trigger relapse. Those who were supposed to love me best allowed this to go on right under their noses – and did nothing to stop it. Nothing, at all. In fact, in fact – they encouraged the behavior and modeled the behavior and enabled the behavior. What did they think they were doing setting me up for this kind of misery? In what universe is this considered love?

Really, my mother was the worst offender. She is the one who wrote small plays for the neighborhood children. She is the one who talked the mothers into letting their offspring be exposed to this malice…all gathering around the porch swing with scripts and construction paper props in hand. She is also the one who gave the starring role of the yellow, yarn-haired princess to the neighbor girl and not me, but that’s another story I guess.

And it wasn’t just home. No place was safe. Not school where she had the audacity to come into my classroom and let us co-author and illustrate and market a book. Not church where she wrote one play after another for us to perform complete with multiple showings and rented stages and devious villains and bubbly heroines. (Come to think of it, I didn’t get the role of heroine those times either.) Not family reunions or holiday get togethers where we were encouraged -- er, forced -- to perform dramatic recitations of short stories and poems. And where we played one after another of her endless supply of created games. Her need to stir up this dangerous, messy, time-wasting creativity in everyone she came in contact with has severely damaged any hope I’ve ever had at living with any sort of normality – ever.

I mean I’ve tried, really I have. But I’m beginning to think it’s no use.

At 7 I was writing short stories. At 8,9,10 and 11 I was endlessly planning circuses and plays and musicals with a gaggle of reluctant, but submissive cousins. Well, all except that one stubborn cousin who got stage fright in the middle of our musical reenactment of Bullfrogs and Butterflies. She was supposed to be a snail and crawl from my grandma’s kitchen into the living room while all the aunts and uncles and remaining cousins looked on. It was my first experience working with touchy artists. It was crushing. The whole show had to stop and I shrank back into the corner behind my grandma’s recliner while the starlet’s father soothed her tears in the kitchen. Horrified is probably not too strong a word for how I felt.

And then? Well, then I entered my teenage years. And I really, really tried to break away from this dysfunction. I tried to blend in. I wrote some angsty, melodramatic short stories that still won awards (What were those judges thinking? Ugh!) I auditioned for my highschool’s annual theatre productions. (This is another long story, but it’s worth mentioning I didn’t get the heroine role then either. Hmmmm….there seems to be some sort of pattern here.) Then I married and had children and the most creative energy I could muster for, oh about, a dozen years was an occasional themed birthday party and letters I’d write to my children in their scrapbooks.

About five years ago, though, all hell broke loose. The need for a major creative fix that was lying dormant underneath so many self-imposed layers of self-consciousness, self-loathing, and self-protection kind of sprang up and demanded attention. Talk about your jonesin’. I had it bad.

And it was all resurrected with a bunch of kids singing and dancing on a stage. At a church. In Chicago. It was the opening performance of a multi-day arts conference. I wasn’t even sure why I was there. The song wasn’t even into its second chorus before I was slumped over in my chair, high up in the mega-church balcony, bawling like…well, like a jilted theatre starlet. This need to create and to be creative and to collaborate with other creatives was awakened and I fell off the wagon. Hard.

And like any dependent junkie running back into the arms of their dealer, I ran to the nearest phone. Mom, I am so sorry. I’m so sorry that I’ve resented your creativity and tried to shut it down in myself. Thank you for everything you did all those years.

I manage to keep the habit at bay still to this day. Only letting it creep into certain portions of my life, in front of certain types of people. The rest of the time I talk about the weather and the price of gas and play online word games. And feel miserable about myself.

When does it become okay to just admit it already? I'm a complex, sensitive, non-linear creative. And my drug of choice? The creative process. It literally makes me crazy I love it so much. To watch the formation of a vague, nagging idea grow and take shape, passing from hand to hand of one skilled craftsman after another until it is brought into full, dazzling light to be savored and shared by a group of people. Well, it's done me in.

Might as well throw me off the wagon and run me over with it.

Sorry, kids. Don't blame me; it's all your grandmother's fault. 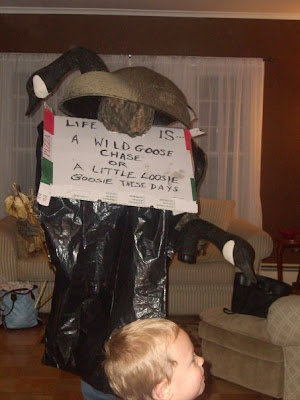 (For the sake of justice, I need to mention my own dad as a partner in crime. This is his -- ummm, unique-- Halloween costume from this year's get together at our house.)
at 7:59 AM