"Now usually, I would let you post what you want (within reason) in the comments. But you should know that anything that justifies the treatment of this child will be deleted without response. I am not entertaining debates on this one. You will respect the body of this little girl or you will have to go converse elsewhere with someone else. I can't protect her safety in real life, but I will protect it here."

I watched this video on my small phone screen without sound during a layover in the Detroit airport.  Somehow without sound made the whole thing more clear and disturbing.  The physicality of that officer, those kids, the bystanders shout louder than whatever audio I was missing.  I tried to imagine my own body in the chaos.  I hope I would have at the very least sat down on the ground next to one of those kids until their own momma showed up.  I will pray that to be true of my heart. (hat tip to my friend Krista)


| 2 | Is Anglicanism Catholic or Reformed? at Anglican Pastor


"Most American evangelicals experience a church world that is either protestant/reformed or catholic. You have to be one or the other. For many ‘catholic’ means “Roman Catholic”; ‘reformed’ means “calvinist”; ‘Protestant’ means “Not Roman Catholic.” The Orthodox churches are kind of silently off to the side in most of these schemes. Anglicanism, however, had a unique history that wreaks havoc on these neat labelling systems."

I found this brief overview of the relationship Anglicanism has with both Roman Catholicism and Reformed traditions. When I shared the link on Facebook my Roman Catholic friend (rightly) pointed out the absence of King Henry VIII's role in the birth of Anglicanism.  You can read our exchange here.  My friend also mentions several other complicated characteristics of the Anglican communion which we refer to with phrases like "big tent" "via media" and "two integrities".  I've been contemplating adding a few more posts to my On Becoming Anglican series as we draw nearer to Brian's ordination and, perhaps, these idioms will show up here again.

It's wedding season around here for several family and dear friends AND for our son and future daughter-in-law.  This series of posts is full of reasonable and meaningful advice for everyone involved in celebrating a new marriage.  A couple favorites so far:  Timeline of the Indispensable Bridesmaid & How to Get the Wedding Reception You Really Want .

Just because these truly are perfectly timed and quite hilarious.  And here's a picture of our scaredy-dog Leopold McGarry, or Leo on most days.  Bonus points to you if you can tell me what character he's named after! (hat tip to my friend Margaret) 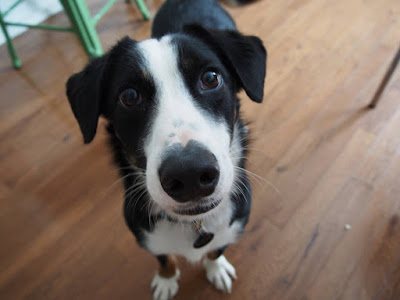 
"So, my poetry discipline? Listening, paying attention, getting an arriving poem or image into my journal and onto my computer screen—that’s my discipline. It’s never work. It’s pure delight! I read voraciously and often a word jumps off the page at me, demanding to be used. I’ve written four new poems this week just by catching some images mid-flight and finding the words to fulfill the image, which takes off in unexpected directions. What I write writes me. I scan the morning paper forAssociated Press headlines that ask to be poems—“Comeback for snowy plover.” “New sea star babies offer hope amid mass die-offs.”


If you've visited here much in 9 years I've been blogging you probably figured out I have a poet crush on Luci Shaw.  This interview by Angela Doll Carson captures Ms. Shaw's spirit quite nicely.  I felt like I was visiting with an old friend.

Allison Backous Troy's insightful review of Nancy Nordenson's Finding Livelihood is the sort of review that makes me want to re-read the book I already enjoyed once.  This is a good review on a subject so familiar to so many of us that I think we forget to hold it up under the light of truth and grace.

Here's my summary of Nordenson's book:  5 Favorite Reads in May


| 7 | Joy Williams on The Civil Wars and Her New Album, VENUS at Medium


"How would you describe VENUS? For me, it’s my coming-of-age album, becoming the woman I’ve always wanted to be. I think over the course of the last couple of years making this album, I finally felt that I stepped into my own skin. I’ve spent my whole life trying to be the best version of myself, and I’ve finally let myself just be me."

Such a good interview. I can't stop listening to the singles released from this album. And, you guys, have you LISTENED to this song?  This is the best definition of "woman" I've ever heard.  Yes, yes, yes.