Art House America produces one of my all-time favorite blogs.  I admire the founders, I follow the contributors and I embrace the topics of conversation.  What a joy for me, then, to be able to add to the conversation with this essay last week.

If you've followed my blog for a while, the post might sound familiar, but this is the new and improved version thanks to the feedback of a band of writer friends (and to Central Market's pinot grigio and sweet potato fries which we all shared ravenously, editing pens in hand to edit out extra words like "ravenously").

My friend, Katie, asked me "Have you considered that Wendell Berry might actually read this?"  Well, we all laughed at the image of Mr. Berry checking his blog reader, and then considered he might actually have some friend or intern who does that for him.  So, Mr. Berry, if you do happen to read this, I would be honored, sir.


"When I read Wendell Berry's poems, I find it easy to believe that he and I share a kindred spirit. I too care about resurrection and preserving the good and true and beautiful in a hell-bent civilization. But when I read Berry's fiction, I begin to suspect he would not much approve of me. As I read, I find myself constantly refuting, "Yeah, but . . .” to the author's scrupulous definition of the good life and general dismissal of anyone who'd wander off the narrow path. I can be contrarian too, Mr. Berry.

I read about the Coulters, the Proudfoots, the Branches, and Mr. Crow as if I know them personally, and I find them to be not representing themselves altogether truthfully. Both sides of my family going back several generations come from Port William-type villages in New York state. As I’ve matured, I've begun to blend the good with the bad in that heritage — the almost visceral knowing of the beauty of a creek bed, for example. When Mr. Crow moves to his final home, living out the rest of his life on a riverbank, I feel like he's speaking my family dialect. I know exactly the "substantial sound" of a boat line plunking into the wooden bottom and echoing across a quiet morning. I comprehend the language of a single fish slurping from the surface of still water. I know it because, by the grace of God and kindly grandparents, I've spent countless childhood days on a quiet waterfront. But I also think I know it because it's buried in my genes from generations before me.

My earliest memory involves a cow pasture, a barbed wire fence, a lazy brook, a picnic lunch, and a homemade fishing pole. This was the location for my first caught fish, I’m told. I’m pretty sure it was my first and only. The pasture and the brook ran the edge of my great-grandfather's family town. He spent many early days wandering in that place, and — in some mysterious way — passed that knowing down to my generation.

In the quiet moments with Wendell Berry's farmers and town folk, I imagine myself accepted as one of them. I've known them — in my own family tree, in the contrarian churchgoers my father, a pastor, attracted for most of my childhood, and in the lives of my best friends still sharing family land with several generations of kinfolk.

Other moments I am angry. Mr. Berry's body of work lauds the unadulterated; how does he reconcile glossing over (or at least hiding from view) the ugly dysfunctions that prosper alongside the natural beauty of such villages and pasturelands? I've seen firsthand not only the ornery nature of such characters — wishing to deny, for example, a decent salary to their pastor who does not make a living with his hands — but also the ingrown, incestuous thinking that tends to breed in rural places. Eventually, my paternal great-grandfather brought his family to town, and he drank away the family income. I guess Mr. Berry might argue that moving into town, working for the man across the desk rather than staying close to the family land, they introduced their own demise.

I'd ask: What were they running from?" 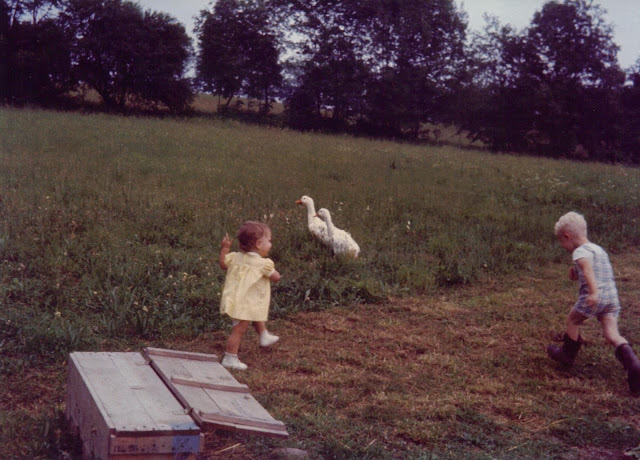 Chasing geese with my cousin on my uncle's farm in the rural Northeast, circa 1972?