Why we give new names to our kids on their 21st birthdays (also, Happy 22nd Birthday, Alexander!)

Shortly before our oldest son turned 21, we considered a way to celebrate the rite of passage this particular age represents in our culture. We considered all the ways that we, his parents, had grown and changed within his lifetime. (Since we were basically children ourselves when he was born, there was a significant amount of learning to be done!)

One especially important realization was that we'd wished we had an opportunity to name our children in the custom of those in the Roman Catholic church, upon a child's confirmation. The years had helped us recognize how much we relied on our relationship with the Church across space and time to help us parent -- the community we worship with each week and the legacy of the Christians who have come before us.

We wanted very much to hand our children that truth in the sort of way that it would become attached to them forever and ever, amen.

With Andrew, we chose the name Patrick - making him Andrew Brian Patrick Murphy. We hoped to reflect the Irish heritage on both sides of our family, as well as affirm the deeply-formed qualities of humility, courage, mercy and integrity embodied in both the saint and in our son during our 21 years of knowing him. (We couldn't have known that we'd also given him great material for future stand-up jokes in which he likens his name to four Irish guys getting thrown out of a pub. Well, we do what we can.)

Last year, our second son, Alex, turned 21. We'd spent the previous year considering the perfect name to gift him. We invited input from others who knew and loved him. When we finally decided, we recognized that the totality of his name was rather weighty, and yet barely sufficient for what we wanted to affirm: a love and aptitude for music, theology, justice and the Church.


There are many saints named Gregory, and we're pointing Alex toward the life of Pope Saint Gregory I. I've included some of his biography in the next section, but want to share a story, first, of another saint who inspires this name.

Seymour and May Gregory were a childless couple who lived in a poor, rural area in New York's upstate farmland. Seymour drove a milk truck and May cared for their small farm. My great-grandfather (Alex's great-great) met them as a travelling tax collector. Somehow -- we're not really sure how the decision was made -- my great-grandfather asked this kind couple if they would allow his daughter -- my grandmother -- to live with them.

The backstory to this request is that my great-grandmother died of scarlet fever by the time my grandmother was two years old. My grandmother lived with her widowed father and older sister, Helen, for a few of her childhood years until my great-grandfather remarried. Unfortunately, his new wife fit the role of the unloving step-mother stereotype and (we assume) forced her husband to make a decision between her and his two daughters.

And, so it was that Seymour and May Gregory became my grandmother's new guardians. (Tragically, Seymour died shortly after this time when his milk truck was hit by a train.)  May Gregory and my grandmother lived a hardscrabble life keeping the farm and a whole assortment of odd jobs in order to make a living.

I'll never forget my grandmother's 80th birthday when her daughters (my mother, Alex's grandmother) asked Grandma to tell us the story again. We waited for her to show even the tiniest bit of sadness or anger. As an adult now, I realize that there must have been both sadness and anger, but I also believe my Grandma when she told us this story was actually happy because it was Grandma Gregory who introduced her to Jesus. In that care for an unwanted child and in that sacrificial love, the Gregorys changed the entire course of our family history.

Grandma Gregory lived a long, dear life. She continued always to provide nurture and support to my grandmother and my mother -- especially after my grandfather (my mother's father) died young leaving my grandmother alone to raise 5 girls all by herself in yet another poor, rural town in upstate New York.

For much of my growing-up years, I did not understand the weight of glory held in this family story. It had become too familiar to me. I want to change that for my children. Gregory is a name we never want to forget. 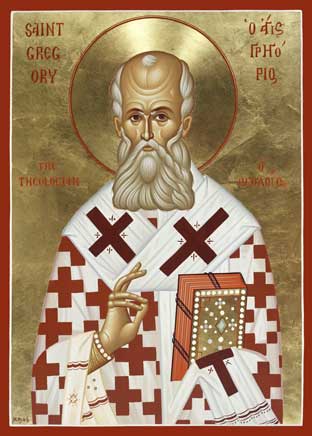 Pope Saint Gregory I: You can read the Wikipedia summary here (I'm also paraphrasing from other sources).

Saint Gregory came from a wealthy family, but as a young man sold his estates and founded seven monasteries. A few years later, Pope Benedict I ordained Gregory a deacon of Rome, and sent him to Constantinople as ambassador. (A footnote: Alex has developed a love for Turkey after studying there last spring).

Gregory was reluctant to take the office of Pope, but became so influential he became one of only 2 popes known as "the Great". He is also one of the "Four Latin Doctors" of the Church -- sending his friend and fellow monk, Augustine, on mission to the British Isles, directly influencing the birth of Western Christianity on a continent full of warring nations and pagan religions.

Gregory the Great is considered a saint in the Catholic Church, Eastern Orthodox Church, Anglican Communion, and some Lutheran churches.The Protestant reformer John Calvin admired Gregory and declared in his Institutes that Gregory was the "last good pope". Throughout the Middle Ages he was known as “the Father of Christian Worship” because of his exceptional efforts in revising the Roman worship of his day, including the form of plainsong which simplified and codified music, now known as "Gregorian chant". This music-loving pope influenced Western worship. He is the patron saint of musicians, singers, students, and teachers.

For all of these reasons (and no belief that Grandma Gregory, Pope Gregory or Alexander Morgan Gregory are without brokenness and flaws), we've chosen to give the name Gregory to our son Alex on his 21st birthday.


Collect for Feast of Saint Gregory:


Almighty and merciful God, you raised up Gregory of Rome to be a servant of the servants of God, and inspired him to send missionaries to preach the Gospel to the English people: Preserve in your Church the catholic and apostolic faith they taught, that your people, being fruitful in every good work, may receive the crown of glory that never fades away; through Jesus Christ our Lord, who lives and reigns with you and the Holy Spirit, one God, for ever and ever. Amen. 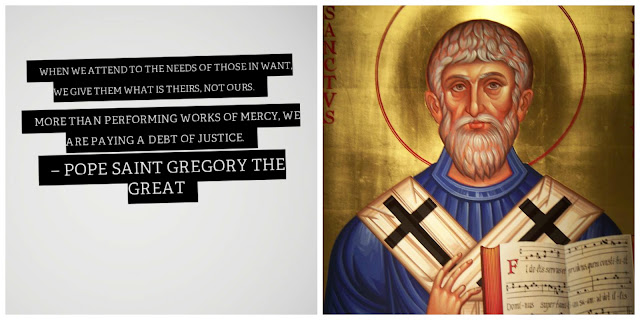 The Feast of Gregory the Great:

"Hovhaness: Prayer Of St. Gregory For Trumpet & Organ, Op.62b (Reduction By The Composer)*" by Wynton Marsalis


As is my nature, I felt the need to mark the occasion his 22nd birthday with a photo slideshow of Alex through the years.  For the soundtrack I chose a song that I believe Alex himself sings better than any of the recordings I could find.  Jason Mraz and Willie Nelson and Kermit the Frog are all OK, but Alex and his banjo really do it best.  This will have to do, I guess.