*note: this is my first attempt to share notes from the plenary sessions of the Transforming Culture Symposium I attended in Austin back in April. I did my best to make pronouns and all other various grammar siblings cooperate, but I know I've missed a lot of stuff. Everything written should be assumed as the speaker's material, except where specifically noted as my own opinion. Also, even if you don't typically read this long of a post, you should know that the notes from this symposium represent thoughts and ideas and concepts and truths that have been boring their way deep into my soul and just plain old messing with my head. So, if you are someone who is either a Christian, or an artist, or just my friend, I'd love to share that with you. And, because I'm not above bribery, I'll select one person randomly from each post in this series to get something fun and nifty and super-cool for free from me!
Here we go... 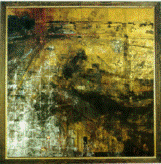 The Question:
In what way is art a gift, a calling, and an obedience?
In what way, that is, does art tell us about the nature of God (that everything is gift), the nature of human beings (that we are made in the image of a Gift-giver), and the nature of earth-tilling and Gospel-living (that we are responsible servants who have been commissioned to make artistic culture in the context of a fallen world)?


The Goal:
Our desire here is to help pastors understand the relation of art to God, to ourselves as humans, and to our calling as culture-makers, filling the earth with artistic goodness one square inch at a time. This talk is foundational in nature and will be presupposed by the later talks.

When the LORD God made the earth and the heavens- 5 and no shrub of the field had yet appeared on the earth and no plant of the field had yet sprung up, for the LORD God had not sent rain on the earth and there was no man to work the ground, 6 but streams came up from the earth and watered the whole surface of the ground- 7 the LORD God formed the man from the dust of the ground and breathed into his nostrils the breath of life, and the man became a living being.
8 Now the LORD God had planted a garden in the east, in Eden; and there he put the man he had formed. 9 And the LORD God made all kinds of trees grow out of the ground—trees that were pleasing to the eye and good for food. In the middle of the garden were the tree of life and the tree of the knowledge of good and evil.
10 A river watering the garden flowed from Eden; from there it was separated into four headwaters. 11 The name of the first is the Pishon; it winds through the entire land of Havilah, where there is gold. 12 (The gold of that land is good; aromatic resin and onyx are also there.) 13 The name of the second river is the Gihon; it winds through the entire land of Cush. 14 The name of the third river is the Tigris; it runs along the east side of Asshur. And the fourth river is the Euphrates.
15 The LORD God took the man and put him in the Garden of Eden to work it and take care of it. 16 And the LORD God commanded the man, "You are free to eat from any tree in the garden; 17 but you must not eat from the tree of the knowledge of good and evil, for when you eat of it you will surely die."

The Talk (in summary) :
1. A Defintion of Culture:
“Culture is what we make of the world in both senses.” (from Christian cultural critic Ken Meyers and summarized by Crouch)
What does that mean?

Culture is always a material, rather than immaterial (eg. The realm of values and ideas).
Sensory, tactile, tangible.

2. Four Observations About Culture from Genesis 2 :


Observation #1:
Lord God Himself is a culture maker in Genesis 2. In Genesis 1, He created ex nihilo (from nothing), but in Genesis 2, He creatio ex creatis - created from creation.


Culture is God’s gift to Adam. Without culture (a garden) how could Adam have survived in the wildness of even this good world? God begins the work of culture before he gives the work to Adam. Culture is as much God’s gift as nature.


Everything Adam does begins with what God did.


Observation #2:
“Out of the Garden, the Lord God made to grow every tree that is pleasant to the sight and good for food”


This garden is not just utilitarian source of nourishment. It is also a place of beauty. The trees are not just good for something. They are good for beholding. They are beautiful.


“River…where there is gold and the gold of that land is good….”Why does the author include this? Is it a treasure map? What is the point of the list of precious natural resources? The text does not tell us about primarily useful minerals. The text does not say the river has good iron, granite and boxite. The only value of these resources is their beauty. Of additional note, the minerals named in the text are only available when they are discovered and cultivated. Crouch credited Makoto Fujimura with the observation that these substances are hidden, latent, lying below the surface of the good world.

The world is even better than it appears.

[Note: the remaining points from Andy Crouch's talk as well as his concluding call to action will be available in the book being edited by David Taylor and published by Baker Books.]

Tamara's Thoughts :
It is not my intent to critique the presentation of this content, but to just respond to it from my limited understanding and experience. It's actually quite humbling to even add anything of my own.

I had never, ever heard the creatio ex creatis as modelled in Genesis 2. I guess, in the few amounts of minutes that I've ever dedicated to even analyzing the source of culture, I was of the opinion that culture, itself, was man's choice. The same kind of choice as man made to eat the forbidden fruit. I had never, ever understood culture as part of God's creation gift. Mostly, though, I had just not spent much time thinking about it at all. Shame on me.

For sure, mixed in with that mental laziness was a belief I had picked up along the way in my journey that culture = "them that give us cooties if we get too close". If, instead, culture is part of God's creative gift it is also part of His creative directive. He desires, even commands, that we make stuff and meaning out of the raw material He has given us. I knew this, but I didn't. Know what I mean?

As someone who participates in the weekly planning of church services, I think we could probably spend a whole year of Sundays just telling God how sorry we are for holding this gift with so much contempt and laziness and apathy. We should not take his abundance of mercy toward us as a sign of his approval. The very fact that an increasing number of Christians are doing the hard work of their craft and drawing our attention to that which is beautiful again is a sign of God's sheer mercy.

In no way do I make that last statement out of a sense of condemnation (which would not be from God), but out of a true, overwhelming grief. In some ways I think we are generations and generations behind those who have taken the reigns we dropped and have takent on the responsibility of forming culture(there's a whole conversation I'd love to have here about chasing trends and wonder if the Church gave up art and beauty to chase the tail of Reason...did it really need to be an all or nothing?). In many ways, it is my opinion that we need to humble ourselves enough to learn from them. Instead, it seems that much of the Christian subculture creates out of a sense of superiority. That somehow we "own" the Spirit and therefore do not have to work at our craft, to play and to learn from deep bouts of pain. And here's a clue in case you hadn't noticed - it shows. Our work, as a whole, is not pleasing to the eye, not beautiful.

I remember having a very clear thought about this last fall. I was standing behind a table in our main hallway at church promoting an art show. The goal was to discover artists in our church family who may be hiding their talent or just unaware that we cared about their talent. I had made a pretty passionate announcement during a service and was hoping for at least a small line of people at the table. Next to our table was the sign-up table for an event called Secret-Keeper Girls. It's a great event that promotes modesty and an understanding of true beauty for our daughters. That table was swamped.

Now I'm not knocking that event or that organization. My daughters and I attended it one year and have had amazing conversations as a result. But the sheer contrast of numbers -- the hundreds of people who signed up for that event versus the small handful who signed up for the art show made me wonder if we would even need to teach basic principles of beauty to our children if we had never stopped promoting and creating and enjoying it in our painting and writing and composing.

(and for a real hand grenade that I almost don't want to mention for fear that this minor point will overshadow the rest....I wonder, just wonder, how the culture's rampant addiction to pornography might be different had we not gotten so prude about the beautiful nude forms found in ancient painting and sculpture??)

I know there is so much more to say about this, and I hope some of it will show up in the next posts in this series. I look forward to hearing your responses.
at 8:08 AM