A vacation is what you take when you can no longer take what you've been taking. ~Earl Wilson

My family has a saying: I'm not complaining, just reporting. In that spirit I share a recent facebook status: Tamara Hill Murphy is bonafide, super-fried, dog-tired (and barely hanging on by her fingernails). Other than the few months after the birth of each of my children and the few months after our housefire, I'm not sure I've ever been this physically and mentally depleted. I am so tired that many days I feel physically sick from it. And that's nothing compared to how my husband is feeling. It's been a good but wearying 18 months or so.

But vacation is coming and I don't think I've ever been more excited for those three words to be true. Brian's actually started Thursday. Within 12 hours of his first day he literally fled the country with his buddy Scott. They're boating up the Rideau Canal waterway in Canada. We've been referring to this trip as Brian's Man-Cation. 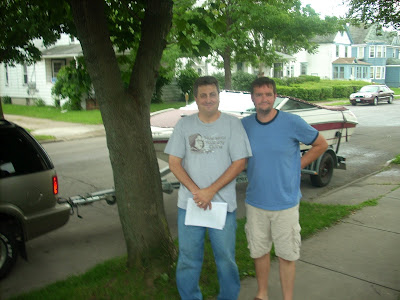 He's been planning the voyage for over a year now. Last year the mission had to be scrubbed because we had just moved and all his boat-trip money got sucked into orange and green and brown paint for our new walls. So for 18 months Brian has been dreaming and preparing. Sometimes I'll see some far-off look in his eyes and know that he's picturing himself navigating his beloved boat through some lock in the great North. Last week he spent a couple of days pulling apart his entire boat, washing, polishing, buffing, staining every nook and cranny. In the mid-afternoon I looked out the back screen door and couldn't see him anywhere. Then I realized he was laying down on the back seat of the boat staring up at the sky.

There have been many years in our past as husband and wife that I would have begrudged him this time away. It's sad, but true. But this time I couldn't wait for him to be able to go. For weeks I've been praying -- almost ferociously -- God would not allow anything to hinder Brian from this time away. This morning he called. He said that they had camped overnight in Chaffeys Locks and he spent the evening sipping whiskey and looking at the stars and listening to Scott strumming his guitar for two-and-a-half hours. This morning they had coffee and boating advice with a couple of Canadians across the dock. Today they hope to catch their dinner in fish.

So my vacation hasn't actually started yet, but part of me is at rest because Brian is boating in Canada. Deep exhale.

Actually, four of the six Murphy's dove headlong into vacation this weekend. Yesterday my two sons and three of their best buddies took off for NYC. The road trip celebrates Andrew's 18th birthday coming next week. (gulp!) 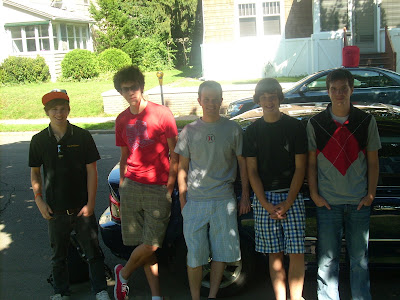 My brother Ryan is the trip-master. It's one of those benefits of the 13 years between us. He is closer in age to my kids than to me. Good friend in their eyes, trust-worthy chaperone in mine. They posted their trip itinerary -- under the heading NYC baby!!!!! :

Should be some interesting stories there. I'm looking forward especially to hearing how they make it through Mass in St. Patrick's. Jeremy's the only confirmed one in the bunch. Hopefully he'll be able to navigate the four Protestant boys through the service.

Kendra is the fourth Murphy to hit the vacation highways this weekend. She's headed to Keuka Lake with her bff/cousin, Megan. My brother and sister-in-law have a cottage on the lake and the girls have more traditions than the number of years they've been going. 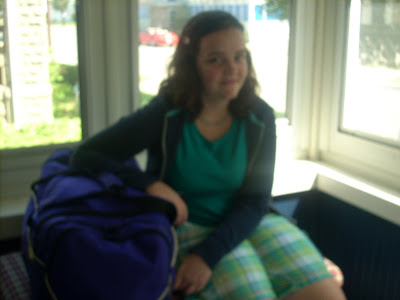 For weeks she's been carrying around a marbled composition notebook. I finally asked her what she was writing?

Here's a sample:
1. play cards
2. beat Yoshi's Island
3. Name the ducks/give them personality traits
4. Tube
5. Make dinner
6. Find out who is in the cottage next door (apparently last year this introduced a bonus feature to the lake week: a teenage boy)
7. Tan
8. Swim a buttload
9. Watch all three of the Bourne movies
10. Write down everything we did
11. Eat
12. Buy marbles at the flea market
13. Make a list of marriage requirements (read: potential-husband requirements)
14. Write down inside jokes
15. Take pictures
16. Make goals for the school year
17. Jump off the dock

I looked up from the paper in my hand and asked, What's a punch list?

She looked the look at me that infers duh! without her having to actually say it out of her mouth.

--It's a list of all the people we want to punch.

So my actual vacation doesn't start until Tuesday and for sure I plan to make a punch list of my own. It oughta be good and ready by then.
at 8:20 AM