7 Quick Takes: homemade pretzels, cascarones, my new life as a rabbit and more...

You know what I've said about me posting recipes here, right?  Still, every once in awhile, something needs to be said.  During Lent, when I wasn't blogging we made an attempt at homemade pretzels.


I got the recipe from A Continual Feast and mixed up the dough while friends visited one of the long days Brian was in Guatemala.  Traditionally (as early as the fifth century), the pretzel was eaten only during Lent. Each year on Ash Wednesday bakers started making them and each year on Good Friday stopped.  The early Christians fasted from all dairy products during Lent, making the simple ingredients of flour, salt and water a perfect Lenten substitute.


I wish I took a picture.  But I didn't.  You can look here from some online examples, though. (by the way, I don't know this good woman or her blog, but our pretzels turned out looking pretty  much identical!)

(from A Continual Feast by Evelyn Birge Vitz)

Coarse or kosher salt (we only had sea salt on  hand)

Add the sugar (or honey) to the water; sprinkle in the yeast and stir until dissolved.  Add 1 tsp salt. Blend in the flour, and knead the dough until smooth.

Cut the dough into pieces. Roll them into ropes and twist into pretzel shapes. You can make small pretzels with thin ropes, or large ones with fat ropes, but remember that to cook at the same rate, your pretzels need to be all the same size.

Bake at 425 degrees for 12 to 15 minutes, until the pretzels are golden brown.

*Natalie made a whole pan of cinnamon-sugar sprinkled pretzels  (brushing on melted butter instead of egg).  Everyone in the house NOT fasting from sugar loved her version too!

Thought you might enjoy one of my favorite photos Brian took during his week missions trip to Guatemala.  His stories are meaningful, joyful and somewhat difficult to hear.  Maybe I can convince him to write a guest post for us here?


In the meantime, a photo: 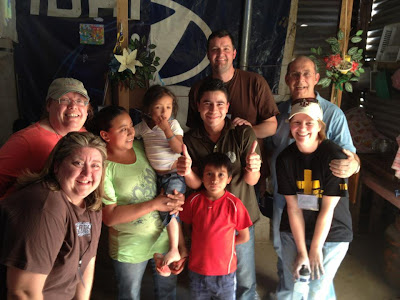 Here's our family Easter Sunday morning.  We are truly as happy to be related to each other as we look. 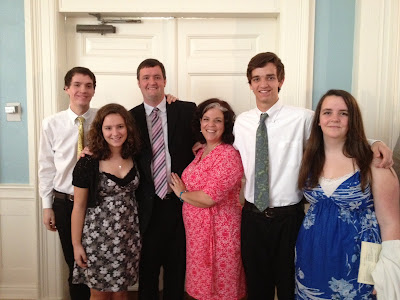 There were many lovely spots we could have chosen for our group pose, but I've learned it's better to just get a shot while we're all in one place!

When I was little, we spent every Easter Sunday with a big dinner after church at my Grandma's house.  Just like we spent Thanksgiving, Christmas, and every birthday for each of my 17 cousins.  As we've gotten older and don't gather that way anymore, we've had a hard time keeping up the big meal on Easter Sunday because so many of my family members are pastors/ministry leaders.  Everyone's too worn out to put out a spread for Easter Sunday lunch!


Now that we're in Austin, we were grateful for an invitation to a good, old-fashioned Easter Sunday feast with friends from Christ Church.

Also, while I wasn't blogging during Lent, I began working for TaskRabbit, a innovative social media-fueled -connecting site for people who do not have time to complete all the tasks on their to-do list to hire reliable, temporary help to complete their tasks.


It's been quite an interesting experience so far!  I could probably start running a weekly feature of all that I'm learning from putting myself out for hire to complete strangers.  It's been equal parts intriguing and humbling.


If you live in one of the TaskRabbit cities, though, you should definitely check it out!

By far, my favorite task I've taken on so far is a temporary gig as the 2012 campaign manager for the annual Couponing for Community campaign that my sister dreamed up three years ago.  In 2010, Kaley wanted to send a subversive message to the Extreme Couponing media blitz by initiating a grassroots effort among her fellow coupon bloggers and  her readers at Cha-Ching on a Shoestring  to unite their collective couponing powers for good.  Within three years, the response has been so strong, that we've set a goal ten times larger than the total donations in 2010 to 30,000 items donated to food pantries, shelters or friends in need during the week of May 6-12.

I'm going to encourage my readers to join in this year and will set up a dedicated post to the campaign in a couple of days.  In the meantime, head on over to the Couponing for Community facebook page and click "like" if you want to get connected!

Speaking of grassroots efforts, you really need to watch this story of Caine and his cardboard arcade.  The whole story is 100% awesome. (thanks to my nephew Zachary for sharing this!)

Hope that smile on your face from watching this ambitious micro-entrepreneur lasts all weekend long and is contagious to everyone you meet!