From the book pile

When's the last time I realized here what a babe I am in the woods of learning?  When I read back through old blog posts I see this lament being an unintended theme for the blog.  In this case, specifically, I'd never heard of William Zinsser before I saw an article of his posted by a friend to Facebook.  Here I've been telling people I'd love to be a writer of creative nonfiction and I've never even heard of the man who wrote the "classic guide to writing nonfiction".  And what a delightful read it was!

A sweet look at the friendship of women, specifically Luci Shaw and Madeleine L'Engle.  Reading back and forth -- each chapter from one or the other and a few written as actual transcribed conversations -- felt as if I were sitting at a meal with them, listening in and learning.  I'd pulled this book off the shelf to finally read because I was trying to write a poem for one of my own dear friends before she moves across the world.  I can only hope our journey together is as rich and long-lasting as Luci and Madeleine's.

21  Miss Pettrigrew Lives for A Day, written by Winifred Watson (Persephone Books; Revised edition, December 31, 2008. 256 pages)
This was just for fun.  And I saw the title in someone else's reading list but I made the mistake of forgetting which one.  And, it was fun.  But I confess I didn't finish the book.  I brought home the book and the film of the same title, starring Frances McDormand and Amy Adams on the same day and my daughters and I were looking for a movie to watch together and, well...

So may I suggest both the book and the film?  (what the film leaves out regarding cocaine it makes up for regarding rear-view nudity.  Just so you know.)

I first heard about Dreher's book linking through a series of articles a friend posted on Facebook:

The new anti-urban ideology of ruralism at The Week

All the Lonely People at The New York Times

After waiting several weeks for the book to get back to my library, I read it in one night.  Unfortunately, that same night happened to be following a CAT scan ordered by my doctor for an undiagnosed pain I've been experiencing.  I say "unfortunately" but my uncertainty helped me fully engage with the tragic ending of Ruthie Leming's too-short life.  In fact, she died at age 42.  I am 42.  Ruthie Leming comes from a small town.  I come from a small town.  Ruthie Leming never left home.

Well, that's where the similarity ends.  But I cried imagining the sort of people who live in a town small enough to pitch in for round the clock care for a mourning family.  Even more, and in a pleasant contrast to my complaints with some fictional characters dreamed up by the revered ruralist himself, Wendell Berry, Rod Dreher takes care to tell the good and the bad he sees growing up, leaving small town home and coming back again.  The book leaves us with more unanswered questions, most notably "Is it possible to go home again?"

For Dreher and his family -- immediate and extended -- I certainly hope so.

from Ekklesia Project's description:  "...Sidewalks in the Kingdom challenges Christians to gain a practical, informed vision for the city that includes a broad understanding of the needs and rewards of a vital urban community. Building on the principles of New Urbanism, Jacobsen emphasizes the need to preserve the nourishing characteristics of traditional city life, such as shared public spaces, mixed-use neighborhoods, a well-supported local economy, and aesthetic diversity and beauty."

During all the time I spent reading this book I couldn't tell if it was already outdated or not.  Especially after reading Rod Dreher's plea to return to our small town roots.  Then it dawned on me:  both perspectives -- New Urbanism and the new anti-urban ideology of ruralism are dreaming of the same end goal -- places stewarded at their best for the common good of its community.

Occasionally I got a tad bit annoyed with Jacobsen's use of Scripture for propositional arguments for city planning (e.g, a list of Bible verses that include the word "walk" to commend the practice of walking versus driving).  Mostly, though, I appreciated his gracious, intelligent and humble tone.  For the fact, alone, that he interviews and excerpts a book written by his own mayor in Missoula, Montana, he earned my trust.

Jacobsen also provided me with the best rationale yet for a renewed love for the urban without jettisoning the rural.  His point is that we can help a city prosper whether we live in it or live outside it, but work for it (eg., farmers in the rural space outside a city produce crops that feed the city).  In the author's argument, it's suburban living that is most problematic.  (I made the unfortunate choice to bring up this argument at a lovely brunch where I was a guest, not realizing what the other viewpoints might be about living in the suburbs.)


"An urban dweller supports the city by direct participation in its life and its rhythms. And a rural dweller supports the city by enjoying the culture that is produced in the city, by providing food and other resources for the city, and by being a careful steward of the wilderness that surrounds the city. What is most problematic with regard to the city is suburbanization which can drain the life out of the vital center of the city and doesn't support the city with any rural amenities. The suburban model seems destined for failure, because it does not take seriously the redemptive possibilities within the city." (p. 43)

While reading On Writing Well, I think I found the perfect description of the sort of "suburb" the author is railing against.  This is from John McPhee's Coming Into the Country, a book about Alaska, the section devoted to the quest for a possible new state capital:

"Almost all Americans would recognize Anchorage, because Anchorage is that part of any city where the city has burst its seams and extruded Colonel Sanders. Anchorage is sometimes excused in the name of pioneering. Build now, civilize later. But Anchorage is not a frontier town. It is virtually unrelated to its environment. It has come in on the wind, an American spore. A large cookie cutter brought down on El Paso could lift something like Anchorage into the air. Anchorage is the northern rim of Trenton, the center of Oxnard, the ocean-blind precincts of Daytona Beach. It is condensed, instant Albquerque."


Charter of the New Urbanism link

my gift to you, a favorite excerpt from Sidewalks in the Kingdom.... 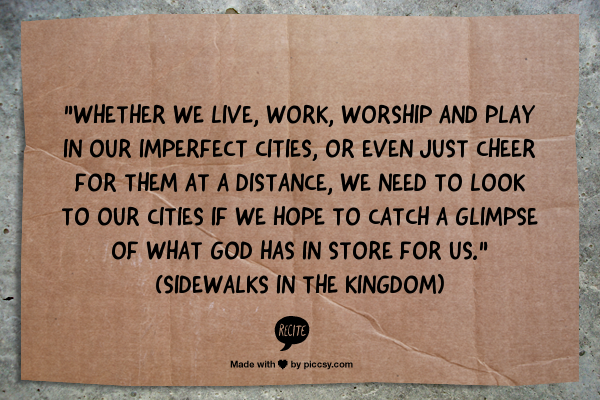 Unless you count the movies we watched as part of our annual vacation ritual (What About Bob? That Thing You Do the original Muppet Movie, etc) I didn't watch any movies this month.  As for the small screen, I'm still flirting with British Masterpiece mysteries.  This month I tried out (and thoroughly enjoyed) the current Sunday night drama Endeavour.

Falling in love with the pre-release of Jason Harrod's newest album Highliner.  I can not wait for the official release so you all can listen too!  Here's the track Paste gave as a free download with their feature article this month:

Check out Highliner tour locations so you can see Jason and his band live.

My son and two of my nephews playing and singing together during our family vacation.  The banjo Alex is playing belonged to my grandfather who never got tired of my kids asking him to play while they danced across his living room.

On the Blog (Get This Sacramental Life delivered by email.)

4.  Talking about panhandlers and sales pitches at catapult* magazine

3.  7 Quick Takes: Kendra in Guatemala, slam poetry in our back yard, Megan's coming and more!

1.  Austin Music, nice to meet you: a guest post (from September 2011!) by Andrew Murphy (not sure why this got traffic this month, but for those of you keeping track this would be the second month in a row a guest post from my son beats anything I'm writing here!)

So, what about you? What's in your book pile? What art, film, song has captured your imagination? What are you pinning or cooking or planning?

For more “What I’m Into” posts, head over to Leigh’s blog