5 Favorites: Books I Read in June + other great links from this week

before the book list, here's a a favorite image from our week

Friends who've a) journeyed with us many years and b) wondered why we've made the decision to not only be confirmed in the Anglican church but also for Brian to be ordained as an Anglican priest, may I suggest this wonderful new book? I'm loving that it's comprehensive over the history of Anglicanism (i.e., what the heck is up with Henry VIII??) but also that it is accessible and current in its description of a way of worship embraced by 80 million people across the globe today.

Here's a good review:  A Review of the Anglican Way by Thomas McKenzie at Anglican Pastor

22  The House on Beartown Road: A Memoir of Learning and Forgetting by Elizabeth Cohen: (Random House New York, 2003. 270 pages)

Since moving across the country in 2011 my fascination for history and analysis of my hometown has increased.  After a conversation with my mother and sister-in-law during their visit, I got onto my online library catalog and searched by all the names of the little towns I grew up in and around:  Binghamton, Endicott, Johnson City, Endwell, Broome County.  Exactly 3 titles came up and this is one of them.

Read a summary at the book's Amazon page:

And why haven't I read it yet?  It's well written -- both poignant and funny.  And the author is one of my favorite columnists from our hometown newspaper.  While it didn't do much for my historical understanding of the place that raised me, it did remind me that I come from such a small place that I actually knew almost everyone Ms. Cohen referenced in this book.  The sweet neighbors across the street are the in-laws to my mother's college roommate's sister.  The nanny was one of my customers when I made my living from sales.  In fact, the nanny brought the delightful Ava (Ms. Cohen's daughter and a primary character in this book) to my house one day when we were getting to know each other.

Anyway, that's not the point of the book.  Except it is -- the neighborliness of small town folk plays a major redemptive role in this story and is one of the attributes I hope to take with me no matter where I go from here.  Hopefully, Ms. Cohen has done the same.

Oh my, I enjoyed these essays.  I read the first of the collection with my writing group a couple of years ago.  Really, how can you put down a book that starts with this sentence:

"So I'm over at the Hortons' with my stretcher and mini-van and my able apprentices, young Matt Sheffler, because they found old George, the cemetery sexton, dead in bed this Thursday morning in ordinary time."

Thomas Lynch is a writer (essays and poetry) but he is also an undertaker -- second generation of an Irish Catholic family in an idyllic town in Michigan.  His work caring for the dead and their grieving loved ones provides a perspective most of us do not bring to our blank pages.  Grief informs him through his daily encounters at work, but also in his daily life as a single Dad, recovering from divorce and alcohol, teenagers and a hearty, hostile cat.

This is a book I want to own and visit again often. 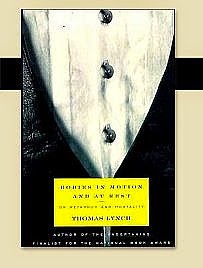 I forgot I'd already read this book until I got a few pages in.  Still I kept re-reading -- not necessarily because it's my favorite story Mr. Berry's ever told of the Port William folk, but it's definitely my favorite character description.

Don't you just feel like you know these people? The book has so much more delicious description, but here's a small taste:

I would hang up without replying, get in to my clothes as fast as I could, and hurry through the backstreets to the apartment, where Aunt Judith would have breakfast ready. She made wonderful plum jelly and she knew I liked it; often she would have it on the table for me. Uncle Andrew called coffee "java," and when Aunt Judith asked him how he wanted his eggs, he would say, "Two lookin' atcha!" singing it out, as he did all his jazzy slang.

To me there was something exotic about the two of them and their apartment. I had never known anybody before who lived in an apartment; the idea had a flavor of urbanity that was new and strange to me. ... We would eat breakfast and talk while the early morning brightened outside the kitchen window, and they would smoke, and Uncle Andrew would say, "Gimme one mo' cup of that java, Miss Judy-pooty."

Aunt Judith always asked you for affection before you could give it. For that reason she always needed more affection than she got. She would drain the world of affection, and then, fearing that it had been given only because she had asked for it, she would have to ask for more.

For my thoughts last time I read this title, go here.

*Go to my Book Pile page to see my reading lists from 2014 and previous years.*

Other good words online this week

and, on the subject of mourning...

A grace-filled weekend for us all, dear ones.

Oh, and Catapult* magazine published one of my -- uh, snarkier -- prose poems this week in their Words issue:  Prick and Drone