my family had a very busy weekend last Saturday and Sunday.

first on saturday, we attended our first ever Zooneyfest at Country Pines on Route 26 in Endicott.
it was very, very, very cold outside. lots of people there didn't seem to notice because they were drinking lots and lots and lots of beer. we had to put on lots and lots of coats and blankets because we only got to drink a little bit of beer. 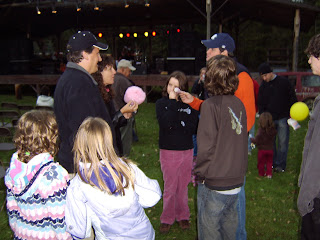 if we wanted to use LOTR as an analogy (and why not, i ask?), this evening was the party in the shire -- with a humoungous bonfire instead of Gandalf's fireworks. this party had lots of cotton candy, greasy meat, beer and live music.

my kids -- intoxicated with airy pink puffs of sugar -- thought this was the perfect way to spend a saturday night.

our friends, Chris and Lori, love to dance. they are very good -- they even know how to polka! we felt old and boring when we looked up during the first song of Frostbit Blue's set and saw Chris and Lori swinging!

Chris is the reason we went to Zooneyfest in the first place. he is friends with Joe Zunic -- the guy the festival was created for. he has Lou Gehrig's disease (some people call it ALS). he is barely over the age of 30. chris reads the bible with him -- and sometimes goes to mass with him because that's where Joe Zunic will go. i think Chris is acting like Jesus. i want to learn how to do that, too. 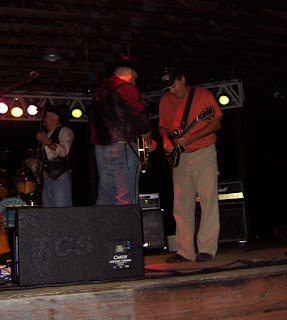 this is Scott as a guest guitar guy during Frostbit Blue's set. the lead guitar guy and vocal guy for this band is Scott's brother Nick. they pretty much rocked our heads off during this song.
Scott used to play in a band with his brother -- they played at lots of bars and stuff. i think they were probably great. Scott decided not to do this anymore after he met Jesus. Nick does not know Jesus. his band is pretty famous where we live. sometimes Scott goes to the bars and stuff to watch his brother...like at the Zooneyfest. i think Scott is acting like Jesus. i want to learn how to do that, too. 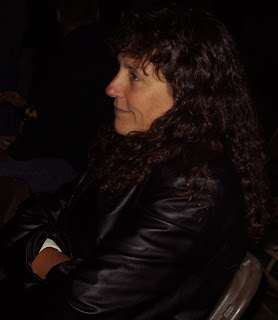 this is Coleen, Scott's wife.
i love this picture of her face.
she is watching Scott's guitar solo.
i can tell that she loves him very much.
Coleen introduced Scott to Jesus after they were married. Jesus helped them decide to stay married. they have a great story. i never get tired of hearing it.

this is the bus my kids kept wanting to play on. by the time we left it was full with drunk people. after we left there was other stuff going on in this bus. we decided we left at a pretty good time. 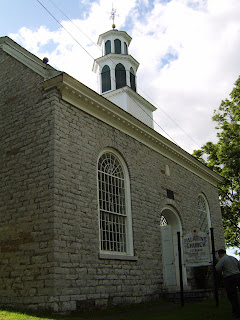 if we kept using LOTR as an analogy (and why not, i ask?), Sunday would have been like the feasts at Rivendell, that ancient and lovely place where the fancy elves live.

on Sunday we went to this church in the middle of nowhere. (there were cows in the front yard!) the church was built in 1770. inside there was a thirteen-star American flag hanging over the narrow wooden pews. the pews were very hard to sit in. especially for my friend, Neil. he is 6-feet and 8-inches tall. 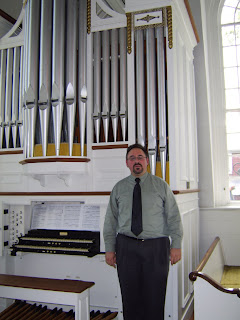 my friend Sean is the reason we visited the old church building. Sean plays the organ really, really, really well. he is even in a Guild. i do not know what that means, but i know that one thing it means is that Sean has to wear special shoes when he plays the organ. and he gets to give recitals like this one.
i think Sean is like Jesus because we do not have a fancy organ at our church. we don't play old, old songs written by the composers that Sean loves. but Sean plays for our worship team anyway. Sean does not complain that he can't wear his special shoes at our church. i want to learn how to be like Sean that way. 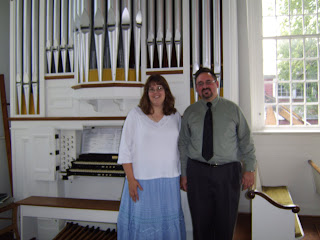 this is Laurel. she is Sean's wife. i could tell she was very proud of him this day. she is a very smart woman and she draws beautiful pen and ink pictures with hundreds of tiny, tiny details. she entered some of them in our art show this year. she also knows how to plant stuff in beautiful patterns and keep flowers alive. i'd like to learn how to be like Laurel that way.

another thing i like about Sean and Laurel is the way they love their kids. they are very good parents.

the brochure said that this organ "has direct electric action and an American Guild of Organists standard console. It contains 648 speaking pipes and two manuals." i do not know what this means, but i think it is why Sean looks like he is playing Twister instead of playing the organ. i think it is also why sometimes Sean looked like he was shooting stars out of his fingers and toes instead of playing an instrument. and why a few times i felt like one of the low loud notes was not a note but a spear pinning me right through the middle of my chest and to the back of the very hard pew.

these are the friends who rode together to see Sean play the organ -- Brian, Tami, Neil, Scott, Coleen, Margaret and Paul. Margaret made us cry during church that morning when she sang "The Lord's Prayer". her voice made my skin get all bumpy.
we were very glad we decided to spend the day together driving through farmland to find this old church. we laughed a lot. sometimes we laughed too much and had to find a gas station with a bathroom. my friends make me think about Jesus. i want to learn how to do that more.