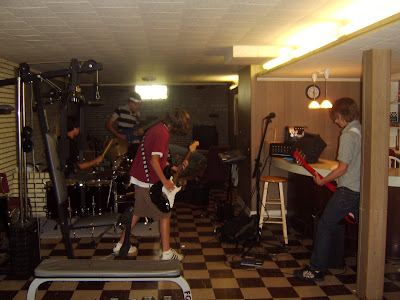 This discussion of Leonard Cohen's song Hallelujah has caused me to think through so many valuable questions and beliefs this week. For some time now I have been living two lives: mom-of-four, wife-of-Brian, occasional house-cleaner and part-time church employee by day and insatiable-scholar-of-everything-arts-and-faith-and-church by night. For some reason I've been embarrassed to let people know how much time and energy I've invested in this moonlighting gig. I'm discovering, almost daily now, many of the fleshly fears as well as enemy-influenced deceptions that have contributed to that embarrasment (read shame).

Sometime soon I'll post the story from a childhood event that seems to have been the birthing room for much of that fear and shame as it relates to my desires to be an artist -- an art-lover, art-maker and art-supporter. Just look for the title that includes the key phrases Music Machine, Grandma's Livingroom and Cranky Cousins.

Along with that post, I'll include the journal entry I wrote after a phone conversation I had with David Taylor, arts and teaching pastor at Hope Chapel in Austin, TX. (what a gift of kindness that phone call!). It has been some time since I've felt like I've "heard from God" on His purposes, calling, on my life. (many reasons contribute to that, but that's another story for another day) In the past few weeks, though, I've begun to wonder if God is calling me from a place of reaction to my youth and, instead, calling me toward a pro-action for my adulthood.

Pastor Craig's teaching during the Kingdom series on Dallas Willard's exhortation that we are becoming who we will be -- forever seems to have brought me to a sort of crossroads. (is there such a thing as a mid-life crisis for a 36-year-old??)

For that reason, I didn't want to just blow smoke in response to this Hallelujah discussion. I didn't want to just throw out some cliche' 'why should the devil have all the good music' type of response. When I was a child, I spoke and thought and reasoned as a child. But when I grew up, I put away childish things...

I feel like God is asking me to go up to the next level spiritually, emotionally, physically and intellectually. To move closer to becoming like Christ, and in turn become more like myself. The person I will be - forever.

And all of these seems more poignant against the soundtrack of my sons' band, Dot Rama, rehearsing in the basement. They have their own insomnia-inducing dreams. I do not become more like Christ and more like myself for only myself. What I do and believe and live affects people around me -- especially those five other people who live with me day in and day out.