from the journey of a blind woman: a discussion on Hallelujah (part 1) 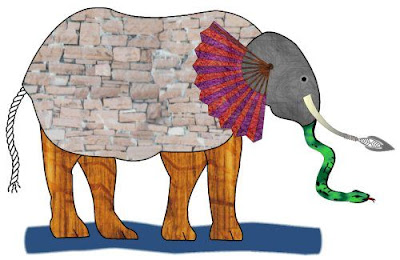 
I kept having to ask myself, "Why am I doing this? Why do I care? I like the song. I saw it covered in a cool way by Bon Jovi. I enjoyed the experience. Isn't that enough?"


Consider this statement:"We must learn again that vision is not for private consumption. My vision is my vocation; the world is waiting for it to find concrete form. So few people, alas, still perceive the art in which they participate -- music, films -- as an arena for exchange of visions, for discovery of our common human vocations...Many of our contemporaries think of art...simply as relaxation or personal therapy. They use their imaginations to flee into their mental cocoon, to weave a personal lifestyle not open to discussion."


So, hurray for the six blind men of Indostan for at least talking about the elephantin the room! Sadly, it doesn't seem that they got very far in listening to each other, "Of course, an elephant is a wall, or a rope or a snake. This is what my personal experience dictates as truth!" But you got to start somewhere.


In the spirit of learning from the six blind men, and because this conversation about a song and a song-writer seemed to become more than a simple discussion about songs and television shows and 8o's rockers. And, because it seemed, to me, to grow into a deeper discussion about some pretty important subjects -- art and faith; sacred and secular; art-making and art-responding and all that. And, because we have this wonderful vehicle of discussion, our blogging community, why not further the conversation right here, right now?


And, why not? What follows is my very ameteur attempt at breaking down the discussion-- generated here and elsewhere -- regarding this piece of a art, a song Hallelujah, written by an artist, Leonard Cohen. Please be patient with me, gentle readers, as one blind man to another.

2. Is it possible to mix the sacred and the secular, the pure and the profane, without one diminishing the other?

3. Lastly, what the heck did Leonard Cohen mean when he wrote this song, anyway?


Alright, I'm going to go hang out with the elephant a little bit longer.
I'll be back soon.


In the meantime, feel free to give your input. From the discussion here and here, do you think these three stated questions are a fair summary?
at 5:16 AM