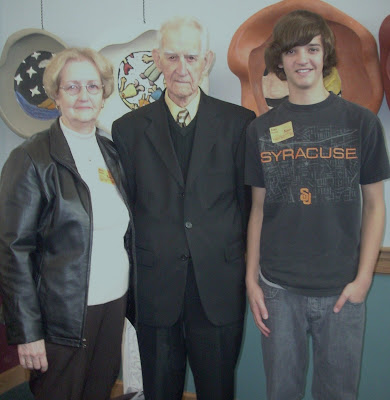 
Two years ago today I watched my husband watch his father die. It was one of the most gut-wrenching things I've ever done. (I wrote about it here.)

Today -- two years later to the day -- I will stand by Brian at his 97-year-old grandfather's funeral. Death and grief are uncanny figures, creeping up on us without invitation or welcome. But we are forced to sit with them until they choose to leave us, promising to come again soon.

Brian and I spent the afternoon together yesterday, resting, reminiscing, drinking cabernet sauvignon, watching the Yankees. I asked him if he remembered the first time I had ever seen him cry. He said yes, he did. He said it was the first time he realized how much he needed me. We were only fifteen? Sixteen? He stopped by my house unannounced one weeknight. My little sister opened the door and Brian just kind of slumped into the chair inside the doorway and started crying. My little brothers and sisters scattered and I hugged Brian. I wasn't sure what else to do. Eventually he was able to say that his grandfather had a heart attack. And that he was scared. That he loved his grandfather very much and didn't want to lose him. That his grandfather was a father to him.

But Grandpa Morgan was a hearty old soul. He recovered from that heart attack as well as a bout with cancer and other ailments throughout his tenure on this earth. Heck, the man bowled a couple of times a week until a year or so ago. I hope he passed along his genetic sturdiness to my husband and children.

So today we will remember this man, Lester Grant Morgan. We will remember him by telling stories. Some will be slightly exaggerated because that is what you do at funerals. Some will be skipping whole paragraphs of unflattering realities about the flawed man who did not speak often of his love for his family. Those will be left unspoken, set aside for each to deal with in his own private grieving space.

For sure, we will talk about Grandpa-the-Snappy-Dresser and Grandpa-the-Big-Tease and Grandpa-the-Father-Figure for the single mother of five - er, active - Murphy kids. If there is a lull I might tell the story of how we wanted to name our second-born after Lester's middle name, but the doctor guffawed at the similarity between our chosen name, Alexander Grant, and a certain historic figure. We caved and christened our screaming infant Alexander Morgan.

But I have a feeling there will not be a lull. This family likes to tell stories. Instead, I will ponder my own memoires with this man whose obituary made me cry because his life epitomizes an entire generation in this part of New York state: World War II Army veteran, Endicott-Johnson factory worker, longtime church member and deacon, father of three, grandfather of 13, great-grandfather of 26, great-great-grandfather of 2 (soon to be 3). And husband of one for seventy years. Seventy years. The obituary does not have the space to tell us how many of those years were spent watching the painful decay of his wife into Alzheimer's. Or how hard it was for him to spend his last days in the same nursing home he sent his wife to in her last years. But these are stories we will remember. And tell to our children and their children.

The last time Brian and I saw Grandpa was this past Tuesday morning. The hearty old soul was fighting a contest with his weary body. And losing. I was reminded of the first line in my essay about watching Brian's dad pass away: Death is a violent visitor.

To know that Jesus conquered death and the grave means a lot more to me when I am given a ring-side seat to this contest between life and it's arch-enemy, death. Grandpa was made to live and not die. He was designed to breathe deeply and bowl 300 games and wrestle with his grandchildren and eat bacon. Death is a violent visitor, but his stay is short-lived. And today we will tell stories about that kind of Jesus-hope that Grandpa passed on to his children and his children's children and their children, too. Yes, he passed it along quite imperfectly, but he passed it on, nonetheless. Our true Father was perfect and even on his worst days, Grandpa mirrored a tiny glimpse of that truth.

We will sit with the visitor and mourn for awhile. And then we will hope.