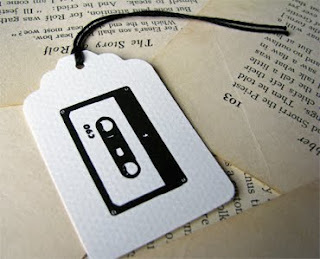 i made you a mix tape of all my favorites from this week!
**note:  for some reason blogger is giving me html fits today!  Sorry about the way this post looks.**
Books:
Silence by Shusaku Endo
A couple of excerpts from the review of our book discussion I sent to IAM Readers Guild.

"Endo masterfully depicts a stark and silent world -- in the subtle descriptions of buzzing insects, withering heat and rotten food, dark water and crimson blood stains on dusty courtyards.  His storytelling had a sobering effect on us all and we were grateful for the chance to come in from the cold January evening and cheer each other with brisk conversation, merlot and gummy fish. It was a good evening and we are looking forward to gathering again."

"Although it is most likely a discussion group taboo, I couldn’t help myself by asking right at the top of the evening: “Thumbs up or thumbs down?”  The answer was predominantly, “Thumbs in the middle.”  The explanation many of the readers gave was that they felt the book was written well and very readable, but they were disappointed by the story and feeling weighted down by the subject matter.
This was an honest response and a perfect way to launch almost two straight hours of discussion.  For starters, most of us found we did not have a lot of sympathy for Rodrigues or Ferreira, and only a tiny bit for the decidedly, Gollum-like Kichijoro.  Many of the readers wished we could have spent more time with Garrpe.  While most did not identify with a character so  much as an identification  from our own struggles experiencing the silence of God.  We represented a few different faith backgrounds and there seemed to be a direct correlation between where we had come from, where we were now and what we believed about the silence of God.  Is He not listening?  Not answering?  Answering, but saying no? Are we trying to hear Him through religious practices or a living, breathing relationship? "
Here's the whole review at IAM's website.
Also, while you're there, sign up for their mailing list.
Links:


Music:
Fireflies and Songs, Sara Groves:  I guess it was my week to reconnect with this songwriter, woman, Christ-follower, wife, mother, and advocate.  I tend to be very slow to purchase music with a Christian label.  I hope it's not because I'm one of those cranky CCM-cynics.  But I am trying to be discerning.  But I haven't been disappointed by this musician yet.  Not once.  She writes simple tunes, wraps them around words expressing both the mundane and the sublime and then sings them to us, beautifully,  from a place that sounds like the bottom of her heart. This album seals the deal: I am a Sara Groves FAN and I'll tell everyone who wants to know. 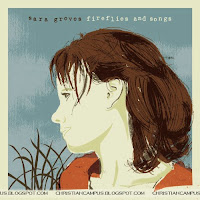 The album is completely intact with beautiful songs, but the one that almost wrecks me every time I listen to it?

it's a sweet, sweet thing/ standing here with you and nothing to hide / light shining down to our very insides/sharing our secrets, bearing our souls / helpingeach other come clean

Good Lord, these words are true -- and beautiful.  And they make me think of this story from my own journey in my marriage and in a grace community.

At the risk of sounding like a stalker I have to thank Haley at carrying ballast yet again.  It was her post about  another inspiriting song on the album, This House, that reminded me I hadn't yet listened to this album. Thanks again, Haley!

Films & Television:
Too many projects this week to watch much on the big or small screen.


I just sent in my registration for this retreat for those involved with the shepherding of artists..  Joy!

And please forgive me for not posting the winner of this month's Readers Guild book this morning, as promised.  The winner is Melinda Jahn!  And, since I don't happen to have a photograph of Melinda, here is one of her adorable son at last fall's Art Show on Main.  Isn't he a cultured little fellow and isn't his daddy nice to give him such a great view? 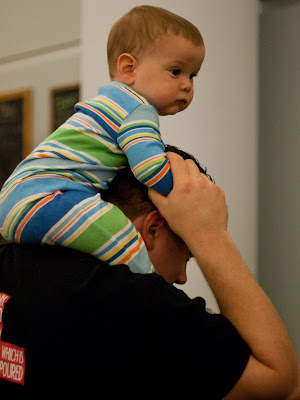