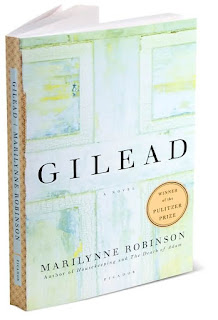 “You reached up and put your fingers on my lips and gave me that look I never in my life saw on any other face besides your mother’s. It’s a kind of furious pride, very passionate and stern. I’m always a little surprised to find my eyebrows unsigned after I’ve suffered one of those looks. I will miss them.
It seems ridiculous to suppose the dead miss anything…”

Who wouldn’t want to keep reading after opening paragraphs including these sentences?  Someone with a small child is about to die?  Someone about to die with clear mind enough to notice the fine nuances of his child’s facial expressions? And then to write about them?  What kind of story have we walked into?

The Endicott gathering  of the Reader’s Guild kept asking that question many ways “what kind of story is this?”  The narrative structure Marilynne Robinson uses was unfamiliar to most of us, making us struggle through some parts and get wrapped up in others.

Ultimately, we decided that reading John Ames’ private letter to his son felt something like getting caught in a conversation with a wizened, older relative over coffee and pie in the living room, while the rest of the family is cleaning up dinner dishes in the kitchen.  Sometimes rambly and trailing, but worth listening for the nuggets of beauty, wisdom, history.

In that spirit, we’ve selected some of our favorite excerpts to remember.  These are the statements John Ames made that, were he our old uncle, we’d pass along at family gatherings in his memory.

“…any father, particularly an old father, must finally give his child up to the wilderness and trust to the providence of God. It seems almost a cruelty for one generation to beget another when parents can secure so little for their children, so little safety, even in the best circumstances. Great faith is required to give the child up, trusting God to honor the parents’ love for him by assuring that there will indeed be angels in that wilderness.”

“So my advice is this – don’t look for proofs. Don’t bother with them at all. They are never sufficient to the question, and they’re always a little impertinent, I think, because they claim for God a place within our conceptual grasp. And they will likely sound wrong to you even if you convince someone else with them…The Lord gave you a mind so that you would make honest use of it. I’m saying you must be sure that the doubts and questions are your own, not, so to speak, the mustache and the walking stick that happen to be the fashion of any particular moment.”

And, lastly, this excerpt describing the moment John Ames blesses his namesake.  After all, don’t our hearts burn within us while we linger among the old?  We hover hoping that among all their minds think to say, words of blessing will be the gift of all our half-hearted listening?

“Then I said, ‘The thing I would like, actually, is to bless you.’

He shrugged. ‘What would that involve?’

‘Well, as I envisage it, it would involve my placing my hand on your brow and asking the protection of God for you. But if it would be embarrassing…’ There were a few people on the street.

‘No, no,’ he said. ‘That doesn’t matter.’ And he took his hat off and set it on his knee and closed his eyes and lowered his head, almost rested it against my hand, and I did bless him to the limit of my powers, whatever they are, repeating the benediction from Numbers, of course— ‘The Lord make His face to shine upon thee and be gracious unto thee: The Lord lift up His countenance upon thee, and give thee peace.’ Nothing could be more beautiful that that, or more expressive of my feelings, certainly, or more sufficient, for that matter. Then, when he didn’t open his eyes or lift up his head, I said, ‘Lord, bless John Ames Boughton, this beloved son and brother and husband and father.’ The he sat back and looked at me as if he were waking out of a dream.”

May the words of John Ames bless us all.