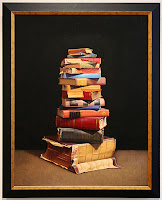 I've been working my way through the Christmas stash of book-gifts.  Not a spoiler in the bunch. The two snow days this week made lots more time to curl up next to the fireplace, reading.  (To all my moms-of-kiddos friends, hang in there -- reading time will come again. I promise!)


When I first started this blog in 2006 (is it possible that this April marks my fifth anniversary of blogging?!?) one of my goals was to nurture a forum that kept me accountable for the cultural goods I consume.  Of course, I didn't really know then to articulate the goal in those terms.  The dawning of the truth that as in in worship so as in culture -- I did not make it, but it is making me -- has been a gradual enlightening.


Having also gotten quite clear with the truth that I will never be a professional book reviewer, I've let myself off the hook and changed up the way I document my reading.

Published:  The University of Wisconsin Press, 2005

General Impression:  I am not very experienced in appreciating poetry.  I am surprised how much I enjoy reading it -- even when I'm not entirely certain what I'm reading.  Maybe it's the "concept-girl" in me that gets poetry.  The words don't have to straighten up in a prosaic line of accessibility.  I feel poetry like musical memory more than read it like words in books.  In Jagged With Love, Ms. Childress wrote words that felt like the times in the early-80's when I walked to the store with my older, adored cousin.  She in her tanned and glistening mid-teens; I in my early , nubby adolescence.  I'll never forget the electric fright of men driving by in cars, honking their horns, craning their necks to get a look at her.  Or was it us?  I didn't think so, but it felt thrilling to be walking so nonchalantly alongside such danger.    And if I'd known how to put words to all the layers of  knowing that have settled down into my sexual consciousness since my earliest memories, some of them would sound like the lines in this book.

Favorite poem title:   On Learning the Percentage of Non-Professional Head and Neck Massages Which Do Not Lead to Sexual Intercourse

We always take the sky, fold it over ourselves,
the soil, run it across our skin and cling to it,
savoring the tart of a lemon, palming a bar of soap
even when our hands are clean, naming the insects

that fly across the white bulb of moon late at night,
rakishly loving the one who knows our smell,
saying (as if they are not questions), Isn't this how
we stay alive and Why shouldn't I burrow here.

2.  Caring for Words in a Culture of Lies


Marilyn Chandler McEntyre believes that we as a culture, generally, and as a faith community, specifically, have not stewarded well the gift of language.  After making her case that the Word  cares about words, she shares twelve thoughtful strategies to steward language: Love Words, Tell the Truth, Don't Tolerate Lies, Read Well, Stay in Conversation, Share Stories, Love the Long Sentence, Practice Poetry, Attend to Translation, Play, Pray, Cherish Silence.


Sentence I Most Wish Fox News Channel Addicts Would Read:


"...two other points worth mentioning about the consequences of language abuse: as usable words are lost, experience becomes cruder and less communicable. And with the loss of the subtlety, clarity, and reliability of language, we become more vulnerable to crude exercises of power."

"But the high play of witty conversation can degenerate into exhibitionistic banter if it is not tempered by an opposite and perhaps even more important virtue, which is the capacity to hold one's peace, to wait, to pause for thought, to consent to shared silence. Words need space. Witty, weighty, well-chosen words need more space than others to be received rightly, reckoned with, and responded to. That space, the silence between words, is as important a part of good conversation as rests are a part of a pleasing, coherent musical line. The silences in conversations honor and support the words they carry, as water supports the vessels that float on it. Only in silence can the "listening into" take place -- the pausing over words, meanings, implications, associations -- and the waiting -- for the Spirit to speak, for the right response to surface.

At its deepest level, good conversation holds a balance we seek in prayer between speaking and listening, waiting for the unplanned, epiphanic moment that comes unbidden in the midst of what we thought we were pursuing. Those silences also distinguish substantive conversation from idle chatter that fills all the "air time" available, often as a protection against the silences in which a new thought might take us where we're not sure we want to go. When silences are allowed, conversation can rise to the level of sacred encounter."

General Impression:  I'm wary of "how-to-write" books.  Still, this was insightful and full of model texts from great literature.  I liked that part a lot.  This won't go on my "read again" shelf, but I hope that much of the instruction will show up in my writing.

4.  The Liturgical Year: the spiraling adventure of the spiritual life

General Impression:  This is not the most in-depth, academic rhetoric I've read on the subject of living the liturgical year, but its elegant simplicity and warm hospitality make it one I'd recommend to any reader wanting to better understand the value of living the rhythms of the Gospel marked by liturgical time.

"... the purpose of the liturgical  year is to bring to life in us and around us, little by little, one layer of insight after another until we grow to full stature in the spiritual life. Intent on living a spiritual life that matters rather than a spiritual fad that fascinates or a spiritual program that anesthetizes the soul to everything but the self, we find out in the liturgy what makes life matter by following Jesus through every element of it."
at 9:10 PM