"Advent is about learning to wait. It is about not having to know exactly what is coming tomorrow, only that whatever it is, it is of the essence of sanctification for us. Every piece of it, some hard, some uplifiting, is sign of the work of God alive in us. We are becoming as we go. We learn in Advent to stay in the present, knowing that only the present well lived can possibly lead us to the fullness of life." (Chittister)


During Advent I'll forego my weekly Buy More Art posts in order to share almost-daily meditations of Scripture, hymns, and art reflecting the alternate narrative and subversive time of waiting in hope for the Christ who came, the Christ who will come again and the Christ now among us. 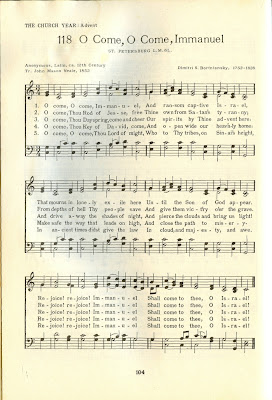 "In the first centuries the Church had a beautiful custom of praying seven great prayers calling afresh on Christ to come, calling him by the mysterious titles he has in Isaiah, calling to him; O Wisdom. O Root! O Key, O Light! come to us!"  (Malcolm Guite)

Isaiah 11:1:
"But a shoot shall sprout from the stump of Jesse, and from his roots a bud shall blossom."
Isaiah 11:10:
"On that day, the root of Jesse, set up as a signal for the nations, the Gentiles shall seek out, for his dwelling shall be glorious."
Jesse was the father of King David, and Micah had prophesied that the Messiah would be of the house and lineage of David and be born in David’s city, Bethlehem (Micah 5:1)

The original antiphon in Latin and English (via Malcolm Guite)

O Radix
O Radix Jesse, qui stas in signum populorum,
super quem continebunt reges os suum,
quem Gentes deprecabuntur:
veni ad liberandum nos, jam noli tardare.
O Root of Jesse, standing
as a sign among the peoples;
before you kings will shut their mouths,
to you the nations will make their prayer:
Come and deliver us, and delay no longer

Listen to the original antiphon sung in Latin.


O Radix
All of us sprung from one deep-hidden seed,
Rose from a root invisible to all.
We knew the virtues once of every weed,
But, severed from the roots of ritual,
We surf the surface of a wide-screen world
And find no virtue in the virtual.
We shrivel on the edges of a wood
Whose heart we once inhabited in love,
Now we have need of you, forgotten Root
The stock and stem of every living thing
Whom once we worshiped in the sacred grove,
For now is winter, now is withering
Unless we let you root us deep within,
Under the ground of being, graft us in.

listen to ‘O radix’ on Audioboo


O Radix Jesse
O Root of Jesse, out of you springs up the kingdom of God.No other kings or nations have the power you possess,so they keep silent before you and the witness of your kingdom.Come with your kingdom now and save us.

(as written by Steve Bell in collaboration with Malcolm Guite)

Keening for the Dawn: Christmastide from Steve Bell

Sounding the Seasons: Poetry for the Christian Year by Malcolm Guite

"I keep expecting loud and impressive events to convince me and others of God's saving powers. Our temptation is to be distracted by them. When I have no eyes for the small signs of God's presence ... I will always remain tempted to despair." -- Henri Jozef Machiel Nouwen, Gracias! A Latin American Journal (1983)

(via Diary of An Arts Pastor)