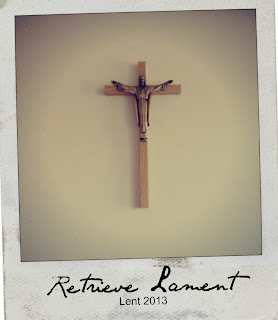 "Once, ritual lament would have been chanted; women would have been paid to beat their breasts and howl for you all night, when all is silent. Where can we find such customs now? So many have long since disappeared or been disowned.

That’s what you had to come for: to retrieve
the lament that we omitted."
(Ranier Maria Rilke, from Requiem For A Friend)

During Lent I'll share almost-daily meditations of Scripture, hymns, and art reflecting this time of tension between dying and birth.

Holy lament -- as grief -- can appear as holy anger.  In our fallen world, we seldom see holy anger but we have ancient images in Scripture reminding us that a holy God can not coexist with sin.

All day as I pictured Moses in his holy ferocity breaking the stone tablets and Jesus in his righteous fury casting evil out of the temple, I thought of this stanza from the modern hymn In Christ Alone:


In Christ alone! who took on fleshFulness of God in helpless babe!This gift of love and righteousnessScorned by the ones he came to save:Till on that cross as Jesus died,The wrath of God was satisfied -For every sin on Him was laid;Here in the death of Christ I live.

Any time I've sung that song I can barely make it through the line "The wrath of God was satisfied".  When we shy away or explain away or run away from a wrathful God, we miss the miracle of the Gospel -- God took out His wrath on God.

I think of that hymn and I think of a certain scene between Gandalf and Bilbo...

Deuteronomy 9:4-12When the Lord your God thrusts them out before you, do not say to yourself, ‘It is because of my righteousness that the Lord has brought me in to occupy this land’; it is rather because of the wickedness of these nations that the Lord is dispossessing them before you. It is not because of your righteousness or the uprightness of your heart that you are going in to occupy their land; but because of the wickedness of those nations that the Lord your God is dispossessing them before you, in order to fulfill the promise that the Lord made on oath to your ancestors, to Abraham, to Isaac, and to Jacob. Know, then, that the Lord your God is not giving you this good land to occupy because of your righteousness; for you are a stubborn people. Remember and do not forget how you provoked the Lord your God to wrath in the wilderness; you have been rebellious against the Lord from the day you came out of the land of Egypt until you came to this place. Even at Horeb you provoked the Lord to wrath, and the Lord was so angry with you that he was ready to destroy you. When I went up the mountain to receive the stone tablets, the tablets of the covenant that the Lord made with you, I remained on the mountain for forty days and forty nights; I neither ate bread nor drank water. And the Lord gave me the two stone tablets written with the finger of God; on them were all the words that the Lord had spoken to you at the mountain out of the fire on the day of the assembly. At the end of forty days and forty nights the Lord gave me the two stone tablets, the tablets of the covenant. Then the Lord said to me, ‘Get up, go down quickly from here, for your people whom you have brought from Egypt have acted corruptly. They have been quick to turn from the way that I commanded them; they have cast an image for themselves.’

Therefore, as the Holy Spirit says,‘Today, if you hear his voice,do not harden your hearts as in the rebellion,   as on the day of testing in the wilderness,where your ancestors put me to the test,   though they had seen my works for forty years.Therefore I was angry with that generation,and I said, “They always go astray in their hearts,   and they have not known my ways.”As in my anger I swore,   “They will not enter my rest.” ’

"Do not take me as some conjurer of cheap tricks.  I'm not trying to hurt you....I'm trying to help you."

Now it's your turn!  What art are you enjoying this season?
Tell us about it in the  comments below.
If you've written your own post, share the link.

"Let him easter in us, be a dayspring to the dimness of us, be a crimson-cresseted east." Gerard Manley Hopkins, The Wreck of the Deutschland