Third week of Eastertide with bread as art, fisherman as fisherman, me as a poet and the Gospel of John as our text

Trap Boat Fishing for Scup with the V.I.O. POV.HD from VIO on Vimeo.

21 After this Jesus revealed himself again to the disciples by the Sea of Tiberias, and he revealed himself in this way.2 Simon Peter, Thomas (called the Twin), Nathanael of Cana in Galilee, the sons of Zebedee, and two others of his disciples were together. 3 Simon Peter said to them, “I am going fishing.” They said to him, “We will go with you.” They went out and got into the boat, but that night they caught nothing.

4 Just as day was breaking, Jesus stood on the shore; yet the disciples did not know that it was Jesus. 5 Jesus said to them,“Children, do you have any fish?” They answered him, “No.” 6 He said to them, “Cast the net on the right side of the boat, and you will find some.” So they cast it, and now they were not able to haul it in, because of the quantity of fish. 7 That disciple whom Jesus loved therefore said to Peter, “It is the Lord!” When Simon Peter heard that it was the Lord, he put on his outer garment, for he was stripped for work, and threw himself into the sea. 8 The other disciples came in the boat, dragging the net full of fish, for they were not far from the land, but about a hundred yards off.

9 When they got out on land, they saw a charcoal fire in place, with fish laid out on it, and bread. 10 Jesus said to them,“Bring some of the fish that you have just caught.” 11 So Simon Peter went aboard and hauled the net ashore, full of large fish, 153 of them. And although there were so many, the net was not torn. 12 Jesus said to them, “Come and have breakfast.” Now none of the disciples dared ask him, “Who are you?” They knew it was the Lord. 13 Jesus came and took the bread and gave it to them, and so with the fish. 14 This was now the third time that Jesus was revealed to the disciples after he was raised from the dead. 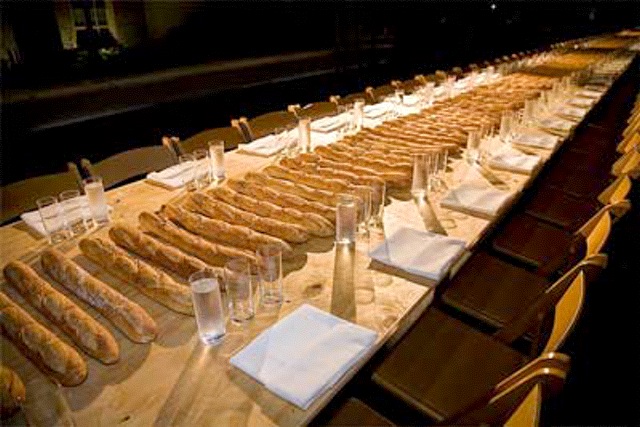 Food installation artist Jennifer Rubell creates Reconciliation at the National Portrait Gallery in Washington, D.C. (2009).  Guests participated in the artwork by sitting at table and sharing from the 1,500 baguettes layed out on plywood tables.  No serving utensils were provided so guests had to literally "break bread together" as a re-enactment of the simple gestures of reconciliation.

A Poem: in which I adapt from work by Luci Shaw

Recognizing the Bread of Life

No, He is too quick. We never

got to say thanks. He was there
closer breath than our mourning prayer.
Remembering
backward, we can not imagine how
we did not recall His voice.

Even if we heard back then
those three years plus seven miles of teaching
how would we retell the new-breathed meaning His
words made Word raised upward in the air
with all His strong bones executing
every law letter? or the strange
bright tales sprouting
through crusted-over faith
like just-activated beads of yeast?  Who could
preach the words into man's heart
as the Spirit comes close enough to raise
to life the decaying rot inside?  Who will
diagram the hermaneutic
of redemption, the cadence of re-birth?
or digestively analyze rhetoric
made flesh?  or chew through
propositions as they moisten in the cup
passed 'round?   Will anyone sit beside
the broken loaf? and stir the bloody
grapey liquid? and explain
the symbol or substance
telling truth that no sermon made us recognize?

Enough. Refrain.
Digest a finished work. Repeat.
Today -- another wordless sermon -- the ingested
doctrines of our faith made plain
the Christ we need to know.