Waiting for our next step 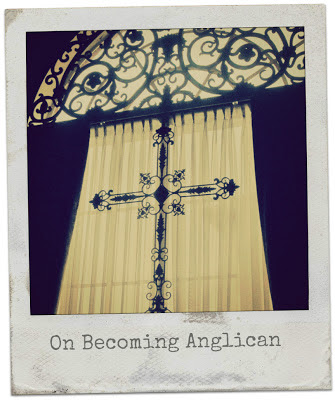 I've been re-reading Eugene Peterson's memoir, The Pastor.  I first read it in spring of 2011 when Brian and I were restless and uncertain about our future, and knowing for certain only about one thing:  God had called Brian to be a pastor.  I read much of the book out loud to him at that time, while we sat kind of befuddled in the in-betweenness of knowing one thing and knowing nothing else.  We're in a similar place again.  Thankfully, we have a bit more confidence and a bit more understanding, but once again, not much else.  I needed to listen to the comforting story of Pastor Pete's journey into clarity of vocation, his motto from the Denise Levertov poem about vocation : every step an arrival.

When we read the book in 2011, chapter 25 "Presbycostal" didn't stand out too much to me.  In the chapter Eugene Peterson -- raised in a deeply Pentecostal church culture --  shares his story of discovering Presbyterianism (or, rather, he'd probably say Presbyterianism finding him).  At that time, how would I have known that within a few months we'd be moving our family across the country to join in the life of an Anglican church?  Not only that, but to begin Brian's ordination process within the Anglican communion.

I couldn't have known.  I might have been able to articulate that April in 2011, just after Easter, that we considered ourselves "closet Anglicans".  My friends could have told you how tired they were of hearing the word "liturgy" and "historical church".  Now, we look back and it's fairly plain, each step an arrival.

I've tried to articulate our confirmation in the Anglican church as a way to embrace all that was good and true and beautiful from our Baptist and non-denominational roots.  Rather than throwing overboard everything we'd learned and received from our first 40 years,  we only desired to move ourselves and our family into a larger, sturdier ecclesial ship. One that still leaks and still rocks in the waves stirred up by the world, the flesh and the devil, but rocks much less violently than had been our experience in churches that create vision and mission and liturgy from scratch.  In comparison, that had felt like sitting in the middle of the ocean in a creaky rowboat with every man rowing in a different direction.

Anyway, I still seem to only be able to speak our Anglican confirmation in metaphor.  That's, perhaps, why chapter 25 in The Pastor caught my attention in a fresh way with this re-reading.  Pastor Pete has arrived ahead of us in articulating with far more eloquence.

"And now ten years later I was not only a Presbyterian but, of all things, a Presbyterian pastor. The move from Pentecostal to Presbyterian didn't seem like a big thing at the time. It still doesn't. Certainly nothing that could be called a crisis. I was not aware that I was changing any part of what I believed, and certainly not how I lived . But was I still Pentecostal?

I assumed I was. I hadn't renounced anything that I had grown up believing. I wasn't aware that my Christian identity had eroded in any way.

[...] I was not aware of choosing to be a Presbyterian. I didn't go over the options available to me, study them, interview representative men and women, assess the pros and cons, pray for discernment, and then apply for membership. The Presbyterians needed a coach for their basketball team. I knew how to do that and did it. But as the months added up to years, I kept being assigned to Presbyterian churches for seminary fieldwork. I was never self-consciously a Presbyterian. I am still not. But something was goin on, incrementally, that formed an identity that vocationally fused Pentecostal and Presbyterian. Later I learned that there was a name for it: presbycostal.

What I needed, but didn't know that I needed, the Presbyterians offered me: the gift of a living tradition. I grew up in the West in a town that was only forty-three years old when I was born. Pentecostalism as a denomination was even younger than that. I was a child of the first generation of Pentecostalism in America. Growing up, I had almost no knowledge or awareness, maybe none,t hat anything of Christian significance had taken place between the Day of Pentecost in Jerusalem ten days after Jesus had ascended into heaven and the Azusa Street revival in Los Angeles in 1903 that marked the birth of Pentecostalism in America. My church history consisted of the names of half a dozen evangelists holding tent revivals in the Northwest.

[...] As an adolescent, I much preferred [evangelist] Jimmy McGinnis - I knew his son [from playing each other in high school basketball] - to Martin Luther, who had been dead five hundred years. As a Pentecostal, church history was a current event. I felt sorry for my Lutheran friends who had to dig out their stories from the cemeteries. But now as a Presbyterian adult, I was discovering that my Christian family tree had roots all over the world and through twenty centuries. Presbyterianism grafted me into immense continuities of prayer and worship, of saints and artists, of countries and continents. I begant to relish the sense of stability, of continuity, of being on speaking terms with personal names that held stories that touched my own and extended it. There was texture and depth to be explored, intricacy and complexity. There was far more to learn and assimilate about the Christian way than the latest stories, wonderful as they were, of Jimmy McGinnis and his ilk. ...

[...] I wasn't about to give up any of my Pentecostal identity -- but I also realized that I could never be a pastor worth his salt if I couldn't integrate it into my Presbyterianism, a tradition that puts me into a comprehensive speaking relation with all my brothers and sisters in all forms that the church takes across the country and through the centuries...

Pentecostalism and Presbyterianism were for me both irreplaceable gifts, polarities that made a continuum, not opposites in tension."

I add my yes.  Now, we wait in the tension for the next step, and the next arrival.