Ballycumber
(n.) One of six half-read books lying in your bed  (see the 8 other Words About Reading That Book Nerds Need to Know at Bustle)

"It's little more than a day off for shopping now, but when Labor Day was first observed, it wasn't all fun and back-to-school sales. Its passage as a federal holiday, in 1894, was a sort of peace offering from President Grover Cleveland for the killing of a dozen or more striking railway workers." am no superhero. Neither is my wife. But we have a bond that somehow enables us to save each other from basic human weakness. This is its own kind of superpower."

The history of Labor Day is sort of a caricature of the daily injustices or annoyances of the working life.  I spend a lot of time listening to my young co-workers anguish over the gap between what is and what they wish it would be.  There's a depth in our human longing for work that is valuable and valued. May the Church nurture excellent employers, employees and workplaces in gratitude for the Creator of work.

"But this is not moral ambiguity for moral ambiguity’s sake. What Rectify reveals is that this question – “Am I good?” – is one that all of humanity is asking. And in the show’s world, there is a deep nobility in the asking. Rectify is humanist in the best way, in that it’s rooting for all its characters and sees true beauty in their struggle to find peace.

The show’s naturalistic photography grounds the characters’ existential struggle in something hopeful. As we watch we see the world as a beautiful place, even as horribly unjust things happen. In this Rectify captures the duality of a Christian theology of humanity, which recognizes both the beauty of our imago dei and the insecurity of our exile from the garden. We are all asking, “Am I good?” and waiting for the one whose image we’re created in to give us the answer."

I've mentioned this program a few times, and I plan to keep mentioning it until at least a few of you watch it for yourselves and tell me what you think.  In the meantime, Josh Pease has some good insight.  (Seasons 1 & 2 are streaming on Netflix now.  You can purchase Season 3 on Amazon Instant Video.)

| 3 | It's pics from the past of hometown Austin, TX at Gee Mail

"WELCOME TO AUSTIN - Most of us think of it as it is today, a modern large city. Well I thought I'd show some pics of the way it was!"

This post from a mass email a couple of old Austin natives sent around contains an intriguing collection of historic Austin photographs.  I found a couple of our groceries (just outside of neighborhood for the bulk of our weekly groceries at Texas-beloved HEB and then a couple of blocks walk for the daily essentials & odds 'n ends).


It's a new experience for us living in a city that's never seen a decrease in population since its founding.  Some historical population numbers:


Oftentimes, it feels like we live in a big city that wants to think of itself as small which has benefits (friendly people, emphasis on local business) and its detriments (poor road planning, poor transit system, various forms of segregation).  We sure are glad that Austin embraced our family in 2011, and that a few of the locations in these photos are still recognizable (and enjoyed) by our family today! 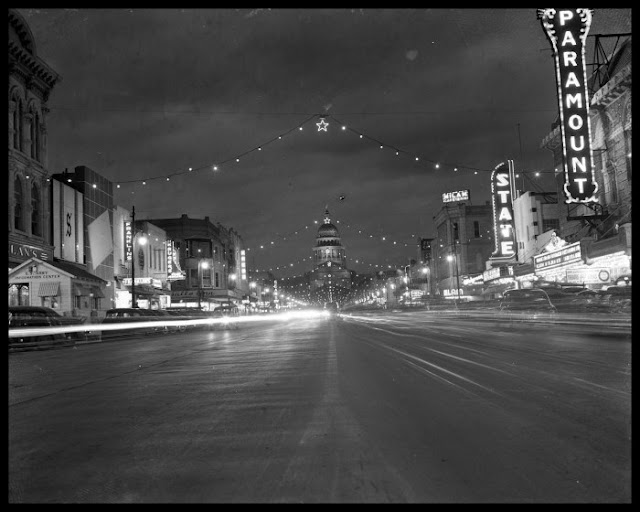 There are so many more great photos in the post!  Austin friends, I'd love to hear what memories they spark.

Also, here's a lovely, illustrated map of Austin by neighborhood.

"I sometimes play a game with myself -- which of the world's greatest cultural treasures would be worth getting rid of it meant you could not have air conditioning. I am an ardent (if screwed up) Christian, and I have taught classical literature, and I would still be willing to get rid of the Sistine Chapel."

Ha!  Yes, yes, yes.  I talk to octogenarian native Texans who mourn the gain of central air because in the old days people cooled off on their front porch in the evenings.  Now we all hide like animals in the darkest, coolest corners of our home until about November.  And, everyone knows by now, that September only means Texas gets hotter-er, and we add fans to the a/c.

Fans with A/C means it's "summer-er" in Texas.

I've been enjoying getting to know Erica and the lovely community she's cultivating at her blog.  This month I joined them re-reading one of the foundational books of my life, The Art of Homemaking by Edith Schaeffer.  You can read some of what Mrs. Schaeffer has inspired in my own life in a few of my previous posts:

"Substitute damn every time you're inclined to write very; your editor will delete it and the writing will be just as it should be." - Mark Twain

| 7 | A Look at the Painstaking, Intricate Art of Globemaking at Citylab &  A Visit Inside One of the Only Hand-crafted Globe Studios In the World at This Is Colossal

Globes are beautiful, don't you think?  I didn't realize that only a few artisanal globemakers left in the world. If money were no object I'd buy one each from Bellerby & Co.'s collections.  See for yourself...

Hoping for a good and contented weekend for us all, friends.