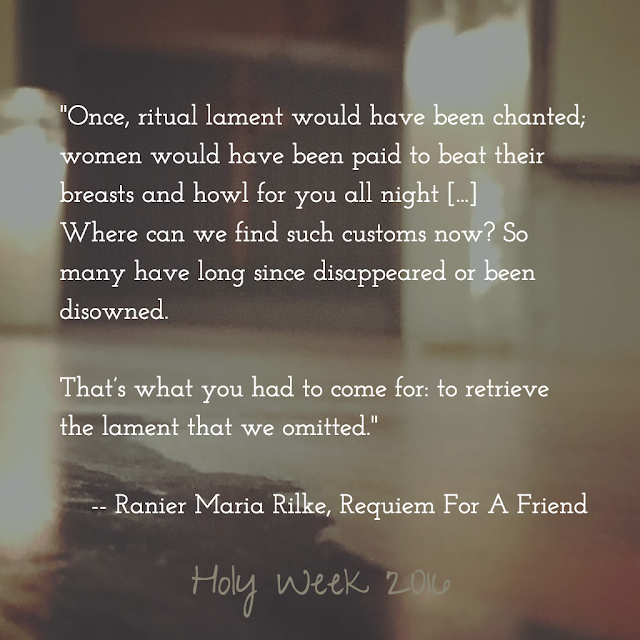 Each year during Holy Week, I ask friends to share a mourning story from their own life as a way to help us see Christ in the midst of suffering. My husband Brian tells today's story. For twenty-five years I've been lucky enough to walk with him in his journey to become more like Christ and more like his true self. One of the things I love most about him is the way he pursues and savors friendship.  I've learned so much from him about the vulnerability it takes to keep loving people - even after loss.  I hope you will be encouraged, too.

I have said too many goodbyes for my liking. Too many people who were important to me have died. Too many friend and family relationships are carried along over too far a distance. Goodbyes feel like lament to me. Lament over something that I have never really experienced in full, but long to know deeply, richly.


We moved to Austin almost five years ago. We left the hometown where we were born, met, married, made friends, and lived in beautiful closeness to almost all of our family, grandparents, parents, siblings, cousins, aunts and uncles. Most of our drives for Thanksgiving dinner, family celebrations, and ad hoc backyard bonfires were less than 28 minutes. Now most are over 28 hours.

When I think about friendships in Austin, I always think of two of my first Texas friends: Trey Sellstrom and Dick Chote. Before we barely knew each other, these men joined me in serving other men who were walking through emotional, sexual, or relational wounds and brokenness. Together we prayed regularly for men to be healed and made whole.

You need good friends when you walk with people through their most tender and hard places. Trey, Dick, and I became good friends, brothers really.

“Passed away”, “entered into their rest” we pastors say, but death doesn’t feel so kind. It felt to me like they were torn away, here one day and gone the next -- figuratively and literally.

Shortly after we arrived in Austin, Trey and Cheryl, Dick and Eleanor, and Tamara and I attended an eight-day training in Kansas City. The request went something like this, “Trey and Cheryl, I’d like you to travel to a place you’ve never been with a guy you’ve barely met to help start a ministry that you’ve never heard of. What do you think?”

The Sellstroms and the Chotes came with us to Kansas City.

One night at the training, I asked Trey if he’d like to take a ride with me to the local convenience store. He asked if he could get Cheryl. I got Tamara, and we all piled into a car like four freedom-drunk teenagers sneaking out after curfew. We laughed until we cried, got lost several times and became friends. I’ll never forget that night for two reasons.

It was the first time that I saw how much Trey loved Cheryl. He knew that we were about to have a memorable moment, and he wanted to share it with her.

The second thing is that when I was new to Austin – lonely, unsure and in desperate need of some friends - Trey jumped on a plane, flew to Kansas City, and became my friend.

For two years Trey and I enjoyed life together.  We played poker, prayed, and worried over our kids together. I was supposed to play golf with Trey on a Monday. He had a heart attack on the Saturday before that, and I said goodbye for the last time in his hospital room on a Friday night one week later.

Dick was older than me. He had recently retired when he and Eleanor came to Kansas City with us. I have many fond memories of Dick from that week. The most vivid is, after Tamara had prayed through a particularly shameful wound, she returned to her seat, weeping. I was praying with people on the other side of the room but had noticed that she was in pain, and I felt trapped and unable to help. I glanced around the room to see where she had gone, and saw that that Dick and Eleanor were ministering to Tamara.  They embraced her, extending the sort of tenderness and kindness that is like salve to a sore. In that moment, we knew we had become family.

The other memory is of all of us - Trey and Cheryl and their daughters, Dick and Eleanor, Tamara and me – floating down the Blanco River on inner tubes. We had so much fun, laughing as we twisted and turned through June sunlight. Dick looked so young and full of life.

A couple of months later, Dick told us he had cancer. We were gathered together in the church office after another evening of listening and praying together for wounded and broken people.  Looking back, sometimes it feels ironic, that while we were praying together for people to come back to life - emotionally and spiritually - Dick was actually dying, physically.

Dick continued to help lead those small groups of wounded men up until a few months before he died.  I’ll never forget the night the people he had been praying for became the ones praying for Dick.  He stood in the center of the room, while men and women placed their hands on his shoulders and his head, now bald from chemo.  We had hoped he would be healed, but instead he died.

It’s not easy for us pastors, especially me, to make close friends. Trey and Dick always encouraged me to be myself. They had no trouble respecting and loving me as a pastor, a brother, and a friend. I’ll always love them for it.

I have often reminded people who have lost loved ones that we are lucky to have had any time with them. I suppose that’s true at some level, but sometimes I wonder. Sometimes it feels like the pain of losing people to death is greater than the joy of friendship, and it’s tempting to guard our hearts from loving again.

Tamara and I are preparing to move once more this summer. It’s a trade - closer to friends and family in one place at the expense of the nearness of family and friends in another.  I wish I didn’t have to choose between one group or the other. I long for an existence when space, time, and death are barriers no more.

I long for resurrection life.

My consolation while I wait is that Jesus understands our loneliness and homesickness and grief. He left his home, became humble unto death, and felt the sting of abandonment in order to prepare a place for us where space, death, and time will no longer be barriers to life. He is preparing a place where I will not only spend forever in closeness to him, but also to all my family and friends.

In a few weeks I will be ordained as a Priest in the Anglican Church. I wish Trey and Dick could see this in person. They prayed regularly for me, encouraged me, and blessed me with words that affirmed my calling and purpose. All of the friends I have made at Christ Church have been instrumental in my ordination process. The parish has prayed for me, discerned with me, and celebrated each step of the journey towards ordination. My new friends in Connecticut at Church of the Apostles have prayed for me, blessed me with kindness, and have honored me by inviting me to serve alongside them as their Rector.

This is also my consolation.

Because of the love we share together in Christ our earthly goodbyes, although painful and hard, also bring with them the reality of a joy that is already here, even though not-yet perfect. We're learning that the sadness of goodbyes is consoled by the happiness of meeting new friends. Friends like Dick and Trey. Friends like those I have made at Christ Church and in Austin. And friends like those I have and will continue to make at Church of the Apostles and in the neighborhoods of Fairfield, Bridgeport, Trumbull and beyond.

Even so, come quickly, Lord Jesus.  Reconcile all that separates us; restore all the time that has been lost.  Bind us together in spirit until the new heaven and new earth makes every broken circle whole again. 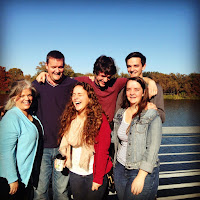 Brian moved from New York to Austin in 2011 to join Christ Church of Austin as Executive Pastor. In May he will be ordained as a priest within the Anglican Church of North America, and will become the Rector at Church of the Apostles in Fairfield, CT. In the meantime, Brian enjoys every good thing that Austin has to offer.

(See all of the Retrieve Lament stories from previous years here)
at 1:58 PM