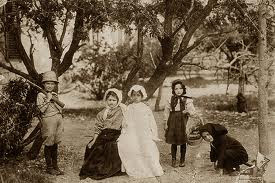 Maybe I was nine years old? Ten? Whatever the age, I felt much older and wiser -- at least 60 or 32.  In my mind, something needed to be done about the creative culture of our extended family. Ten of us cousins snarled up together at every church meeting, every family celebration, every summer picnic.  Some might have seen the perfect opportunity for legendary whiffle ball tournaments, starry-night manhunt sessions.  Not I.  I saw the ideal set-up for creative productions.

We had manpower and we had skills.  Obsessively, I cataloged our gifts -- James, Jack and Jeremy* could build stuff.  Jeff liked to do magic tricks.  Tim told jokes.  Karen and Mandy could sing.  And do acrobatic tricks.  Kimberly was, at that time, the adorable baby of us all. A true cherub, haloed in the sweetest, palest yellow ringlets of hair.

I was the oldest girl in this mess of cousins.  I figured my birthright was to inspire the youngsters toward creative greatness.  If we could make a couple of bucks while we were at it, even better. And, so, we gathered after church services, sitting around a wobbly aluminum table in the  church basement kitchen. While parents shuffled metal chairs and small talk on the floor above our heads, we dreamed and we schemed. In my memory, it seems our grandiose-est dream was to pull off a family circus.  A real live three-ring affair -- magic tricks, acrobats, matching costumes, live animals.  Surely Grandpa would allow us to use his back yard?  And Grandma would provide popcorn for free and let us charge people for it?

It was an audacious dream. We loved to talk about it every possible moment.  At least I loved to talk about it; naturally, I assumed they loved to listen.  The only thing I liked better than discussing plans for our future glory was the hours absorbed scribbling to-do lists in my orange-covered spiral notebook: talk to James about pet tricks.  get joke book from the library.  find somewhere to buy tickets.

In retrospect, I'm not entirely certain what everyone else was thinking, so enthralled was I with the Grand Idea.  Now I realize they were probably thinking, "When's this meeting gonna be over so we can go outside and play whiffle ball?"

Eventually the Family Circus idea morphed into a Family Musical idea.  Smaller scale -- Grandma's living room.  We'd act out parts and lip-sync to the vinyl melodies spinning on my grandparents' record player.  We -- or was it I? -- selected the crowd favorite for all good little church families in my day:  Bullfrogs & Butterflies

The big day came. Probably after a birthday dinner; maybe it was Thanksgiving, half-time of the football games playing on both upstairs and downstairs television sets.  To this day, I'm not sure how I ever wangled all those burly boy cousins to dramatize music spitting from the fuzzy brown stereo speakers perched behind Grandma's orange recliner rocker.  But I did and they did.

In fact, everything was running smoothly. Our parents crammed onto the living room furniture, leaving a small pathway of brown carpet for us to make our distinguished entrances through the kitchen doorway onto our stage, indicated by small empty space in front of the brown cabinet television in the corner of room. My long-imagined dreams of pulling off a creative enterprise with this troupe of little relatives was about to come off without a hitch.  Sure, we didn't charge for tickets or publicize in the family newsletter that I slaved over on a plastic blue typewriter in my walk-in bedroom closet.  Nor did we publicize in the local newspaper or the church bulletin as we'd planned for the Family Circus.  But, we were all together making art happen. And it was good.

Good, that is, until the well-planned, and certainly well-directed, Grand Finale of Cuteness from the littlest cousin.  The darling with the blonde ringlets was to enter the room on all fours as the littlest bug from the spectacle of critters being acted out that day -- frogs, butterflies, caterpillars, snails.  Kimberly was to play the littlest snail.  Waiting for her entrance from my place behind Grandma's rocker, my entire body tingled with desire, imagining the consummation of this final scene..  I pictured the adorable entrance, the oohs and aahs of the adults, who would surely be overcome with waves of emotion at the sheer genius of this director.  What style!  What substance!  What depths of passion and heights of spiritual ecstasy wrought from this  musical score.  Hand trembling on the phonograph needle ready to descend onto the spinning sphere, I held my breath, watching the kitchen door, certain that all the inspired instruction I'd given the actors backstage was being carried out to the final detail.

The door did not open. My ears puzzled at the sounds of hissed commotion going on backstage.  What could possibly be happening back there?  All our plans!  All our meetings!  All my lists scratched on notebook page left no room for backstage commotion.

At some point, the door did open. As I remember it, my hand was still poised over the whirling disc and I began to drop the needle, sighing relief as I did.  Smiling to myself, I even imagined the story we'd have to laugh about over cake and ice cream later -- about the moment that almost wrecked the whole show.  And how the bonds of family held us together through thick and thin to keep the show on track.

Through a crack in the door, I think it was the Garanimal-striped arm of a middle-age cousin that pushed the little diva out onto the carpet.  And, to this day, I have experienced no greater shock than when I realized this truth: Kimberly was not adorably nervous with stage fright as I had assumed.  My internal response to this truth lit a short fuse of fury and indignation that not even the darkest hours of crisis in all my 39 years since have overshadowed. in 39 years, no recognition more jarring than that moment when I realized the  darling was MAD! Her eyes were red not with tears of fear, rather, of plain old stubborn disgust that she had to be in this stupid show at all.

If I'm remembering correctly, I began wheezing instructions to her from my hidden seat in the corner.  A battle of wills ensued between oldest girl cousin and littlest girl cousin.  Nothing mattered.  She sat on her tiny haunches, unmoved by my pleas.  Eventually, the show broke up.  Uncle picked up the stubborn little snail who was by this point bawling tears of anger, whisked her backstage into the kitchen, flushing out the rest of the cast and crew waiting ears pressed up to the other side of the kitchen door.  Awkward moments lapsed while I sat, stupefied, behind Grandma's chair.  Aunts and uncles began to lift their polite theatre voices to regular conversation.  Boy cousins began digging through the closet for jackets, caps, ballgloves.  The spell of my imagined perspicacity with this undiscovered troupe of artists had been shattered.  My dreams of assembling  familial brilliance, my ground-breaking innovation, unnoticed.  Uncle still arguing with baby cousin in the kitchen, trying to persuade at least an apology.
That was the moment I think I gave up my dreams of artistic camaraderie and decided to like boys instead.

And that is a whole other story.


*names have been changed to protect the innocent.  Even Kimberly, whom I forgave a long time ago, and whom I still believe to be adorable.

Linking up with Emily at Imperfect Prose
and with L.L.