7 Quick Takes: Why Having Kids Shouldn't Make You Happy and other blog links, daughters making us proud, autumn in Texas and more!

--- 1 ---
Last week I forgot to mention here my latest article published at Think Christian:  Why Having Kids Shouldn't Make You Happy.  Six hundred words were not nearly enough to address the subject; hopefully, I made a little bit a thought-provoking dent in the conversation.

--- 2 ---
Speaking of words on parenting, I'm taking a two-week hiatus from the Parenting Unrehearsed blog series because of back-to-back speaking commitments.  I've made a tab on my home page with all the posts in the series so far.

Want to hear the speaking topics I'm working on for a ministry group in our church?

1.  The four forms of abuse that children face (with a focus on sexual abuse)
2.  Narcissism and Relational Idolatry

Timeless: A Review of WaterSky - the album by Jeff Johnson and Phil Keaggy at Hieropraxis: Kevin Belmonte writes a thoughtful review of an album I posted in the last Monday Mixtape.

The Life and Times of an Indie Filmmaker at Diary of an Arts Pastor:  Two Monday Mixtapes ago I encouraged you to get behind the indie film project Dragon Day.  This past week, the ever-inquisitive, always-affirming David Taylor interviews the filmmaker and producer Jeffrey Travis on his work and life as an artist, father, Christian.  It's a good interview.  I'm especially thankful to David and Jeffrey for giving us insight into ways we can support the work -- and the artist -- through prayer.


--- 4 ---
Last weekend marked Kendra's debut choir event at McCallum.  Her fan club gave her EIGHTEEEN THUMBS UP and assured ourselves she carried the night.

Seriously, we're proud of her and nothing makes me smile bigger than watching my kids doing what they love.

We laugh around here at one of Brian's mantras, "We Murphys are a slow people."  Natalie laughed at that quote when she told us her overall standing; still, she beat her personal record by 4 seconds.  In Olympics numbers that's big news!

--- 6 ---
Brian and I enjoyed the gift of a little quiet retreat in Wimberley.  I'm not sure what it says about us that while the rest of Austin is crowd-surfing ACL festival venues, we're sitting on a riverbank staring at rain drops land on water.  All I know is that we loved every minute.


--- 7 ---
Wish I could have taken photos of every single patch of wildflowers we saw this weekend.  Who says autumn in Texas isn't pretty? 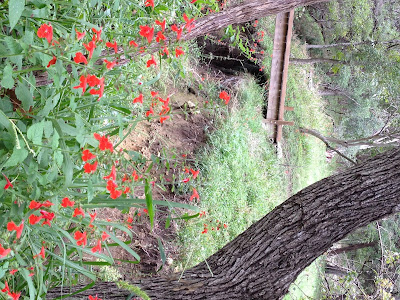 p.s., if you've ever considered joining Jen's 7 Quick Takes blog community, this is a good week to start.  She's entering each participant in a $50 Amazon gift card giveaway. Deadline's Monday!