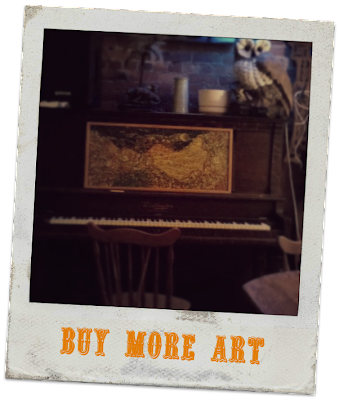 There are few things in the world I get more excited about than imaginative, risk-taking, art makers sharing their work.

Each week, usually on Monday, I compile a metaphorical mixtape, a few "tracks" of art featuring the work of independent artists making good work.  (with an occasional pop artist thrown in for kicks)

Won't you consider this weekly post my little patched together gift to you.  Hopefully, it makes the artists I'm crushing a little bit of happy, too.

p.s., this mixtape is meant to be shared; help a starving artist and pass it on!

On the heels of taking home two Grammys for producing Barton Hollow with The Civil Wars, Charlie Peacock releases his ninth solo album and first vocal recording in thirteen years.


from the Paste album-streaming page:


Peacock refers to No Man’s Land as the “culmination of a lifetime of making music” that reaches deep into the roots of American music to garner its sound. An homage of sorts, the album is rich with memoirs of the past in the forms of pedal steel guitars and horn sections throughout.

No Man’s Land was recorded at Peacock’s home studio, The Art House, a restored hundred-year-old church in Nashville, Tennessee. Undoubtedly, this environment put its own stamp on the record. Peacock finds it fitting to record an album in a church having always been a “God-haunted” man.

Stream the album at Paste

I've had the pleasure of meeting Charlie and his beautiful wife Andi Ashworth , retreating together on the banks of the Frio River at Laity Lodge.  There are few artists I respect more than these two.  They have walked the long, arduous road of making in the framework of discipline, integrity, excellence, hospitality, theology and grace.  In my opinion, artists are starved for the sort of wisdom they offer; not only artists, but Christians as well.

May all the seeds they've planted in the dark turn into harvests of hearty, excellent fruit bursting out in the light.  In the meantime, let's raise a glass to No Man's Land!


If my calculations are correct, this post makes the number of times I've crushed on Phaedra's work an even dozen.  I'll probably do it again because I just can't help myself.  (plus, she just keeps on making new work!)

Alongside The Ambrosium (which I raved about here), Phaedra has added a second shop to  her up-and-coming Etsy empire: PJeanArtMachine.  She's filling her shop with "art prints, whimsical cards, block prints and other sundries" -- the sort of things that make you so happy to look at you want to look at them every day.

In addition to the print above, I'm especially excited about her vintage Christmas cards.  If you happen to be on the Murphy family mailing list, cross your fingers that one of them will show up in your mailbox this December.

from their Facebook page:  "Dragon Day is an independent feature film about an American family fighting to survive a Chinese cyberattack against the U.S.!"

The final product of the movie depends on the help of patrons.  The film producers have kicked off 1 $50,000 campaign for post-production expenses through IndieGoGo.com.  Visit their campaign page to watch the trailer, meet the filmmakers, hear their vision for the film and make your contribution.

from David Taylor: "If you ever wanted Christians to succeed as filmmakers in Hollywood, then I encourage you to support my friend Jeffrey Travis and his latest project."

from Jeffrey Travis (writer, director & producer of independent feature film Dragon Day) :
"I've put my blood, sweat and tears (and my modest savings) to bring this movie to life. Depsite our small budget, I'm proud of what we accomplished, and I don't want to compromise the final quality of the film in post-production, and so decided to turn to you, our potential audience, for help in finishing this movie.."

For myself, I'm intrigued (and somewhat haunted) by the premise of the national debt making us vulnerable to attack.  I'm looking forward to this movie and totally grateful I get to play a (small) part in its production.

Dragon Day at IndieGoGo (only 12 days left to contribute!)

Before I go, I should tell you that I love to hear what poems, pictures,
songs and reasonable words you are enjoying.