I asked my son, Andrew, to tell us what he's been learning the past nine months since standing on his own two feet stepping into Austin's celebrated stand-up comedy scene.

Like every other time he's written for us here, he raised the bar for my own writing in this space. Thank you, Andrew!  (p.s. You make me proud)

8 lessons from 9 months doing stand up in Austin, TX 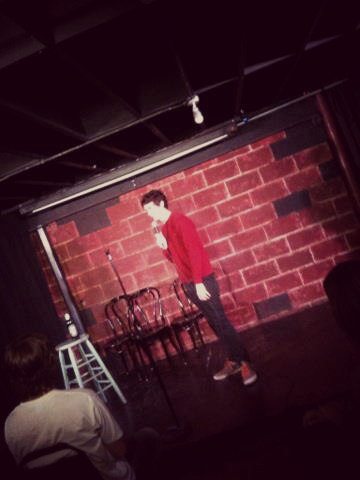 Before I list some lessons, let me preface them by saying I didn’t make these up on my own. All these lessons were gathered from my original skewed stance on how comedy works, and if more seasoned comedians didn’t put me in my place and share some wisdom, I wouldn’t have grown at all in the last 9 months. Also, this is a poorly written article. It’s hard for me to be subjective when I’m writing about my favorite thing, but hopefully some of this still resonates with you. Thanks for reading and thanks to my parents for seeing my passion and engaging me in discussion.

8. Never Expect Anything
I’ve probably done over 150 open mics and shows at this point, and there’s never a day when I don’t leave my house—my material rehearsed and prepared, amped up on caffeine and short on sleep—that I don’t have lofty expectations for how awesome my set is gonna go over and how full and excited the audience will be. Then, right before I go on stage, there’s never been a moment when I haven’t instantly dreaded doing comedy and contemplated quitting or pulling the fire alarm right before I go on. It’s in these moments that it’s important to remember to abandon expectations and control only what I can control. Have confidence in your jokes, take a deep breath and remember that you’re doing something you love…

7. “The Audience Is Never Wrong.” Eh, sure they are.
…But say the audience isn’t full and/or excited. Maybe I’m doing an open mic in a coffee shop where most of the people are sitting at back tables and doing homework. Or maybe it’s in a dingy bar where the patrons have wandered in from the street, ready to interrupt. I have to be careful to remember that if my set doesn’t go well, I can’t scapegoat the people for not laughing. This will give me false confidence and stunt my growth as a performer. However, “the audience is never wrong,” is a dangerous motto to have. That sort of excuses heckling and crowds with a strong taste for racist jokes. At the very least they may just not be listening. They are human beings after all. In situations like that, I’ve started to shrug off a bad set and assess what I could do differently, while not molding into whatever that particular audience needs me to be. It’s a delicate balance.

6. It’s not okay to be offensive. However, no topic is off limits. And “Too Soon” is a crock of malarkey.
- There’s nothing okay about making mean-spirited cracks about recent tragedies. There’s also no proper way to make cracks about darker subjects like abuse, sexual assault or civilian casualties. However, once you can acknowledge that such topics involve layers and layers of complexity, there’s still a way to inspire laughs out of the darkness. I’m in the often polarized camp that believes a comedian has the ability to joke about anything. At the same time, unless you acknowledge the effect that topic has on people, and the history involved with tragedy, you probably shouldn’t joke about that topic. Most “offensive” comics are the ones who have been around for years and years. The reason they approach dark material is because, frankly, they know how to delicately construct a joke. Until I learn that skill set, I won't dig myself a hole.

5. Networking is important, but friendships matter most.
- Networking is very important. When the industry folks and bookers are around, find a genuine way to show your face and get your name out there. But once you start sacrificing friendships with other comics to achieve that, you’ll become miserable and your love of what you do will diminish in the process. I need to work on this goal more than any other. I’m doing the thing I love, so the idea of not having companions who love the same thing sounds like it could lead to depression and isolation. The comics I hang out with now may not have a ton of opportunities at the moment, but when they do, they’re going to share them with the people who matter most to them. Just being funny and funny alone will not assure me much of anything in the scene.

4. You are going to bomb. That bad news is, that’s not such a bad thing.
- The first mic I ever did actually went very well. What I failed to realize at the time was that most of the laughs I was getting were coming from other comics who knew it was my first set, and were frankly just being generous. However, I still had the thought that I would NEVER BOMB. That’s actually a goal I had for about a week until I did my next open mic and failed miserably. No one in the history of comedy has never tanked. The good news is, it’s not always a bad thing. In fact, it’s one of the only ways to learn and grow as a comic. The sad truth to stand-up is that you don’t really learn anything from a good set. It’s more of a celebration of what you’ve gathered through bombing so many times. Once you get over the lie that bombing is the worst thing that can ever happen, accept that it happens to everyone, pull up your pants and move on to the next set, all of a sudden taking risks on stage will be less daunting. Bombing always feels crappy, but you’ll go farther as a comic if you remember that it’s not the end of the world. In fact, if you lose your fear of tanking and get over your aversion to silence, trying new material will become more and more of a natural process.

3. Boredom is contagious
- Recently I did the same exact set that I did in the Funniest Person in Austin contest at a packed open mic. The same jokes that convinced the judges to put me in the top 3 performers of the night and advance me to the semi-finals. They tanked. All of them. I tend to forget that every show yields new audience members who don’t know who you are, and have no expectations for what your material will be like. That’s why the best comedians in Austin are the ones who walk on stage and perform years-old jokes like it’s the first time they've ever done them. Simply reciting your successful material will not assure a good response. If you’re bored with your jokes, even on a subconscious level, your boredom will spread like a virus. Audience members are not dumb people. They go to shows not only expecting comedy, but ingenuity and charisma. If they catch a scent of running-through-the-motions, they will not courtesy laugh for the sake of your feelings.

2. Stop pretending you’d be doing anything cooler if you weren't doing this.
- This seems like a pretty self-explanatory tip, but it’s the rule I struggle with the most any time I’m compelled to stay home and not hit up an open mic. Comedy is not a marriage. If you wanna quit, quit. Picture yourself as the hobbits, and you’re not even halfway to Mordor yet. There’s still time to go back to The Shire, but unless you’re willing to do that, get as much stage time as possible. This means Coffee houses, biker bars, stages with poor lighting, and even furniture stores. Yes, furniture stores. Nobody ever got successful from comedy by only doing TV spots. Comedy may not always be glamorous, but neither is staying home and ordering Dominoes pizza online. Netflix streaming will always be there when you get home. But for the moment, it’s important to gain humility and be above nothing. I may sound like a broken record, but realize you’re doing your favorite thing, and try and enjoy where you are. Disclaimer: I know doing comedy in a pizza restaurant sucks, but…who cares. Which brings me to my last point.

1.    Patience
- Working hard in comedy and sucking at comedy are essentially 2 sides of the same coin. As Bill Burr--successful Boston-raised comic--puts it (paraphrased) “You’re gonna suck at first. You just gotta keep doing it until all the suck is gone.” As bleak as that idea may first appear, it’s an extremely liberating goal to work with. Basically, there’s no deadline to becoming a great comic. I’ve learned a lot about this field since I started, but I’m almost a year in (that’s one year of basically non-stop performing and writing) and I’m just now becoming a decent comic. And I’m totally okay with that. I’m 21. If it’s true that it takes “seven years to find your voice,” then I’ll be 28 by that point. There’s a possibility I can be a confident performer before I even turn 30. And even if you’re around that age when you start, comedy is not age-specific. Successful, touring comedians like Lewis Black and Louis C.K. didn't even really build a name for themselves until they were in their 40’s. Since comedy isn't sexy, there’s not necessarily a strong demand for “young, hot talent.” 10 years and 100 pounds from now, I can still be successful. And besides all of the logistical reasons behind patience, If you like doing something, it’s simply worth waiting for. In the years to come, I’ll go through adulthood, accumulate experiences and milestones, and ultimately become as good of an interpreter as I am a recorder. If I’m asked to write another article just like this in, say, 3 years, I may backtrack on everything I've written here, but I’ll still be the same person. And that’s what a lot of this boils down to. Comedy is about becoming better at being yourself.