homeschool daybook (everything from Argentinian classical guitar to slapstick comedy in Pawnee, Indiana)

Nat was out of commission yesterday with a sinus cold so we're packing in a lot today and tomorrow to finish out our first week in the Great Homeschool Experiment.

She started the day back in the Gospel of Matthew, chapters 5 & 6.  Then she read some of the introduction to Evidence That Demands a Verdict.  I think we're just going to skip right into chapter 1 tomorrow.  I know Mortimer Adler would disapprove, but let's just not tell him, OK?

More history outlining from Kingfisher Encyclopedia of History.  She's learning how to write a three-level outline.  Brian revised hers from the first day so she could see it modelled.  She's already getting the hang of this skill really well!

We skipped out in the middle of the day to drive downtown for a free classical guitar concert performed by Michael Anthony Nigro at Central Presbyterian Church.  Nigro played two suites of rich Argentinian melodies:  the first, Suite del Plata No. 1, composed by Maximo Diego Pujol (b. 1957) and the second, Suite del Recuerdo, by Jorge Cardoso (b. 1949) and Jose' Luis Merlin (b. 1952). 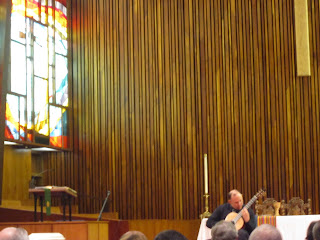 Some tunes were soulful and others playful, but all of it beautiful.  Watching him play the entire length and width of the guitar's neck and body was the added bonus of attending a live performance.  You can listen to the music here, watch a video of a performance here,  or buy your own CD here. 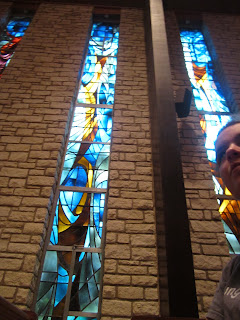 Once were back home, Natalie read two more chapters in Uncle Tom's Cabin.  She's learning how to navigate the dialect Harriet Beecher Stowe writes for her characters.  This is not easy, but great learning.

To end the day, Natalie wrote her first composition this week. She chose a writing prompt (I collect them from here):  Talk About One of Your Favorite Television Comedies.  Natalie loved this assignment and did a great job.  I've copied her review at the end of this post.  Without any direction to do so, it was fun to hear a semi-critique/review come out of her work.  Andrew helped her correct some of her grammar and punctuation and I gave her a few tips on style, but this is her work.  I'd say if you've never watched Parks & Recreation, Natalie's given you a pretty good synopsis of the show!

The funniest show on TV these days

There are many shows on TV this year that I believe are truly hilarious. Shows such as Modern Family, 30 Rock and The Office are definitely in the running for the title of the most outstanding comedy of 2011. However, in my opinion there is one show that out does them all, Parks and Recreation. Parks and Recreation is a show that runs second on the Thursday night NBC comedy line up and is airing its fourth season this Fall. ‘Parks and Rec’ is being rated as a series that will go down in history as a comedic classic.

Ex- Saturday Night Live cast member, Amy Poehler, stars in the show about a local government parks and recreation department in the small town of Pawnee, Indiana. Poehler’s character, Leslie Knope, is an over-achieving, workaholic who’s never ending loyalty to her job and collogues makes her down right loveable. Leslie works with people just as crazy and funny as herself, people like Tom Haverford (Aziz Ansari) the small, egotistic, Jay-Z-wanna-be that just can’t seem to win anything in life. Another of Knope’s Co-Workers is Ron Swanson (Nick Offerman) the carnivorous libertarian who always seems to show up at the right moment. Then of course there is feisty Donna (Retta), unrecognized Jerry (Jim O’heir), contemptuous April (Aubrey Plaza) and her boyfriend; Sweet, naïve Andy (Chris Pratt).

While the show mostly features Leslie’s office life, her job also requires her to spend time out and about in the town of Pawnee. During her adventures in the fictional community, which is ranked the fourth most obese town in America, she comes across several other characters that are charming and hysterical. There is Leslie’s best friend Ann (Rashida Jones) the cute, level-headed nurse that helps Leslie with the struggles of local government and brings a touch of sanity to the outrageous town. There is also  Jean-Ralphio, the slightly sexist entrepreneur the mentors Tom through crazy schemes of money making and picking up chicks.

Throughout all of Pawnee’s events and shenanigans the rustic town becomes bankrupt, causing the Indiana government to call in two financial professionals, Chris Traeger (Rob Lowe) and Ben Wyatt (Adam Scott). Chris Traeger is an eco-friendly, health nut that obsesses over optimism and fiber. Chris ends up dating Ann and eventually dumps her, so kindly in fact that she didn’t even notice the end of their relationship. While Ann’s relationship with Chris began going in confusing directions, Leslie’s love life took a turn for the better. Ben Wyatt-- the charming and nerdy executive-- catches Leslie’s eye by being nearly as loyal and genuine as Leslie is.

Parks and Recreation is a crazy, loveable, laugh-until-you-pee-a-little comedy that deserves credit as one of the funniest shows on television this Fall. The shows head writers, Greg Daniels and Michael Schur, created a series that I believe will stick with TV fanatics for years to come. You won’t be able to stop following the story of Leslie Knope and her all-too-real town of Pawnee, Indiana.

[through the magic of the world-wide web, I took the liberty to make Natalie's review "multi-media"...enjoy!]