We started the day with individual devotional reading in Matthew, chapters 3 and 4.  Afterwards we talked about some of the key people and places in the chapters, used a concordance to look up Old Testament verses involving Bethlehem, read from the Bible dictionary about Bethlehem and looked online at a map of  Bethlehem.  We imagined for a moment the trek the Holy Family took to Egypt.  We also looked online at some modern-day photos of the Church of the Nativity in Bethlehem.

We read the preface to Evidence that Demands a Verdict, Josh McDowell's story of searching to disprove Christianity that led him, instead, discovering Jesus to be the Son of God.

We looked for the first time at our primary history textbook: The Kingfisher History Encyclopedia.  Natalie read through the double-page spread describing the era of slavery and the people and conflicts that led to abolition.  She wrote an outline in her history notebook (her first time to write an outline!) and created a page for William Wilberforce in the "Great Men and Women" section.

For literature, Natalie read chapters 1 and 2 from Uncle Tom's Cabin by Harriet Beecher Stowe.  As she read,  I asked her to consider why this book is considered both a great work of literature but very controversial at the same time.  She also wrote down in her Grammar notebook any words she needed to learn the definition.

After lunch (she got hungry a whole hour earlier than I anticipated!) she spent some time on her own reading The Hobbit (her choice).   We then did some Grammar work (4 types of sentences) and Math work (algabraic expression).

To end the day, we read together from nineteenth-century writer and naturalist Susan Fenimore Cooper's journal, The Rural Hours, for October 3 and 4.  We discussed the value of noticing the natural world:  as an act of worship, as a way to keep natural, healthy rhythms rather than following the retail and commercial rhythms forced upon us.  We opened a small moleskine journal she'll keep for her own observations in nature.  We both agree this might feel kind of awkward at first; hopefully, this will become more natural soon.  Right now it feels like she'll only be able to write the following:  "dead grass in the backyard"  and "scorpions in the bathroom".

Natalie then read the double-page spread in her (really, really fun!) Eyewitness science book, Time and Space.  As a demonstration of the ways time and space work together, she made cupcakes.  I'm trying to remember how those two things go together, but I think it had something to do with the fact that even though she could move herself physically from the room while the cupcakes were baking, there was nothing she could do to rearrange the cupcake mix once it got into the oven.  As if it were planned, she forgot to put the cupcakes into the paper muffin cups and didn't realize it until the cupcakes were happily rising, naked,  in the oven.

Ah, yes -- the limits of time and space. 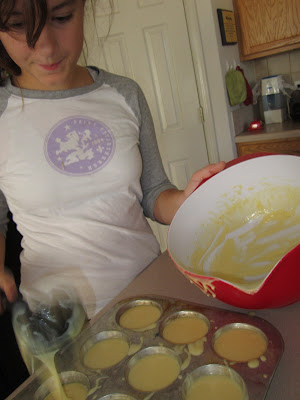