Retrieve Lament: Annie Crawford (Today you will be with me in Paradise.)


Each year during Holy Week I ask friends to share a "mourning story" from their own life as a way to help us see Christ in the midst of suffering.  Each story reflects on one phrase of Jesus' dying words.  My friend Annie told this story last year at Christ Church's Good Friday service and graciously agreed to tell it again here with us.  She shares not only a story of deep relational suffering but also a stunning offer of life and hope.  The same suffering-bourne grace offered to the dying, believing thief is strong and good enough to rescue us all.

Just after I turned 5, my parents divorced. I remember my mom weeping as she told me. In the blink of an eye, Dad left for Alaska and my older half brother and sister moved away too. Life went on, but the world became lonely, unsafe place, one I seemed to view as through a glass. Innocence and trust had shattered, and consequently, for many years, I struggled to maintain intimate friendships. It is fairly impossible to feel known and close to someone when the core of your heart is cloistered away for safekeeping.


About a year before my dad left, my younger sister was born. She was a cherub of a child with enormous blue eyes. I have always simply adored her. To me, she is delightfully unique: sensitive, whimsical, exceptionally bright, and absolutely hilarious. Growing up, she seemed to understand me more clearly than anyone else. After all, we had the exact same parents, curly hair and skinny ankles. My sister was the only person I dared to love freely again after dad left.


However, the nightmare began when she was about 14. In high school, she began drinking and inaugurated a severe eating disorder. By the time she was 22, her losing battle with bulimia took a cruel turn: she discovered the world of crystal meth and heroin. I have seen a 90 pound sister so strung out on drugs that she couldn’t look me in the eyes and I could barely recognize her. I have seen photos of her in the Oregon hospital, nearly beaten to death by her latest user boyfriend. I have visited her on street corners and in jail and in prison. At least when she was incarcerated, I didn’t worry that the phone call coming in from mom was to tell me that she was missing again or had finally OD or had been killed in drug-related violence.
It’s now been 18 years of constant, nearly unrelenting family crisis. Addiction has not pulled our family closer together.


Loneliness and grief have been my long-time companions. Sometimes the loneliness has seemed so visceral and so vast that I lost hope of ever feeling any other way. And in the loneliness, I have felt such an open-ended grief. Sometimes, I was ashamed to pray that my sister would just go ahead and die so our hell would be over. It feels as though she has suffered a dozen deaths, and that I am trapped inside the grief cycle, never able to escape because there is no closure, no hope, no end. To think of her utterly strung out, sleeping who knows where, vulnerable to who knows whom; it has felt like a dying breath drawn out for months and sometimes years at a time.

Last November, at 2pm on a Monday while driving down MoPac, I received a text from my mom saying, “There is now an official murder investigation out for your sister with the police. We can’t find her anywhere.” However, a few days later she turned up alive and went to jail. It had been a year since I had communicated with her at all, but upon receiving the news of her incarceration, I sent her a letter. I soon received a response expressing her gratitude that I was still willing to speak to her after yet another year of hellish failure. This was my reply:

Not more than two weeks ago, mom texted me that she thought you were murdered. The flood of grief was terrible, crushing. So when I later received your letter, it was a letter of resurrection to me. So many years and parts of my life are alive again, because you are alive again.

Who else knows the cherry and maple trees we used to climb, my silly goose wallpaper, the pony Christmas parties, my Eugene apartment, and the way I used to eat Nancy's non-fat yogurt? Who else has witnessed both my childhood and my confused college years, both my misguided passions and the revival at Cannon Beach? You see both the messy and the sweet in them all and love me anyway. You know all these parts of my life that no one else can really know, for telling someone about things is not the same as living through them together.

It’s been a long 18 years and my heart feels as if it has been jerked around like a flag inside a tornado. Still I have come to be thankful for this hard journey, for in the great chasm of loneliness I have discovered the God who is always there.

In Luke 23, it is recorded: “One of the criminals who were hanged there [with Jesus] was hurling abuse at Him, saying, “Are You not the Christ? Save Yourself and us!” But the other answered, and rebuking him said, “Do you not even fear God, since you are under the same sentence of condemnation? And we indeed are suffering justly, for we are receiving what we deserve for our deeds; but this man has done nothing wrong.” And he was saying, “Jesus, remember me when You come in Your kingdom!” And He said to him, “Truly I say to you, today you shall be with Me in Paradise.”

This next season in prison may initiate a miraculous and permanent sobriety in my sister, but it is also possible that she may never overcome her addiction. Yet she knows who Jesus is, and like the second thief, I have heard her confess the justice of her predicament, even while trapped on the cross of addiction and failure. The thief on the cross never managed to practice walking a sanctified crime-free life before he died, and yet he is among the first to see Christ’s eternal kingdom. It is the glorious offense and power of the crucified Christ, that though my sister may never be freed on this earth, she can cry out to Jesus and hear him say, “Today, dearest, you will be with Me in Paradise!”

This has been my saving hope for my sister through the darkest hours as well as a lifeline for me. Christ’s promise to the thief is also for me.  I have been the first thief who cried, “Are you not the Christ? Than save yourself and my sister!” Instead, the suffering Christ has tamed my heart and shown me that he is the God who suffers with me, with my sister. He has taught me to walk through the cross instead of looking for a way around it. It is through the cross that we enter into the “Today” of eternal life, whether with Christ here or in heaven.

To live is Christ and to die is gain. In the eye of this storm, the nearness of Jesus has become my strength and my song. It is for the joy of his presence that I submit to the fellowship of His sufferings. It is a joy that can come even in the "Today" of dark Friday. 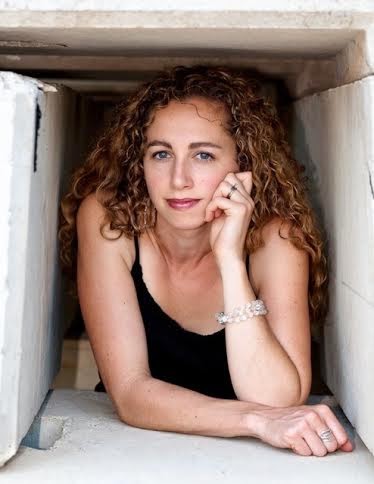 Annie is a vocalist, homemaker and teacher who lives in Austin with her husband, Tommy, and three beautiful daughters. She enjoys homeschooling her girls and learning with them about our great God, this wondrous world, and Christ's great redeeming love.

Jesus gave us a litany of last words as a Sufferer; we refer to them as the Seven Last Words of christ. The deathbed words of the Suffering Servant provide a framework for the stories o lament we share here this Holy Week.