12 Days of Christmas: my favorite cultivators and creators in 2008

If there is a constructive way forward for Christians in the midst of our broken but also beautiful cultures, it will require us to recover these two biblical postures of cultivation and creation.
-- Andy Crouch, Culture Making: Recovering Our Creative Calling I will never in my entire life get over the thrill of the creative process. I wrote a little bit about the power this thrill has over me here. This project, A Terminal Christmas, has included just about every single element every great creative endeavor could include -- plenty of time for brainstorming, several difficult constraints (including a low budget, lack of an experience and plenty of skeptics) and tons of ingenuity, perseverance and arduous teamwork.


About a year ago the staff at Union Center Christian Church asked us to consider the statement "I hate Christmas." To consider the kinds of people who may be feeling that way at Christmas and the what some of the reasons behind those feelings may be. They asked us to brainstorm a way to put these thoughts and feelings into a story that we could experience as a community.


Every project needs a conceptual launching pad to begin shooting toward images that flesh out the concept. I Hate Christmas was that concept. Next we began talking about form. We knew drama was the direction we wanted to head. And, with this bah-humbuggy sort of statement, who wouldn't think A Christmas Carol? And, sure we could have gone that direction. After all, we knew that was a favorite story of our senior pastor. And, we knew we had the experience and talents of a good director in Jason Hill.


But in this stage of the process we began thinking about resources. What was at our disposal? What ideas had been lurking underneath the surface of previous projects? This is where Jason and Sarah Hill's commitment to the project became a driving factor. They have the ability to write scripts. Would they consider writing this project? And, if so, what kind of story would we want them to tell?


Within a few conversations we knew we wanted to include a strong musical component. We knew we had several strong possibilities of actors who could sing and singers who could act. Sarah felt strongly that she'd like to write the music. Here, Margaret Smith's expertise became crucial to the project. As a vocal director and an experienced actor and director of musical theatre, we needed her buy-in to the production.


So where were we now? (keep in mind, this is about April 2008) We knew we wanted to produce an original musical that told a story relating to the concept "I hate Christmas." We knew we had a director, script writers, music compser and vocal director. I thought that was plenty. I was wrong.


Each decision opens up a whole new world of possibilities and problems. In my ignorance I felt that the vehicle of a musical was pretty narrow -- simple to determine. I mean I'd seen The Music Man and Fiddler on the Roof. I'd watched Westside Story and Mary Poppins. What more was there to know?


And this is where it got interesting. We began naming musicals that could serve as an influence for this project and not one of those titles I'd mentioned even came up. Instead names like Moulin Rouge and Once and ... Buffy the Vampire Slayer?


We quickly scheduled a movie marathon at the Hills' home to get to the bottom of this idea. By the end of the night, as we lay around on their huge comfy sectional and cuddled with their fat cats and laughed at the antics of their adorable toddler, Simon, it was decided. The musical influence for Union Center Christian Church's 2008 production would be -- ta da -- Buffy the Vampire Slayer!!


And this is exactly what I love about the creative process. It takes the most unsuspected random components, throws them together, adds hard work, lots of feedback and clear direction and churns out a brand new creation. Something that never existed before now exists in all of its newborn vulnerability and glory.


To drag on that metaphor a little bit longer, this production has felt an awful like a full-term pregnancy. We began talking in April and it's now December (well that's almost full-term). Every stage along the way has brought with it new joys and challenges. We auditioned the cast and ensemble in June and for six months they have spent hours and hours and hours rehearsing, memorizing, and blocking. In September, a carpentry crew began drawing and sawing and painting and hammering a set to match the design an area set designer drew for us. About that same time the crew expanded to include cookie-bakers and coffee-makers and costume-sewers and graphic-designers and audio-mixers.


And this is the hardest work of all. Enabling every new volunteer to bring their full expertise and energy to the project while staying in line with the original concept. Protecting the story. Encouraging excllence.


And, perhaps, what has drawn me most into this particular project is the absolute certainty that no one could do this alone. I mean, have you ever watched a group of actors figure out how to get food when they are starving? Or how to actually find a prop that represents what they've been imaging for months? This is where Debbie McCoy's commitment to the project as producer was crucial. Well, this and about one million, three-hundred-thousand and fifty-two other reasons. Her attention to detail and compassion for people kept the production schedule moving forward month after month and deadline after deadline.


The perfect example for this brand of teamwork is the sub-project of getting each of the ten original songs in the show from Sarah's mind into the hands of the vocalists and musicians who needed to perform the songs. Sarah could write and record the melody through fancy music software, but that is not enough. Songs have different personalities. How does that personality remain the same as the notation on the screen changes hands from composer to arranger to performer?


I'll tell you how. Teamwork. Conversation. Feedback. Tedious, repetitious, hair-pulling hard work, that's how. This is where Neil Allen stepped in. His labor and commitment to the task made this possible. Without him, the show couldn't have happened.


The same is true for Brandon and Bethany and Brenda and Garry and MacKenzie and Joel and Suzanne and....


And the show is good. We are blessed with hard-working, intelligent and resourceful volunteers, but we are not perfect. We're actually a pretty rag-tag group. The team is made up people who are suffering all of the ordinary - and some, extraordinary -- stresses of life. Most of us have at least thought to ourselves a couple of times that, goshdarnit, we hate Christmas, too! But when I sat in the back of the sanctuary at 11:39 last night and listened to the final note of the final song of the final scene in our final rehearsal I am quite certain I was in a holy place. I am certain that our Maker was pleased.


Our goal in this project was to grow in our skill while at the same time grow up together. I hope those things are true. And, tonight, the last crucial part of the team will show up. It's the audience. Without the chance to tell them tell them the story -- to breathe and inflect and gesture and emote every last nuance of the story -- there is no birth. No baby to show for all the months of waiting and hours of labor. 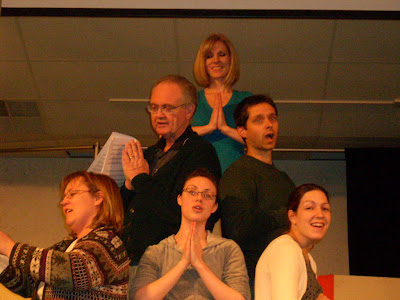 One of many music rehearsals of the title song, I Hate Christmas. 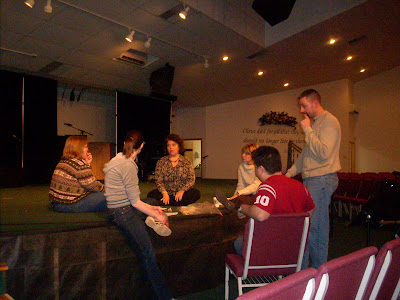 The brainstorming never ends. This session happened at the end of four hours of rehearsal. 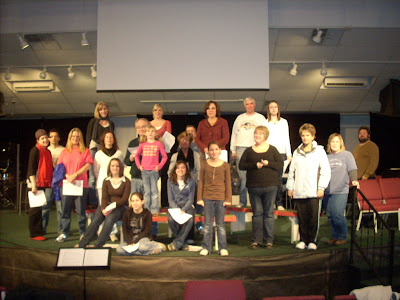 The cast and ensemble rehearsing the show finale Happy Ending. 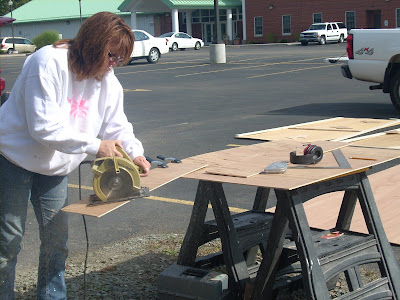 Nancy Gesel using power tools like a pro to bring a set into existence. (in September!) 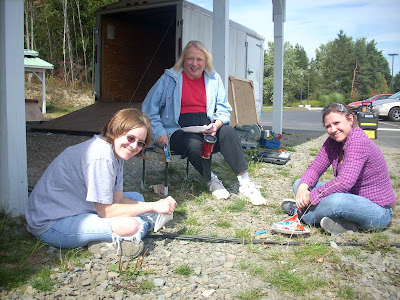 Miranda, Barb and Hope taking a break from building set.
at 11:34 AM