12 Days of Christmas: My Favorite Creators and Cultivators in 2008

If there is a constructive way forward for Christians in the midst of our broken but also beautiful cultures, it will require us to recover these two biblical postures of cultivation and creation

This site has never tried to be a mommy-blog. And while I've been thinking through the list of names I'd share during this series of my favorite creators and cultivators in 2008 I did think of my family. Several times. But I was a little bit nervous that it would be kind of like cheating. Like I'd set the whole thing up to just brag on my kids. And, worse, it might run the risk of not truly affirming their hard work of creating and cultivating this year. You know how it is, compliments seem so much more weighty when someone else gives them to you. Your mom is supposed to say nice things about you, right?

But I couldn't get around it. When I thought through the qualities I was recognizing for favorites -- discipline, risk-taking, excellence of results, and my own interaction with the work -- these five names kept coming back to me. See for yourself... 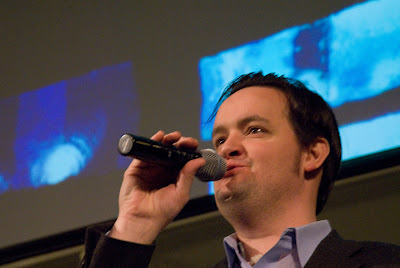 He'd be the first to tell you. He's not an artist. But, ahem, you'll notice this series does not celebrate artists in its most strict definition -- those who study and work at making artworks. It celebrates creators and cultivators. Stewards of culture -- the sphere in which they exist and experience life on a daily basis.

And creators and cultivators are marked by their difference from those individuals who have gotten paralyzed into bent-over postures from the repeated, single-motion gestures of merely condemning culture, copying culture, critiquing culture or consuming culture. As described so brilliantly by Andy Crouch in the book that inspired these posts:

What was missing, I've come to believe, were the two postures that are most characteristically biblical -- the two postures that have been least explored by Christians in the last century. They are found at the very beginning of the human story, according to Genesis: like our first parents, we are to be creators and cultivators. Or to put it more poetically, we are artists and gardners. ... after the contemplation, the artist and the gardener both adopt a posture of purposeful work. They bring their creativity and effort to their calling. ... They are acting in the image of One who spoke a world into being and stooped down to form creatures from the dust. They are creaturely creators, tending and shaping the world that original Creator made.

One of the greatest leadership lessons I've learned from my husband is about leading in context. It's about knowing the people you live with. Your context is your family, your neighborhood, your company, your school, your church. Just about anyone can enter a cultural sphere with grand ideas of what could be, but it takes an excllent leader to discern what should be. I have watched my husband stretch himself - at times to the point of near breaking -- to be this kind of excellent leader at Union Center Christian Church.

His job title is Executive Administrator -- meaning he shores up the pastors and support staff by providing the kind of nuts and bolts decision-making needed to keep ministry happening. One might consider this job to employ only black and white, no-nonsese, just-get-'er-done kind of thinking. One would be wrong. And Brian would be the first to tell you that he entered this job thinking too far on that side of the spectrum as well. What he has learned is that his job is more an art than a science. And I would agree. And, in that sense, he earns my respect as one of my favorite creators and cultivators in 2008.

In addition to making decision after decision depending on wisdom and discernment as much, if not more than, precedent and policy he has had the opportunity to develop himself in the craft of sermon preparation and delivery. In the early days of the job, he joked that he had three sermons in his queu and once they were done he'd have to start back at the beginning and keep rotating through. Over a year's time or so, those three sermons came and went with appreciation from the congregation. His natural ability to speak to a room, to tell a story, to deliver a point clearly made an impact.

But since that time, he has had the opportunity (and directive) to prepare several more messages. I have had the unique privilege to watch him do the sweaty labor of preparing those talks. To go beyond his experience and what was comfortable. To dig into topics from a fresh perspective and with the aid of the historical Christian writers. And, mostly, to depend well on Christ and his leadership community for guidance and push-back. It has been my joy to watch him lead in the context he has been given and at the same time call his church family up -- to thinking, understanding, worshipping and obeying Father, Son and Spirit. All the while paying heed not only to the biblical truths being spoken but also to the finer points of the craft of delivering that truth in an excellent method.

You can hear a couple of Brian's talks here, here and here. 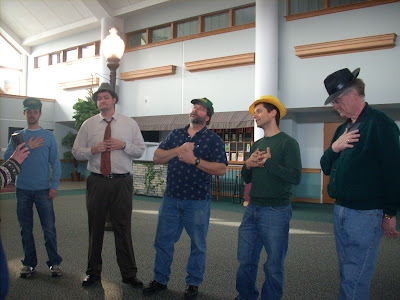 Oh, yeah, and two thumbs up to Brian for stepping wayyy out of his comfort zone with a barbershop quartet performance for our Christmas musical, A Terminal Christmas. (this was just a practice session)

If you've done any research on any well-known bands -- from the Beatles to Crosby, Stills, Nash and Young (now you see Young, now you don't) -- you know that keeping a group of performing artists together in one unit year after year, project after project, is rare. Now consider the gazillions of teenage boys who have saved up lawn-mowing money for amps and clean out the corner of their dad's garage for a place to practice with their buddy who owns a drum set and their other buddy who's got a bass rig. What's the life span for your average garage band?

I'm guessing Dot Rama has pretty much blown up that average. For several years these highschool juniors (plus one freshman) have been hanging out to play around with melodies, guitar effects, song lyrics and show ideas. They have spent countless hours recording their tunes with the lead guitarist's big brother. They have played in freezing cold fire houses in front of a dozen people and in sticky heat in jam-packed (and smelly!) community centers. They've never had a top billing. Never sold an album. But they keep playing. Practicing. Writing. Arguing through creative differences. Experimenting with sound and personality and music style. They have no grandiose plans for their future as a band. But I believe they have learned as much about the hard work of artistry than most adult artist-hopefuls I've met. At the same time I believe they've learned as much about what it means to be an artist community -- a team of rivals, if you will -- than any adult community I know.

For their tenacity, humility and creativity I choose Dot Rama -- Andrew, Alex, Tyler and Jeremy -- as one of my favorite creators of 2008.

Creating and Cultivating in a New Culture: Andrew, Alex, Kendra and Natalie Murphy

Last May we moved from a very small town with a very small school district to a very small city with a much larger school district. It has been a hard change for our fifth, seventh, ninth and eleventh grader. They had spent their whole lives in a district where everyone knows everyone. A sort of cocoon, if you will. We're very thankful for those years.

This district is probably three times larger. Now the kids have to be intentional to make their mark. To use and develop their talents. It's not a given. And Brian and I couldn't be prouder that one by one each of them is pushing past their fears and insecurities in order to participate fully in the culture that is Union-Endicott School District. While the specific experience and achievements are special, it's the character-building that we hope they will take with them for their lifetime. To audition for the highschool musical for the first time ever in front of a room full of experienced muscial veterans. To attend percussion lessons with only one other student and a teacher that is unknown and sort of odd. To continue in honors classes when the academic mark is much higher than ever before. To audition and make the show choir without any prompting from us. These are things that I am not sure I would have had the courage to do when I was in school -- or now.

I believe God is gracing Andrew, Alex, Kendra and Natalie to do things they did not know they could do in an environment in which they are not comfortable. And it's been one of the hardest things I've ever had to watch as a mother. And, probably the most beautiful.

For their courage, tenacity and excellence I have chosen my four children as favorite creators and cultivators in 2008. (And give thanks for the many, many people who surround our children with prayer, affirmation and community.) 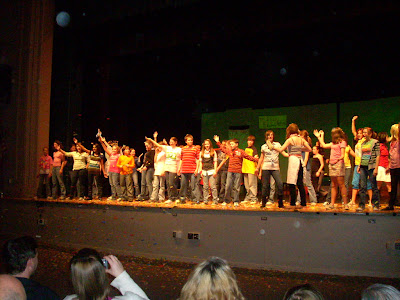 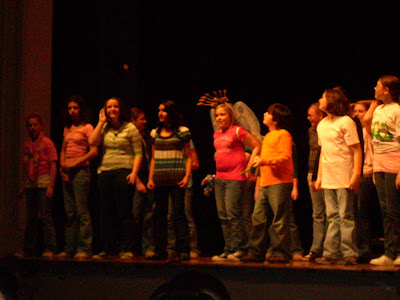 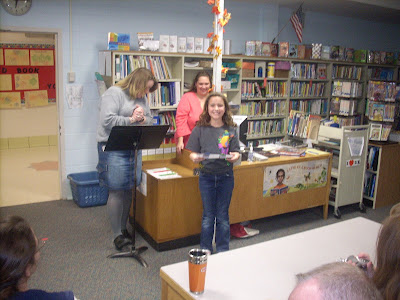 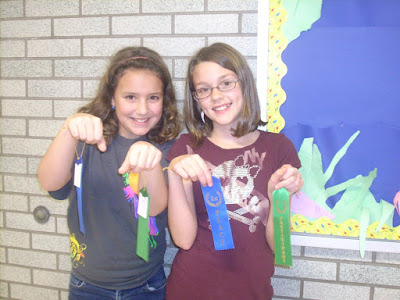 Natalie wrote a creative writing essay about a Wow! moment in her life for an optional program with the PTA. She came very close to not submitting the work after several computer glitches caused her to have to re-write. She was rewarded with a first place ribbon for her creative writing about our evacuation from the flood in 2006. 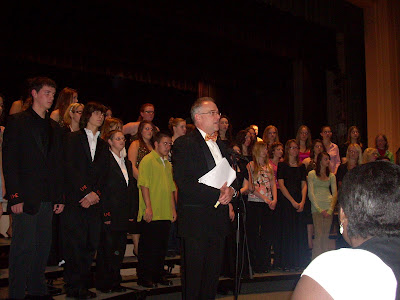 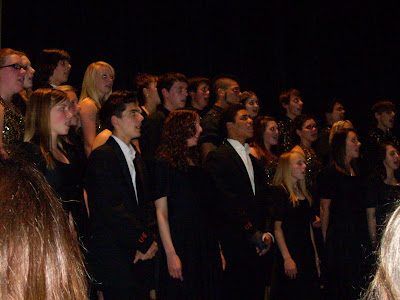 Andrew was a late auditioner for the high school chorale. He is stretched with the level of the work this group peforms. We look forward to seeing him in his role in Oklahoma! in April.