12 Days of Christmas: my favorite creators and cultivators in 2008

If there is a constructive way forward for Christians in the midst of our broken but also beautiful cultures, it will require us to recover these two biblical postures of cultivation and creation. -- Andy Crouch, Culture Making: Recovering Our Creative Calling

Days 2, 3 & 4: David and Phaedra Taylor and the Transforming Culture Symposium 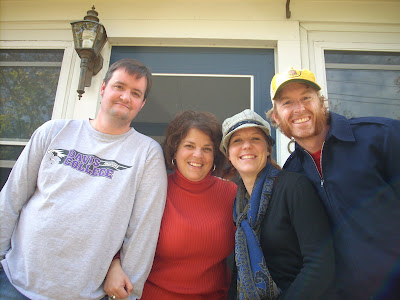 I began reading David's blog in 2006 when I was browsing the internet for help to produce an art show at our church. I found Hope Chapel in Austin, TX where David was the arts pastor. That site was a tangible lifeline to this amateur arts director. At first I was just looking for how-to's and logistical advice, but soon I discovered there were theological and liturgical perspectives of which I was completely ignorant. This led me to David's blog and I am not embarrassed to say I read every word.

Who knows how these things happen? It's not like there aren't gazillions of other blogs and book titles on this trinity of art and faith and culture. And I have read several. But there was something about the combination of intelligence and faith and humility; of respect for the Church's grand history, discernment for the Church's place in the present and sacrifice for the Church's future generations that set Taylor apart. Although I hadn't been studying for long I had already become disillusioned by so many short-sighted and shallow church "arts ministries". I discovered David Taylor's writings at the right time and I have no doubt to whom my truest gratitude is owed. (hint -- it's NOT David...)

But this year -- 2008 -- was a banner year. The leadership at Union Center approved several of us to attend the Transforming Culture Symposium that David Taylor co-founded in April. And then invited David and his wife Phaedra to visit us during the Art Show on Main in October. I confess I might have been a little bit nervous to get to know the Taylor's on a more personal level. In my life I've had far more opportunities to discover that leaders I've respected from a distance do not have much maturtity, humility, or even kindness at their foundation. And, while it would be foolish to say that I truly know the Taylors now, I do believe their lives match their words. And that is saying a lot.

As creators and cultivators David and Phaedra merge their talents and passions beautifully. [It's a good thing, too, since they are married afterall!] David's tagline at his blog describes him as an arts pastor who never wanted to be a pastor and never thought he could be an artist. And, although he has left his official post as an arts pastor to a local congregation he has not laid aside his calling to pastor artists. There is no question that his true heart is pastoral and it spills out in every conversation I've ever had with him. He is currently editing the plenary content of the Transforming Culture Symposium for a book to be published by Baker Books. He and his wife are making plans for him to do his Ph.D. work and then move back to Texas to establish an arts center in Austin.

Phaedra's work as a visual artist is the kind of work that I could only describe as beguiling. I mean that in the most charming of senses. She employs layers of whimsy and childlike wonder with poignancy, elegance and even sadness in her prints, paintings, drawings and sculptures. She is a skilled craftsmen with deep insight. And discipline. And it shows. I hope to own some of her work someday. In the meantime I enjoy your her stories of living artfully one day at a time at her blog.

Both David and Phaedra model what it is to be a disciple artist. May God continue to establish the work of their hands. And may we not just be distant observers of their work, but co-laborers with them in our own communities and callings.

I've blogged a lot of the content of the Symposium here, here, here, here, here and here. But there are a few details I don't think I've mentioned. For example, have I told you how lovely church campus was or the deep and rich the liturgical worship experience? (I had never even heard of St. Patrick's Breastplate let alone sung it!) I also am certain I haven't mentioned that I sat about six feet away from poet Luci Shaw during her breakout session. As she read her work to us, tears ran and ran and ran down my cheeks. I couldn't help myself. It was beautiful and moving and felt like a totally ordinary response to her extraordinary use of language.

I also will never, ever forget Eugene Peterson. It was not so much as what he said (although he is a master storyteller and quite convincing in his exhortation!) It was more the essence of wisdom and age and humility that he brought to an event full of great thinkers and artists. How often he answered a deep question from an attender, pleading for help with a kind of sighed "I don't know." The first time we heard him answer this we laughed. We realized soon that his heart was pure in the simple statement "I am wary of big solutions." How very, very, very refreshing! And someday I will blog a whole post about my deepest epiphany of the entire event that was sparked by this half-chuckle and half-proclamation from Peterson, "We're just so damn ordinary." How refreshing indeed.

Some pictures from the Taylor's visit: 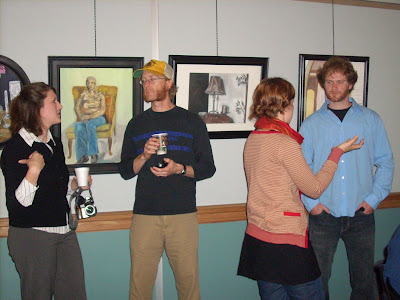 David and Phaedra mixing it up with Union Center artists during Coffeehouse on Main. 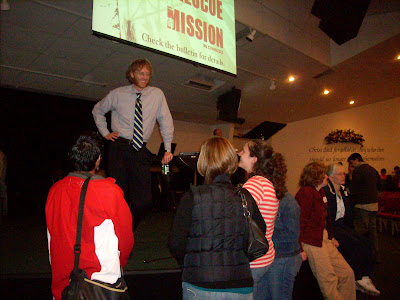 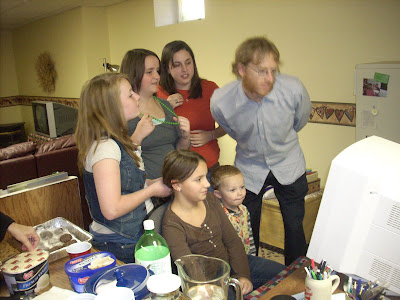 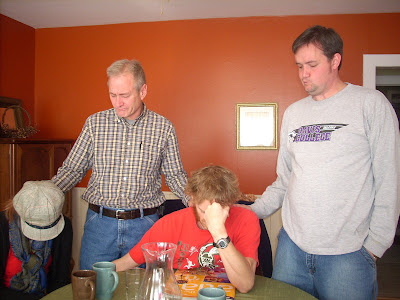 Pastor John and Brian pray over David and Phaedra after brunch our final morning together.
at 10:01 AM