Tuesday is for Nesting: hospitality of confession 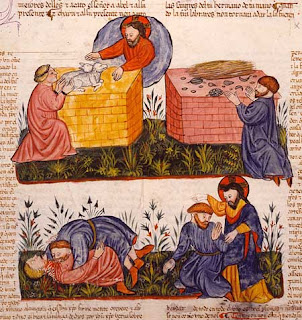 Reading the account of history's first murder in Genesis 4 today.  Struck by the metaphor that God uses, telling Cain that "sin is lying in wait for you, ready to pounce".  As if sin were a mugger waiting around the corner while we stroll midnight streets, eyes glazed over from staring into our mobile device, oblivious to anything in the world but our own interests and pursuits.

When we dropped our son in Washington, D.C. for the semester, the Capitol police told the kids to never travel alone and to always be alert when they were walking through the city.  That these were the two most certain ways to discourage the attention of would-be assailants.
And I think that I need to remember these cautions in my everyday, walking-about life.  Don't walk alone.  Pay attention. Sin is a thief ready to kill, steal and destroy.  Temptation is the bait to draw me in and most of the time, I'm pretty naive about the whole deal.  I need community and I need the discipline of confession.  I need the welcoming invitation to confess and to hear confession in community.  Certainly, Cain would have done well to tell his friends he felt mad enough to kill when his brother received God's favor and he didn't.  Instead he threw a tantrum, ignored God's safety warning and sulked himself headlong into committing history's first homicide.
I wrote about confession and community here a few times.  Unfortunately, not everyone appreciated what I wrote so I've had to remove some of my story.  There's still this post remaining. In the meantime, I confess to my welcoming circle of confessors so that I don't follow in the bloody tracks of my ancestor.
Lord, have mercy.  Christ, have mercy.  Lord, have mercy on me.
An ancestor to the season of Lent is the Jewish preparation for Passover.  Jewish families understood well the  power of lurking temptation.  Preparing for the yeast-free days of Passover, the whole family turned the house upside down, cleaning out every corner of every cupboard for even the tiniest crumb of temptation, literally.
Re-posting that learning next....
at 10:53 AM