Tuesday is for Nesting: a Passover repost for Lent 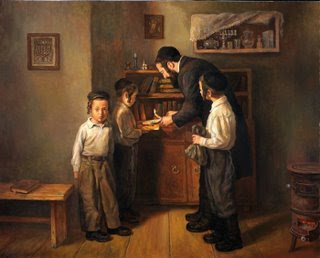 
On March 28 we held special prayer service at Union Center. The purpose for the evening was for all the Good Friday volunteers (and any others from our church family who wanted to join us) to learn together and pray together before we did tons and tons of work together. Messianic Rabbi Ron Goldberg taught us about the Jewish tradition of removing every speck of yeast from the house leading up to the first day of Passover.
In the Hebrew mind leaven represented the evil impulses of the heart. And these evil impulses can not just be pushed aside or ignored, they must be destroyed. He explained why yeast is such a perfect picture for this -- even a small amount of yeast grows and spreads through the whole mound of dough.
Yeast is also a perfect picture because it is so ordinary. Baking bread is such an ordinary activity. This is not only about getting rid of the capital-E evil offenses. It's about every little ordinary speck of evil that follows us around in our everyday, ordinary lives.
In the same way that the Hebrew housekeeper -- and then the whole family -- would take extreme measures to destroy or remove all yeast from their homes before Passover (even going so far as to temporarily sell whole vineyards and foodstuffs to Gentiles until after Passover) so, too, we must be diligent to destroy all evil impulses from our own lives.
Rabbi Goldberg did the thesaurus work for us. Destroy = remove, evacuate, evict, move, oust, purge, relocate, take away. And what can be harder to destroy than microscopic specks of yeast? The evil, hidden impulses inside of us. The unspoken thoughts, attitudes and behaviors that spread throughout us like specks of yeast multiplying in a rising lump of dough.
The Hebrew tradition, searching for chometz, is a family activity. Historically, it started with the housewife, as the main keeper of the home, but as the first day of Passover grew closer the whole family became involved hunting through every nook and cranny of the house to destroy every sign of yeast. Really, it is a community activity as each family unit is doing the same activity at the same time, holding each other accountable. The local rabbi acts as a sort of clearing house for yeast -- making temporary business transactions with neighborly Gentiles who are willing to hold onto bulk food items, vineyards, shop goods until the completion of Passover.

This picture of removing sin as a community event has captured my stunted, individualistic, evangelical imagination for a couple of years. It really started when I found myself in the place to make confessions in a small group setting. I had imagined this to be painful and risky and ostracizing. I was right on two counts, but not the third. I had guessed that when I brought into public truths about me -- sins committed against me and sins I had committed -- to form into words that crossed my lips for the first time ever in my life that these words would be held against me as accusations and condemnations.
I couldn't have been more wrong....
at 11:00 AM