“Slowly, and slower, you have learned to let yourselves grow strong while weaving through each other in strong cloth...


...how rare it is to be able to get into that kind of conversation with a friend that goes on for years and years and just continues  underneath everything...” -- Marge Piercy

A couple of months ago someone stole 60 pounds of luggage from the Austin airport.  It was our luggage. That giant suitcase held all of our favorite, most comfortable clothes, shoes, and personal items.  I've been wearing the same pair of summer jeans ever since because, well, we're too cheap to go out and replace all of our clothes in one mad shopping blitz.  I miss my clothes, but most of all, I miss my journal.  At the last minute I'd moved the hardcover book (the one my son and his girlfriend bought me for my last birthday) out of my carry-on and into the suitcase, figuring I wouldn't need it until I got back home.

The journal is what I miss most. Frankly, I'm quite terrified that someone in Austin may have read those scribbled pages!

Maybe that's the reason I dug out from under my bed the container that holds all the journals I've kept since the time I could begin writing.  The oldest is a little brown diary with a key that has been lost to time.  I've attempted to read through my journals before, but usually gave up the idea in disgust of my younger, angsty self -- as if my self is no longer writing angsty monologues in current journals.

This time -- whether motivated by a gentler maturity or just the softening of time -- I kept reading.  Just randomly, whatever book I happened to pick up next.  Turns out I landed smack in the middle of the worst era of my life.  The era where my words were more spiritual than Jesus to sugarcoat all the stupid I was doing, especially to my friends.  I call this era (other than "those years I was stupid") my mid-thirties crisis.  I was the worst kind of friend, treating precious women and men as commodities that could be traded or sold. (If you happen to be reading this and would consider yourself someone I've mistreated, please, please forgive me.)

I know now -- in the wisdom of Christ's tenderness -- that I was suffering my own deep wounds.  And that wounded people wound people.  I lived hell-bent on finding The Friend who would provide for me all that I was missing in every relationship of my life leading up to that point.  This primed the opportunity for codependency and relational idolatry.  I am ashamed (in the healthy sense of that word) of the way I treated people and myself during those years.

The reward for re-reading the pages documenting this horrible season of my life is the reminder of redemption that comes afterward.  It was a pretty stunning redemption.  In my humbled state, a few good women reached out to me and invited me to a real-life friendship that I did not deserve.

In the plotline of my friendship story, the moment I'd consider the climax takes place on a fairly stressful Sunday night after a really stressful church meeting.  I wouldn't probably remember any of these details if I hadn't written them word-for-word in a lipstick-red, spiral bound journal.  It's actually written as a flashback (so clever of me, eh?):

March 4, 2008 - "The third Tuesday since we started meeting with Gail 4 weeks ago that snow or ice is in the immediate forecast (meaning early dismissals for the kids) God, I am so thankful for the group of women meeting with Gail -- it's literally a dream come true for me.

Just for the sake of recall here, here's how you brought it about...

After the relationship implosion with [X], I had given up on a kind of regular get-together with women friends for serious conversation, prayer, accountability, advice, intimacy, etc. I believe now, Father, that time will likely end up being one of the most clear lessons You've ever brought me through. The desires were wired into me from birth, but all my sinful coping skills and unhealed wounds continued to skew the way I sought to meet those desires.

Anyway -- that bust-up meeting with [X & X] brought me to the absolute end. I gave up hope to ever see this need [for unconditional love in friendship] ever met in my lifetime.

That sounds unlike You, Father or at least what you'd want from me, but I think, ultimately, it became -- not a hopelessness, but a death to self-desire -- a surrender -- an acknowledgement that I was incapable of creating the correct scenario to meet this grasping desire in me. I stopped hunting for its potential in every conversation with women... I realized I was unable to make friendship happen just because I wanted it badly enough.

On Sunday, January 27, 2008 I was feeling as fragile as any other moment in my life. As I asked Abba that morning to speak to me the names and faces of connection, I sensed His voice whispering, "Today I want you to be cared for. Ask me to keep you aware of others who will care for you."

My first step of faith was believing He was actually speaking that to me. Throughout the morning I noticed several small moments of care being given -- a hug, a smile, a woman telling me she was praying for me earlier in the week.

Later, after a church meeting that went better than expected, I said good-bye to Lori and noticed her talking to Gail. This was good because I knew Lori had asked Gail to do some mentoring with her. A few moments later, Lori walked back over to me.

She began talking, "Gail and I are going to be meeting weekly for awhile." [I began my supportive, I'm-happy-for-you head nod]

"I believe I'm supposed to ask you to join us." [Sheer hilarity begins working its way up from my toes. I begin clapping and jumping up and down.]

This all happens while Lori continues to tell me details, "And Gail thinks she is supposed to invite Andrea." [And the joy just keeps on coming!]

And that my friends is the inauspicious beginning of one of the best gifts I've ever received in my entire life.  Soon after the initial gatherings, Margaret joined us, and we became a little company of friends. When we decided needed a name we wracked our once-creative-but-now-exhausted-by-childrearing-and-obeying-Jesus brains as M.A.L.T.  (for Margaret, Andrea, Lori and Tamara/aka, Tami, see?) 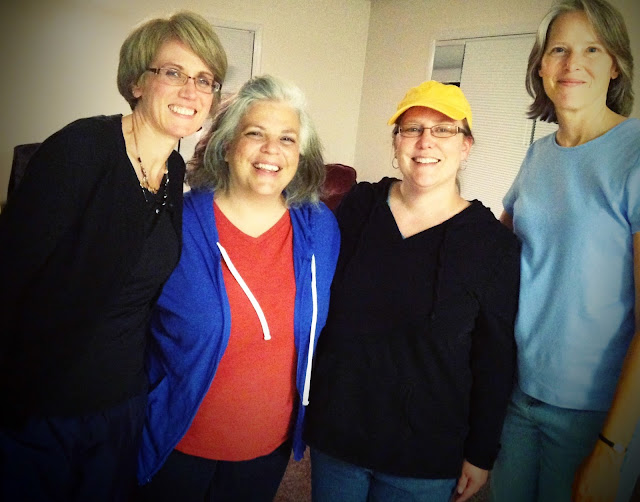 On the surface, there's a lot of reasons why this company should have disbanded a long time ago.  For one thing, we now live in New York, Texas and West Africa.  But guess what?  This little group of what you might call "average" women prayed and cried and complained and laughed so hard together so often, I think we might just have convinced God to send us off hither and yon.  So, who are we to disband?  Who are we to quit praying for each other and sharing the minute details of our family life and health issues?  We are a company of friends, formed out of pain (sometimes the sort we brought upon each other) and humble origins.

We encourage each other to love our husbands, love our kids, love all nations, love our neighborhoods and love ourselves.  We attend each other's shows, read each other's writing and listen to each other's music. We used to see each other several times a week, then a couple times a year, and now, a couple of times a decade because we can't just drop by Africa for a chicken salad sandwich and cup of coffee.

But there's email and Skype and Facebook, Father, Son and Spirit to hold us together.

Today is Andrea, our dear and quite neccessary vowel's, birthday.  She is far, far away - beyond even the technological magic of Skype.  She once wrote me a song with the line: "There's a piece of you written upon me."  In the Grand Reversal of Christ making all things new, I believe she means this in a good way.  Had I remained stupid, had these dear women given up hope on me or just plain decided loving me wasn't worth the risk, that lyric would mean something else entirely.

In the healing of my wounds, Christ has shown me the abundance of friendship that is available by grace.  I am blessed with an almost embarrassing number of dear friends, other men and women that show up in the pages of my journal from my childhood all the way to just last night, sitting over a glass of wine with a beautiful kindred woman.  This is the goodness of God, and more than I deserve.  It is also the nurturing of a little company of friends who held on to me when I was slipping fast away into a lonely, self-righteous life.

And none more than Andrea.  I could write out all of the ways she sat with me at my worst and cheered me at my best.  Instead, I'll share today -- in honor of her first birthday on a new continent -- the poem I wrote for her commissioning service a few years ago. 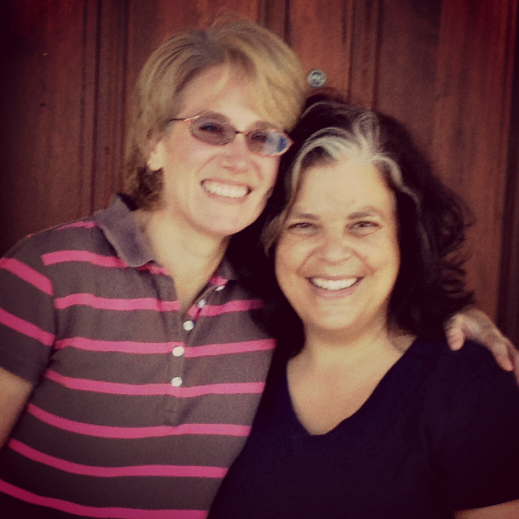 on the occasion of Craig and Andrea’s commissioning service, August 3, 2013

What will be served for our reunion
in the everlasting? Sugar-crusted muffins, of course, and coffee, trails of crumbs jewel a blue tablecloth.

This’ll last forever so we become who we
will be, world without
end. We make paper boats
of prayers and float them away.

The time my home nearly gone to smoke,
rising water from the Susquehanna,
the one day -- or was it too many to count --
I called you with a broken heart.

We sat witness to a room full of women (twice our age)
giving up lies we believed, then ate
chicken salad on your blue tablecloth.

I was with you for my mid-thirties crisis,
judgemental and acting like hell.
Wearing my false self like an overcoat,
with Christ hard to recognize.

We’d driven to Chicago squeezed
in a 15-passenger van, jars of nail polish
shared like a chalice,
hotel room sacrament.
The piano player made you want to be brave.

My favorite poem is song
scratched into your notebook.

We knew someone whose mother died.
Then we knew ourselves:
soprano, second-soprano,
alto, a deathbed hymn-sing.

All our conversations went to the children
who insisted on dining three times a day.

We got in trouble with too many friends
saying words we hoped we’d never hear.

Hands clasped in times of trouble.

A few song birds winged off
a piano key.

My friend’s becoming the bravest woman,
she sees nations in everything,
in missing her home,
in her son  dashing  for the goal line,
dashing all the way across the sea.

There’s my friend under a baobob tree
trying to determine if a song
is a living thing and how to give birth.

All that a human is made of is dust,
made blessed by the very breath of God.

There’s my friend, breathing blessing
from her dusty lungs.


I'll also include a sappy slide show, because I am the T and that is what I do. (click "Launch Gallery" to hear our theme song from the beautiful Sara Groves.)