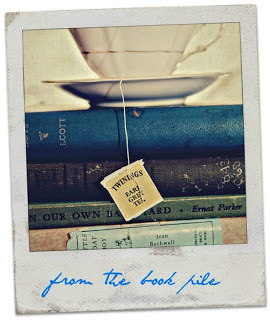 I've been reading along with Erica's hospitable reading group at Liturgy of Life.  From now until the end of the year, we're reading The Art of the Commonplace: The Agrarian Essays of Wendell Berry.  If you've read my blog for any amount of time, you probably know that I love the Mad Farmer (even when I argue with him).  I'm more familiar with his fiction and poetry, but I do own a book or two of his essays. Sometimes I find the essays harder to approach.  For one thing, they're a bit denser, harder to swallow and digest, like much writing from great thinkers.

I also will admit to a certain amount of despair. When I think along with Mr. Berry all the ways we've pillaged our land, ignored the dignity of man and beast, committed violence in the name of ownership, sometimes it's only the Gospel that makes me not want to just give up on our sorry American selves. Right about the time I start to slap the book closed and open up some easy reading, the author will remind me of life that comes from death, and the grace of small and simple things.

The first essay in The Art of Commonplace, whether or not intentionally, outlines the author's experience of place (common and otherwise) in the same framework of the Gospel - creation, fall, redemption, resurrection.  I considered the gospel template over the top of our own circumstances of the commonplace. 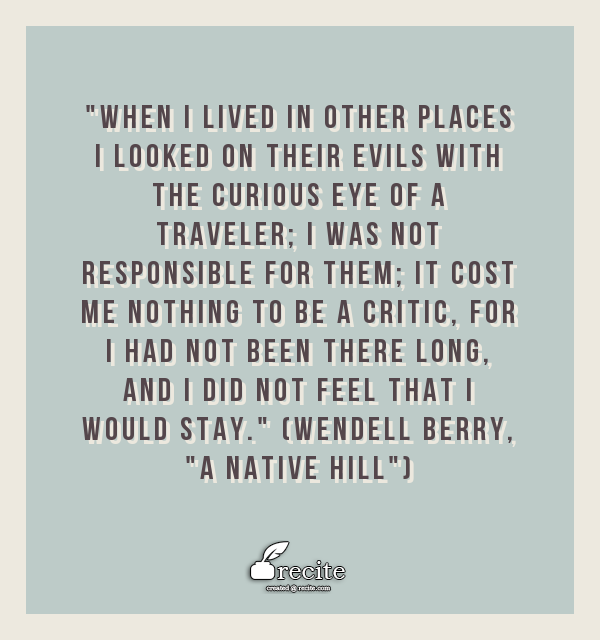 Anyone who's followed our life story these past five or so years is probably sick of hearing about the displacement our family experienced when Brian was laid off from his job back in 2010. It was not for cause in his abilities, but for reasons, both economic and cultural, rooted in the place in the place in which we lived.  The place we were born, educated, married, and became a family, rather suddenly, had no more use for us.  Of course, it wasn't that personal, but when you love a place and when your family has lived in and loved a place for many generations, it's hard to not take loss of work personally.

Yes, we could have struggled along with temporary jobs until Brian found the right fit and could go back to school to pursue his yet unrealized vocation.  But, instead, we got surprised by a new place, a city we'd never seriously considered (other than Natalie because she was watching Friday Night Lights at the time):  Austin, TX.  Not only a city with a job, but a community that needed what we had to offer and were able to pay us a salary and subsidize my husband's seminary degree.  You say yes to that, right?

In that transition of leaving one place and arriving at the next, we've had to figure out our role.  When we still call a city other than the one we live in home, we want to also establish our full selves in this new city.  We want to recognize the place for what it is so that, while we are native in one city and citizen of another, we are still considering the inheritance we will leave in all the places we've lived. 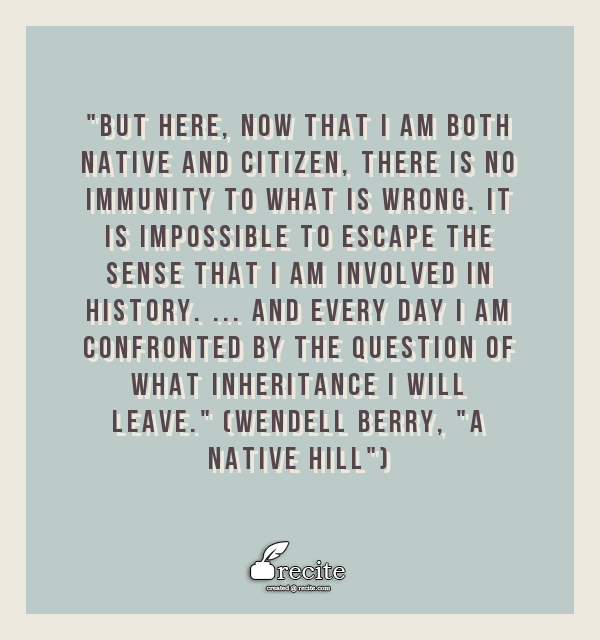 Mr. Berry talks quite a bit on this theme of arriving in the first essay of the book.   He contrasts the first inhabitants of the North American continent, as both natives and citizens of the land, to the modern-day American (starting with the first explorers) as merely travelers.  A native and citizen remains mindful of the continuity of past, present and future relationships between people and the earth.  A traveler is always in the present, always passing through and never actually arriving anywhere.  Where a native will cultivate a path out of habit and familiarity with his surroundings, a traveler -- in order for people to move through the area as quickly as possible -- will build roads whose very purposes are to resist, literally destroy, the landscape.

As chronic travelers, according to Berry, we Americans have yet to actually arrive to our place.

With a bit of encouragement and Gospel-oriented foresight, our family worked hard to become not just tourists of Austin, but citizens.  In its current heyday, something well over 100 people move into the city each day.  It's hard to be citizens in a city full of newcomers, sight-seers, and thrill-seekers.  And we've only been here four years.  I understand (even though I dislike) the bumper sticker slogan, "Welcome to Austin. Please don't move here."

Still, we're certainly grateful that Austin made room for us four years ago.  We've done our best to know and learn from a the few-and-far-between natives still living in the city.  They are not pretentious in the least (which is how you can tell the difference between the rest of the self-consciously hip horde claiming this city as their own). 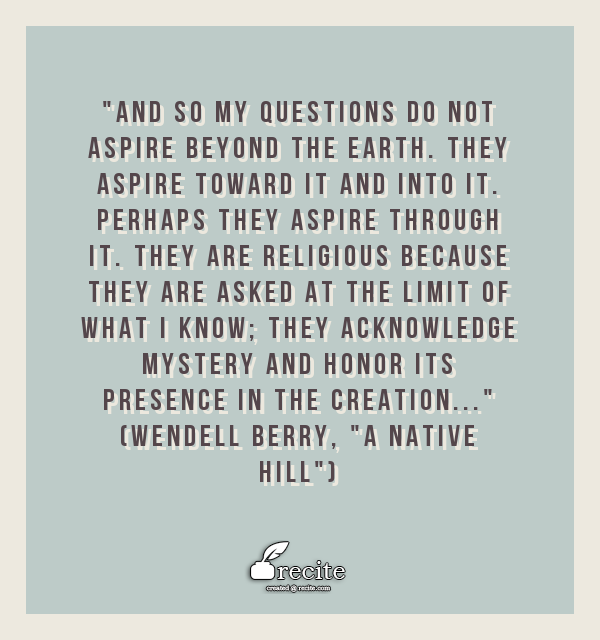 I don't know how long we'll get to live here, or where we'll move next.  On a regular schedule of about every-other-day I mourn and then celebrate that reality.  On the mourning days, I can't imagine a life worth living apart from Central Market, Alamo Drafthouse, and Texas bluebonnets each spring.  Even more, I mourn leaving the generally happy hum of Austin.  There's plenty of grumpiness, just like any where, and especially on the God-forsaken roadways.  Somehow, though, the grumpiest, aloof-est hipster in Austin is still far more cheerful than your average neighbor in, say, upstate New York.

As proof: Even when the heat is hellish, an Austin citizen will act like a small body of stagnant, lukewarm water is as refreshing as the crystal sea itself.

So, when Brian and I surf the internet looking for a place that will welcome our uniquely-purposed selves into their place, I look for a hint of cheerfulness in their eyes.  A hint of Austin's bravado and fearless creativity.

But, I'm not going to lie, I'm looking for a bit of that New York realism, too.  I'm looking for a place where people know also how to stop dreaming up big ideas long enough to collapse around a bonfire with cheap beer and someone's camp guitar. I'm talking about a beer that's so cheap it doesn't know enough to be ashamed of its generically brewed, unexamined and uncrafted origins. 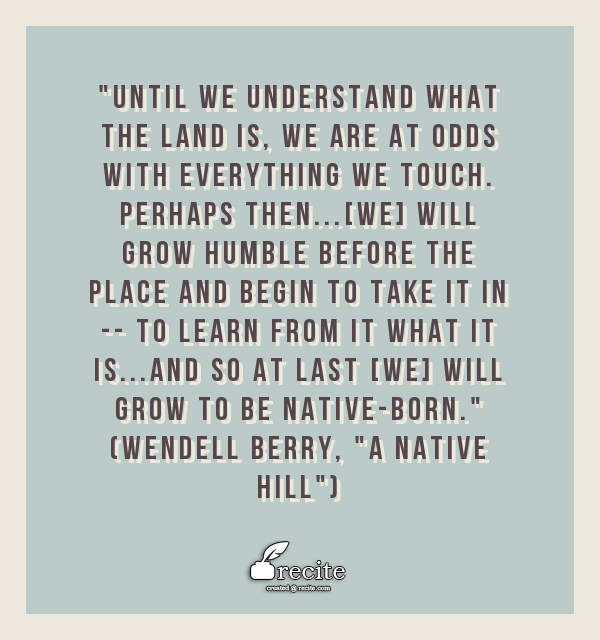 Even doing my best, I've had a hard time really getting to know the land of Austin.  For pete's sake, I'm still afraid to walk through the grass here, for fear of fire ants and godknowswhatelse.  Also, Texas grass is not nearly as enjoyable to the bare foot as my hometown turf.

We've done our best to know the land. We've floated a few rivers, swam the spring-fed pools, hiked a hill or two, tried our hand at vegetable gardening. I can't say I'm ready to lay under a pile of leaves (if one could be found) like Mr. Berry, but I could stare at the big sky for hours on end from a thoroughly-inspected (for critters) perch.  When we drive anywhere outside the city limits I try to look generously at the landscape to understand the code of beauty in this giant state.  Every once in awhile I'm rewarded, most especially when we happen to be in the hill country.

I give a begrudging respect to the cacti that crowd our neighbors' sidewalks, but I would never call them beautiful.  The Texas sun is more punishing than life-giving.  Too much of a good thing, I guess.  The river and creek beds more often brown than liquid. The gnarly, shrubby trees are not very beautiful, but at least provide little tents of shade we all huddle under when we try to spend time outdoors.

I'm going to just say it with my New York bluntness:  Texas feels pretty ugly to me most of the time.  It's been harder on my spirits than I like to admit.  I don't have a frame of reference for limestone and cacti and sunshine that bleaches the world a sudsy-grey. There's nothing in my cache of sentimental memory to link me to the hard soil of this land.

But as long as we live here, I'll be working to remedy that.

Last weekend, Brian and I sat under the stars with friends.  We listened to some California-bred hippy musicians and passed around a bottle of Prosecco. After a glass or two, I slipped out of one flip-flop and scrunched toes into a little pile of soft grass. And I promised to myself to keep trying to grow humble in the presence of the big sky and to learn from the hospitable energy of this place.

And I remember again: every step can be an arrival, every arrival a resurrection.

[currently reading with the Liturgy of Life Reading Group]