1.  I've been pondering rainy days this week.  This narrative piece was inspired by a rainy day that didn't stay rainy.
2.  The major theme of the narrative is God's revelation of Himself as faithful in the middle of confusing circumstances -- a good reminder for these days.
3.  We've been working through the book of Genesis in church this month!
4.  It even happened on a Thursday morning. Perfect, right? 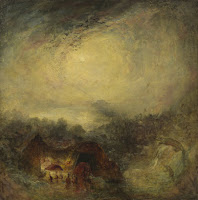 Pre-service:
Graphic:
The Evening of the Deluge by Joseph William Mallord Turner

8:35 - Cue Phone
(At this point Brian and Tamara should be scrambling to get out the door to get to work on time. Make sure they do NOT have their coffee yet so they will be able to be fully cranky at the top of the service.)

8:36 - Band vamps on opening to "Rainy Day Blues"
(This should play underneath Brian's conversation with the realtor. Keep Brian's vocal above band mix so all can hear him answer discouraging question after discouraging question from potential buyer regarding flaws of the house. Cut to occasional shots of Tamara sitting in the car. Through the raindrops on the windshield, we see her frantically checking the time every couple of seconds while casting anxious and angry looks toward the open door of the house.)

8:45 - Cue band and vocals for "Why Does It Always Rain on Me"
(We hear the music while we see Brian and Tamara backing out of the driveway. As the van makes it's way toward the highway we see through the windshield -- and windshield wipers -- Brian and Tamara arguing -- using large hand gestures and "I told you so" expressions.)

(We see Brian and Tamara apologize to each other. A moment later Tamara hits play on the Daily Audio Bible podcast.)

Genesis 8 (The Message)
Then God turned his attention to Noah and all the wild animals and farm animals with him on the ship. God caused the wind to blow and the floodwaters began to go down. The underground springs were shut off, the windows of Heaven closed and the rain quit. Inch by inch the water lowered.After 150 days the worst was over.

On the seventeenth day of the seventh month, the ship landed on the Ararat mountain range. The water kept going down until the tenth month. On the first day of the tenth month the tops of the mountains came into view. After forty days Noah opened the window that he had built into the ship.

Insert graphic: "Noah's Dove" by 14 year old artist from Belorussia
He sent out a raven; it flew back and forth waiting for the floodwaters to dry up. Then he sent a dove to check on the flood conditions, but it couldn't even find a place to perch—water still covered the Earth. Noah reached out and caught it, brought it back into the ship.

He waited seven more days and sent out the dove again. It came back in the evening with a freshly picked olive leaf in its beak. Noah knew that the flood was about finished. 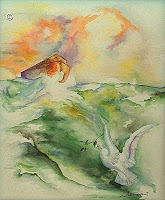 He waited another seven days and sent the dove out a third time. This time it didn't come back.

In the six-hundred-first year of Noah's life, on the first day of the first month, the flood had dried up. Noah opened the hatch of the ship and saw dry ground. By the twenty-seventh day of the second month, the Earth was completely dry.

God spoke to Noah: "Leave the ship, you and your wife and your sons and your sons' wives. And take all the animals with you, the whole menagerie of birds and mammals and crawling creatures, all that brimming prodigality of life, so they can reproduce and flourish on the Earth."

Noah disembarked with his sons and wife and his sons' wives. Then all the animals, crawling creatures, birds—every creature on the face of the Earth—left the ship family by family.

Noah built an altar to God. He selected clean animals and birds from every species and offered them as burnt offerings on the altar. God smelled the sweet fragrance and thought to himself, "I'll never again curse the ground because of people. I know they have this bent toward evil from an early age, but I'll never again kill off everything living as I've just done.
For as long as Earth lasts, planting and harvest, cold and heat, Summer and winter, day and night will never stop."

Genesis 9
God blessed Noah and his sons: He said, "Prosper! Reproduce! Fill the Earth! Every living creature—birds, animals, fish—will fall under your spell and be afraid of you. You're responsible for them. All living "But your own lifeblood I will avenge; I will avenge it against both animals and other humans.
Whoever sheds human blood, by humans let his blood be shed, Because God made humans in his image reflecting God's very nature. You're here to bear fruit, reproduce, lavish life on the Earth, live bountifully!"

Then God spoke to Noah and his sons: "I'm setting up my covenant with you including your children who will come after you, along with everything alive around you—birds, farm animals, wild animals—that came out of the ship with you. I'm setting up my covenant with you that never again will everything living be destroyed by floodwaters; no, never again will a flood destroy the Earth."


9:15 - Cue Rainbow in the Sky
(Wait until the van hits the crest of Twist Run Road. Brian and Tamara cut audio and crane their necks out every possible window space to see the full arch of the full color display. Keep house lights dim so that all 5 colors - red, green, blue, indigo and violet -- are clearly seen.)

9:18 - Cue band for Great Is Thy Faithfulness; insert graphic: "The Covenant with Noah" stained glass

(As the windshield wipers slow down through the drizzle, see close-up of Brian and Tamara's faces expressing repentance and peace. )

*note: I'm not kidding you. The minutes may be a little bit off, but this is how it went down on our way to work last Thursday. Call me humbled -- and amazed.